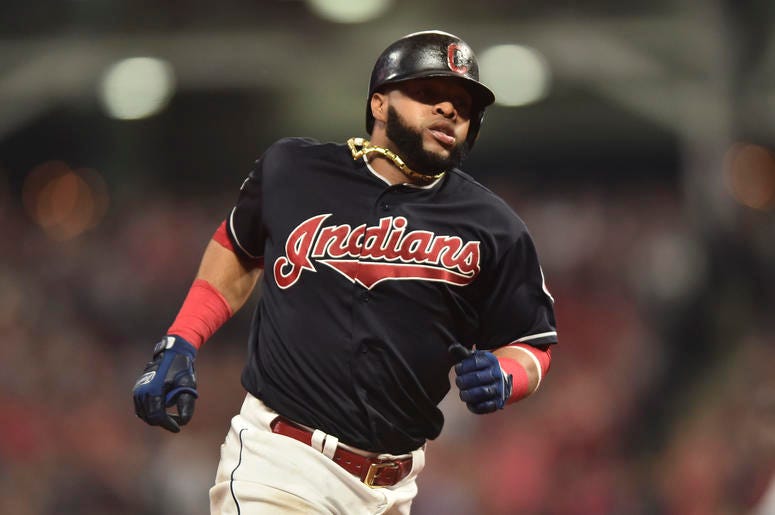 CLEVELAND (92.3 The Fan) – The Cleveland Indians said they wanted to remain competitive in 2019 and beyond. On Thursday, they made a move to facilitate that.

Cleveland is sending Edwin Encarnacion to the Seattle Mariners, plus Yandy Diaz and Cole Sulser to the Tampa Bay Rays in a three-team deal.

The Indians will be reunited with Carlos Santana, who spent the first eight seasons of his career in Cleveland before signing with the Philadelphia Phillies last year. The Mariners are also sending $6 million in cash considerations to the Indians.

Cleveland also receives 23-year-old first baseman Jake Bauers. He was the fifth-ranked prospect in the Rays organization a year ago and was called up in June. Bauers posted a .201 batting average, hit 11 home runs and had 48 RBI in 96 games. He led American League rookies in walks with 54. Bauers finished fourth in doubles, eighth in runs scored and RBI among first-year AL players. Bauers was picked in the seventh round of the 2013 MLB Draft.

It’s hard not to like this trade for the Indians, though it feels like this is just the beginning.

.@Ken_Rosenthal on @MLBNetwork re: #Indians: Says he still thinks they're likely to trade either Kluber/Bauer following Encarnacion/Santana trade: "It seems to me, they're still going to trade one of those pitchers."

The Indians traded the 35-year-old Encarnacion, a player who was in the final year of his contract, for Santana and $6 million in cash considerations. Santana is still a talented player, who is younger (33 next season) and has multiple years left on his contract. He finished with 24 home runs, 86 RBI and posted a .229 batting average last season in Philadelphia. Santana reportedly is "thrilled" to be returning to Cleveland and never sold his home. He can be an important part of a winning Indians team in 2019 and 2020.

Cleveland would’ve had to pay Encarnacion $25 million to play for them in 2019, when you add in his $5 million buyout for 2020. Instead of doing that, they’ll pay Santana $29 million over the next two seasons – the $35 million Santana is owed, offset by the $6 million from the Mariners.

The second part of this trade was Diaz and Sulser for Bauers. Diaz has a chance to be a nice player, but he lacks power at the plate and probably doesn’t have the upside Bauers does. Bauers showed flashes last season and was expected to start for Tampa Bay in 2019. He has more major league at-bats than Diaz and should be ready to contribute right away. Tampa Bay must be high on Diaz and Sulser because they sent $5 million to Seattle to help facilitate the trade.

Trading for Bauers does make you wonder about Yonder Alonso’s future with Cleveland. Could they trade his $8 million contract for something of value? If not, Bauers could play in the outfield. He played a combined 20 games in left field and right field for Tampa Bay last season.