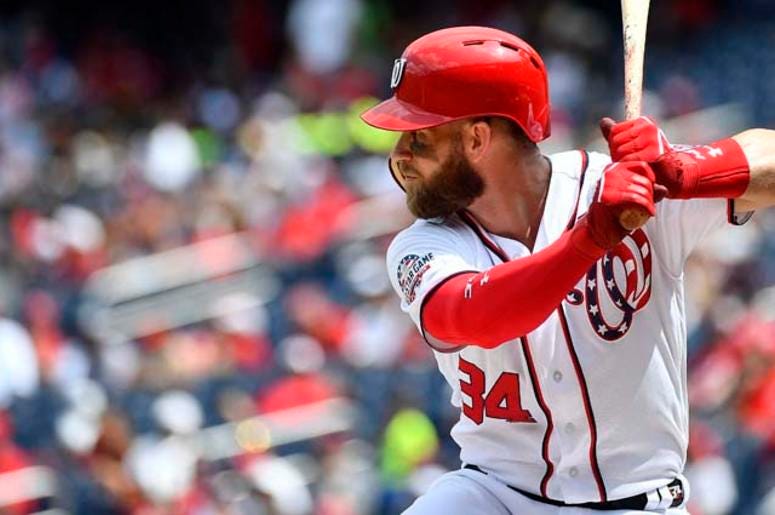 Philadelphia—and the baseball world as a whole—was already growing tired of waiting for Bryce Harper and Manny Machado to make their free-agent decisions. Now that a surprise Eagles run is over, attention will only shift more to the Phillies, who are looking to top off what has already been an active offseason.

The good news, from a Phillies perspective, is that the organization’s meeting with Harper in Las Vegas Saturday appears to have been very productive. USA Today’s Bob Nightengale went as far as saying that the Phillies are now seen as the “clear-cut favorite” to sign the six-time All-Star.

The question then becomes whether the Phillies are more keen on making a historic investment in Harper, rather than Machado, who visited Citizens Bank Park with his wife and agent on Dec. 20. For much of this offseason, the belief has been that while the Phillies, like every team in the league, value the skill sets of both Harper and Machado, they would sign Machado in their ideal world. But things are always fluid during negotiations.

With that said, MLB.com’s Todd Zolecki says that the Phillies enjoyed their meeting so much with Harper that it may have tipped the scales in his favor over Machado:

“Two sources told MLB.com on Sunday that the Phillies presentation and meeting went well. So well, in fact, that the Phillies may be shifting their focus from Machado to Harper, although it is unknown if the club made a formal offer to Harper before leaving town.”

“I think it (the meeting with Harper Saturday) was really positive,” Middleton told a group of reporters, including Jeff Skversky of 6 ABC. “He’s got a wonderful wife, we really got to see the man, after we got to watch the player play for years. We got to understand what he would be like in the dugout, the clubhouse. He and his wife are a really impressive young couple. (They are) really committed to each other, and committed to their family and committed to the community. So it was really a good day to spend time with them.”

The market for Harper still isn’t exactly clear. The New York Yankees, who many spent years predicting would sign Harper, seemingly haven’t been interested. The Chicago Cubs don’t have the financial flexibility currently, despite Harper’s friendship with former National League MVP Kris Bryant. And the Los Angeles Dodgers, the closest that Harper has to a hometown team, have yet to jump in feet-first to the Harper market, making you think they may never do so.

Nightengale spoke with some in the Nationals organization who viewed a reunion with Harper as a “longshot,” unless he took a significant hometown discount. Given that Scott Boras is his agent, that’s seems extremely unlikely. Passan says that the Nationals “remain a possibility for Harper,” though after an offseason where the Nationals have spent significant money elsewhere - headlined by a six-year/$140 million deal with Patrick Corbin - it feels important to make a distinction between possible and likely.

The Chicago White Sox—who Passan says have offered Machado a lucrative eight-year deal—don’t seem to be as focused on Harper. That could change, but simply by the process of elimination, it’s not hard to see how the Phillies have become the favorite for Harper.

Without knowing what the Phillies offer for Harper will ultimately be, it feels like we’ve reached a crucial time of one of the most anticipated free-agent classes in baseball history. Harper, as far as we can tell, probably isn’t going to sign in the next week. But with pitchers and catchers set to report to Spring Training in less than his month, Harper and his representation would seem to have to begin to have more advanced discussions with suitors in the coming days. If the most serious competition the Phillies have for Harper is the Nationals, that would seem to bode well for their chances of landing Harper.

And maybe it even leaves the door open for the unlikely scenario that the Phillies sign both Harper and Machado.