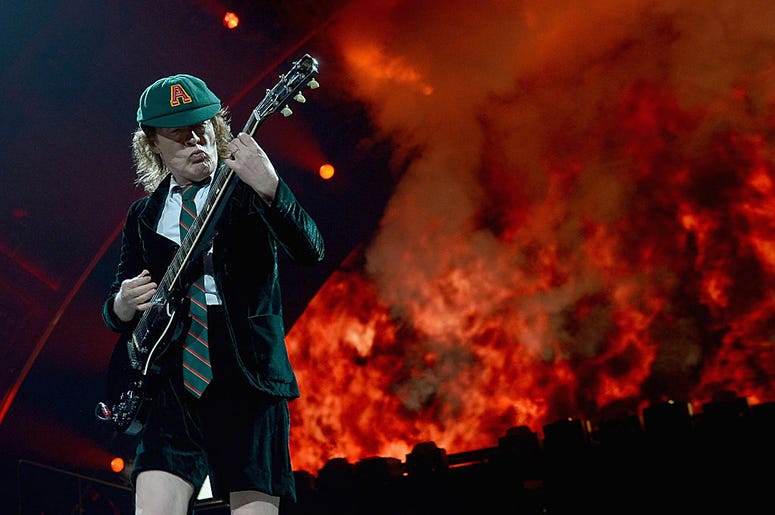 The album, a follow-up to 2014's Rock or Bust, pays tribute to the band's late co-founder, rhythm guitarist Malcolm Young, who died from complications of dementia in 2017 at age 64. AC/DC lead guitarist Angus Young, Malcolm's brother and fellow co-founder, has explained that most of the songs on Power Up were based on material that he and Malcolm wrote during a prolific period prior to the recording of AC/DC's 2008 album, Black Ice.

AC/DC's future seemed uncertain at the end of the band's Rock or Bust tour in September 2016. Singer Brian Johnson had been forced to retire from touring in the middle of the trek because of hearing issues; longtime drummer Phil Rudd had gotten into serious legal trouble, which led him to be replaced for the entire trek by one-time AC/DC beat keeper Chris Slade; and bassist Cliff Williams had announced his retirement from touring at the end of the outing.

However, after Malcolm died, Angus realized he had a lot of solid unreleased AC/DC material, and proceeded to reassemble the band for a new album that would pay homage to his brother. All of the surviving members of AC/DC's Back in Black lineup took part in the Power Up sessions -- Angus, Johnson, Rudd and Williams -- as well as Angus' and Malcolm's nephew, Stevie Young, who joined the band in 2014 as his uncle Malcolm's replacement.

Fans got their first taste of Power Up in early October, when lead single "Shot in the Dark" was released. It currently sits at #1 on Billboard's Mainstream Rock Songs chart. AC/DC also debuted another Power Up song, "Realize," earlier this week.