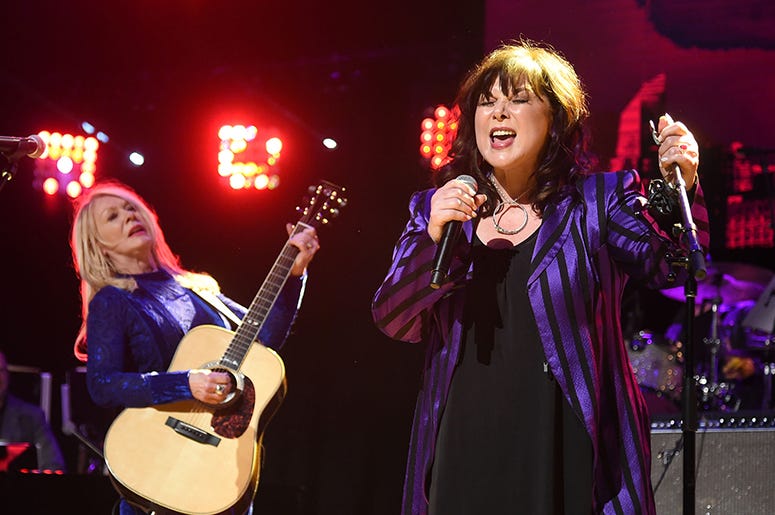 Heart frontwoman Ann Wilson has revealed that a biopic about the famous band she leads with her sister Nancy currently is in the works.

During a recent interview with satellite-radio host Lyndsey Parker, Wilson reported that the film currently is being written by her fellow Seattle native Carrie Brownstein, of the indie-rock band Sleater-Kinney and the IFC comedy series Portlandia, who also will direct the project.

"I saw the first draft of [Brownstein's] script, and it's really cool," Ann said, adding that the project is being produced by Lynda Obst, whose credits also include such successful movies as Sleepless in Seattle and Flashdance.

Wilson also told Parker that the production's looking for actresses to portray her and Nancy, while admitting that she doesn't have anyone particular in mind she'd like to see play her. She did reveal that Anne Hathaway had expressed interest in the part, but said, "I don't think she's exactly right for it."

As for whether the actress chosen for the role will do her own singing or lip-sync to Wilson's vocals, Ann said she isn't sure, noting that the project is "still in development" and has been slowed down by the COVID-19 pandemic.

Regarding the time period that will be covered by the movie, Wilson reported, "The script… started in childhood and ended up in the '90s."

Last month, Wilson released a cover of veteran Americana artist Steve Earle's 2004 song "The Revolution Starts Now" as a digital single, and plans to release the track as part of a limited-edition red-vinyl single due out December 16 that features a rendition of Alice in Chains' "Rooster" on the B-side.

music
New signature Kirk Hammett and 'Dimebag' Darrell guitars announced
music
You won't believe how much Cardi B spends on her music videos
music
YFN Lucci turns himself in to Atlanta Police, drops music video
music
Backstreet Boy Nick Carter and his wife are surprised to be expecting their third child
music
Demi Lovato will share details of 2018 overdose in YouTube docu-series, 'Dancing with the Devil'
music
Lee Brice partners with Yuengling beer to support veterans