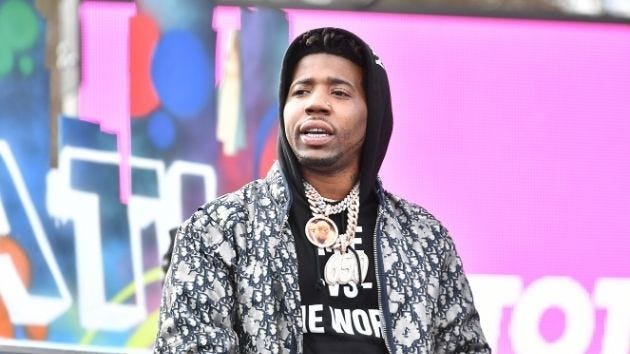 YFN Lucci turned himself in to authorities on Wednesday, an Atlanta Police spokesperson confirmed to multiple outlets.

The rapper, born Rayshawn Lamar Bennett, was suspected to be involved in a shooting that left one dead and another injured last month. He was booked on murder charges and is at the Fulton County jail.

The 29-year-old is facing multiple charges including felony murder, aggravated assault, participation in criminal street gang activity and possession of a firearm during the commission of a felony.

Hours before Lucci handed himself over, he dropped the official music video for his track "Rolled on (feat. Mozzy)" off of his album Wish Me Well 3, which is out now.

Two others, 23-year-old Ra'von Boyd and 17-year-old Leroy Pitts, were already arrested in Miami in connection with the fatal shooting. They were booked for felony murder.

The arrests are in connection to an incident that occurred on December 10 where officers responded to calls of a person shot and found James Adams, 28, lying in the street with a gunshot wound to his face. Adams was taken to a local hospital where he died.

A short time later, a second victim, Kevin Wright, 32, arrived at an area fire station with a gunshot wound to his abdomen, the report states. Investigators determined the two shootings were related.