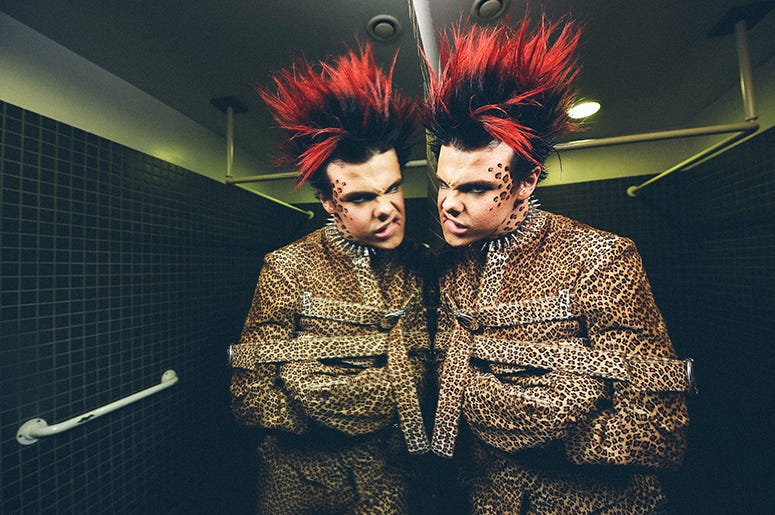 As promised, YUNGBLUD has dropped his new song "acting like that," featuring Machine Gun Kelly and Travis Barker. He's also made a major statement about his sexuality.

“‘acting like that’ is a result of what happens when me, MGK and Travis get together, the energy’s electric and we write songs that amplify a feeling," YUNGBLUD says in a statement.

"This song radiates just going f***ing nuts at your favorite show, a feeling that we all need right now," he adds. "This song is about losing control and feeling free with your best f***ing mates.”

"acting like that" is from the U.K. artist's upcoming album, WEIRD.

Meanwhile, YUNGBLUD is on the cover of the British magazine Attitude. Inside, he reveals that he now considers himself part of the LGBTQ community, describing himself as polyamorous and pansexual, and saying he's "hooked up" with men in the past. He adds that dating Halsey, who's openly bisexual, helped him come to terms with his own sexuality.

"Even though she is not a man, she made me go, ‘Oh my God, I probably like am into that,'” Yungblud explains, adding that Halsey "changed my whole perception of what love could be."

"It didn’t work out in the end because we’re better as friends and I think that’s what it was -- we’re, kind of, very the same, so that was weird for us," he adds. "I probably would say now, I am polyamorous. Before I didn’t f***ing know what I was."

Speaking about identifying as LGBTQ, this singer explains that at first, "I wasn’t into that idea – like, my sexuality is mine and I’m proud of it. But... I probably would say that, yeah, because I f***ing don’t know, I love everyone, I’m attracted to everyone.”