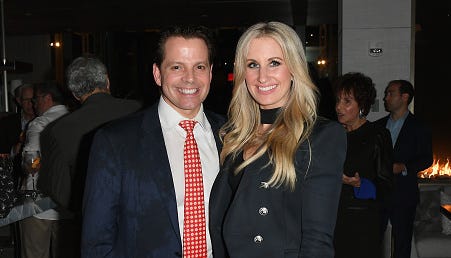 Anthony Scaramucci may be going from working in the White House to the Bravo Clubhouse.

The former White House Director of Communications's wife, Deidre Scaramucci, is allegedly in talks to join the cast of the "Real Housewives of New York City."

“Scaramucci’s wife is doing the ‘Housewives.’ They’ve been wanting new blood and have been striking out with new cast members. She’s been meeting with Bravo,” a source told Page Six.

There have been rumors that Bravo is looking to shake-up the cast of the Big Apple edition and adding Scaramucci’s wife could be the “reality gold” producers are searching for.

Should Scaramucci get the gig, there’s a good chance fans would see The Mooch pop up from time to time, since he’s no stranger to reality television having appeared on "Celebrity Big Brother" earlier this year.

Married to Scaramucci since 2014, Scaramucci filed for divorce in July 2017 while nine months pregnant with the couple’s second child. Four months later, they reconciled, and she dropped the divorce proceedings.

The pair currently work together on RADIO.COM's podcast, “Mooch and the Mrs."

According to Page Six, producers may be looking to replace Tinsley because they reportedly think her fledgling dating life has become stale, while Countess LuAnn is allegedly also on the chopping block for wanting a large salary increase now that her cabaret act has become a hit. Barbara is also said to be on the outs.

Both Ramona and LuAnn have been on the New York franchise since the show’s start in 2008, so firing either of them would be controversial to say the least.

Bravo has yet to confirm any of the casting reports.