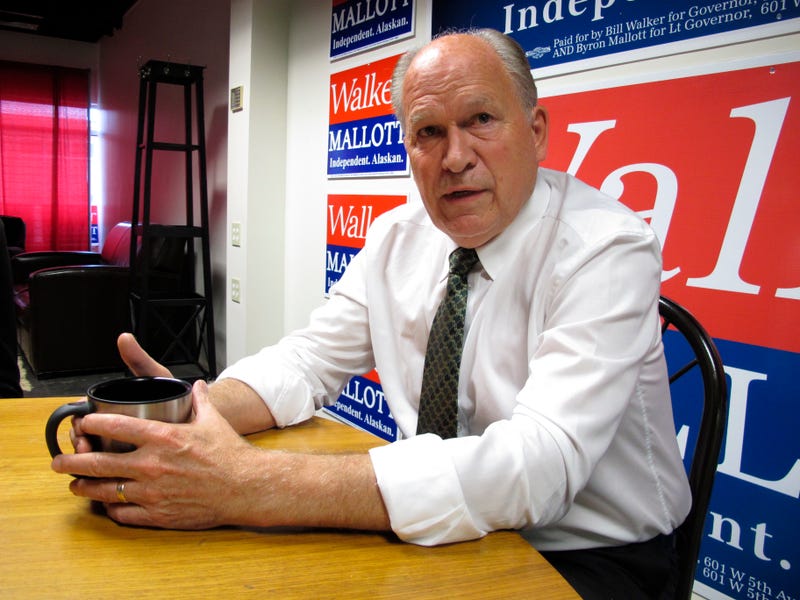 ANCHORAGE, Alaska (AP) — The path to the governor's office in Alaska this year may very well hinge on the oil check given to state residents.

Each year, the state distributes checks just for living here — residents' share of the state's oil wealth. For some, it's discretionary money used for new toys, like big screen TVs, or socked into savings, while for others, particularly those who are lower-income or who live in high-cost rural Alaska, it's a part of their income.

The checks went out like clockwork until 2016, when in the midst of legislative gridlock over how to address a multibillion-dollar budget deficit Gov. Bill Walker cut the size of everyone's check by about half. He defended the move, along with additional budget vetoes, as necessary to preserve the state's savings. Everyone could still get a check, he said, just not as big.

His action, upheld by the state Supreme Court, set a precedent: Since then, lawmakers have not followed the formula in state law for calculating the Alaska Permanent Fund dividend checks. Some have insisted doing so, while the state is still in a deficit, would be fiscally reckless. But the decision has brought with it political backlash, which Walker, an independent, hopes to withstand as he faces a tough re-election bid against conservative former state Sen. Mike Dunleavy and Democratic former U.S. Sen. Mark Begich.

Dunleavy said people are angry that a decision of that magnitude was made without their involvement. He supports the formula in state law for calculating the check and does not support changing that without public involvement, including an advisory vote. That's because if the Legislature passes taxes or changes to the checks and citizens don't agree, they can pursue a referendum to try to overturn them, he said.

Money for the checks comes from the earnings of the oil-wealth fund, the Alaska Permanent Fund. Legislators have long resisted using fund earnings to pay for state government. But after blowing through billions of dollars in savings amid gridlock over how best to fill the deficit and shunning taxes, they ran short of options and agreed earlier this year to start using fund earnings to fill much of the hole.

The fund's principal is constitutionally protected, but earnings can be spent with a simple majority. Begich favors moving billions of dollars from fund earnings to the fund's principal to ensure it isn't "subject to the whims of elected officials" and limiting the amount withdrawn each year based on a percentage of the fund's market value. Part of the money drawn would go toward a dividend and part would go toward funding public education.

He said the dividend should be constitutionally protected, an issue he said he would make a priority.

"You have to get that Permanent Fund Dividend issue resolved one way or the other," he told a small group at a Juneau meet-and-greet last week. If not, lawmakers will keep fighting over it and won't have time to think about other long-term issues, he said.

Walker said he's not opposed to enshrining some form of dividend in the constitution. But he doesn't want to see an upper limit and whatever is settled on should be sustainable, he said.

The permanent fund is a nest egg, seeded with oil money and grown through investments. Lawmakers settled on a check of $1,600 for this year. That's about $1,050 less than what Walker's budget office earlier this year predicted the amount would be if a full dividend were paid out.

Lt. Gov. Byron Mallott, a Democrat, said Walker's action saved the dividend for the future. He said it allowed for passage of legislation calling for structured withdrawals of permanent fund earnings.

"And many, many, more Alaskans understand that than those who are trying to create a crisis from it," Mallott said.

The bill retained the existing formula in state law for calculating dividends but since that has been ignored the past three years, there's no guarantee it will be followed in the future.

Monte Wallace, a Dunleavy supporter, said the Wasilla Republican "will give our PFD back to us." PFD is permanent fund dividend. She said Walker has "destroyed Alaska, the way it was," citing concerns she has with crime.

Therese Thibodeau, who attended Begich's coffee shop meet-and-greet in Juneau and said she's registered with the Green party, said she supported Walker in 2014 and appreciated his action on the dividend. "I thought that's a good thing," she said.

She said she was pleasantly surprised, though, by what she heard from Begich, particularly his thoughts on the budget. "Now, I'm more on the fence than I was when I walked in," she said.