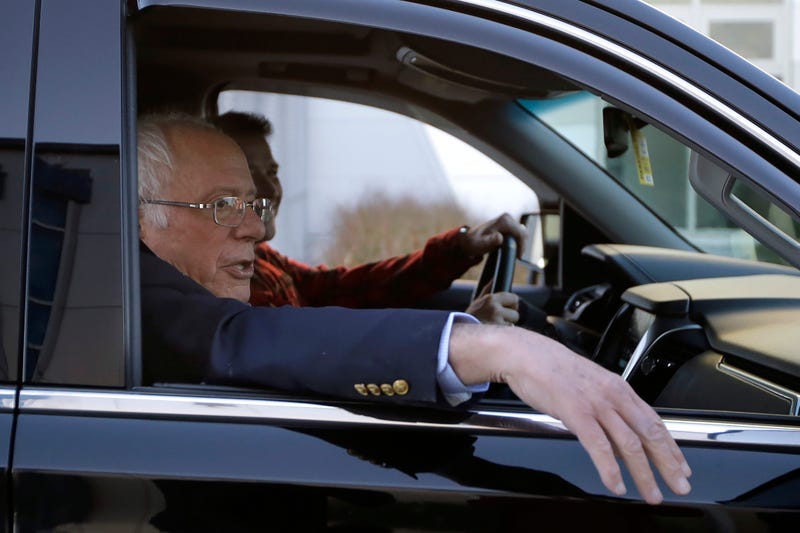 The Lee & Martin Funeral Home in Burgettstown, Pennsylvania, says Riggs died Saturday, the day Sanders returned to Vermont after suffering a heart attack. Her obituary said she was diagnosed with neuroendocrine cancer.

Riggs, a neuropsychologist, was married to Levi Sanders, who ran unsuccessfully for a New Hampshire congressional seat in 2018. Riggs' obituary says she met Levi Sanders while the two worked at an emergency food shelter in Vermont.

The obituary said Riggs was the director of behavioral medicine at Dartmouth Medical School for several years, and she started the Palliative Care Department for Dartmouth Medical Center. She also owned Riggs Geriatric Psychology in Windsor, Vermont.

Riggs and Sanders had three children.

Meanwhile, Sanders began the slow process of reintroducing himself to the 2020 campaign on Tuesday, venturing outside his Vermont home briefly to say he'd been more fatigued than usual in recent weeks and was boneheaded for ignoring symptoms that might have foretold his heart attack last week. But he provided no hints on how he'll restart his suspended White House bid.

"I must confess, I was dumb," the 78-year-old Vermont senator said, speaking in soft, calm tones with his wife, Jane O'Meara Sanders, looking on behind him. "Thank God, I have a lot of energy, and during this campaign I've been doing, in some cases, three or four rallies a day all over the state, Iowa, New Hampshire, wherever. And yet I, in the last month or two, just was more fatigued than I usually have been. And I should have listened to those symptoms."

Sanders' campaign has said he will be at next week's Democratic presidential debate in Ohio. But it hasn't commented on if or when he'll resume campaigning before that — or what his next steps will be.

His health problems come at a precarious time, since Sanders was already facing questions about being the oldest candidate seeking the White House, and has seen his recent poll numbers decline compared to 2020 rival Elizabeth Warren, his chief competitor for the Democratic Party's most-progressive wing.

Sanders also recently shook up his campaign staff in Iowa and New Hampshire, which kick off the presidential nominating process.

Supporters privately conceded that the timing of the heart attack — which came just as the impeachment inquiry against President Donald Trump was escalating — helped limit the political fallout. But they also acknowledge that he will have to more directly address lingering health concerns then, if not before.

Last week began on a high note when Sanders announced that he'd raised $25.3 million during the year's third quarter, more than Warren and any other Democratic presidential hopeful. But word of that was overshadowed hours later, when Sanders was at a campaign event in Nevada, experienced chest discomfort and was taken to a hospital, where he was diagnosed with a heart attack.

Doctors inserted two stents to open up a blocked artery in his heart. Sanders left the hospital on Friday and flew home to Vermont the following morning.

"It wasn't a major heart attack. He had a minor heart attack. The stents will be extremely helpful in terms of blood flow. I assume he'll be far more vigorous," said RoseAnn DeMoro, a Sanders' confidante and former executive director of National Nurses United. "Heaven help the opposition."

His campaign noted that he had $33.7 million in cash on hand in the quarter that ended last month and, on Monday, he released a plan to impose stricter campaign finance limits. The plan was in the works for weeks before Sanders took ill, advisers say, but they declined to comment on the effectiveness of campaigning via press release — simply issuing policy statements without a candidate out there campaigning to back them up. Surrogates have taken Sanders' place on the campaign trail in the meantime, including Carmen Yulín Cruz, mayor of San Juan, Puerto Rico, who visited New Hampshire on Saturday.

Sanders said Tuesday that he would be meeting with the cardiologist on a regular basis and getting some checkups, but that his main doctor is in Washington, meaning he didn't have a physician in Vermont, "let alone a cardiologist." He previously promised to release his medical records and reiterated that Tuesday, saying, "We will release them at the appropriate time."

Sanders has been active in recent days communicating with his staff and broader network of longtime supporters. Those who have spoken to him say he is quick to shout down questions about his health, insisting that he's fine — and that he vowed to remain committed to the 2020 race in a Monday conference call with his entire campaign staff, rather than entertain notions that his health might force him to quit the race. Supporters also say the campaign has seen a surge in fundraising while he recuperates — though the campaign hasn't released figures to quantify that.

Still, Sanders advisers say he will reduce the pace of his campaign schedule in the short term at least — and that's among several changes likely as senior staff work with Sanders's wife to balance health concerns with the demands of a presidential campaign.

National campaign co-chair Nina Turner spoke with Sanders at length on Tuesday during a call with his four national co-chairs. She said his message was simple: Sanders remains committed to his presidential campaign and the policies like "Medicare for All" that he has championed.

"We're going to look at everything — the whole campaign in its totality — and make adjustments where necessary," Turner said in an interview. "But make no mistake, Sen. Bernie Sanders is as committed — more so, even more now than he always has been, if that's even possible."