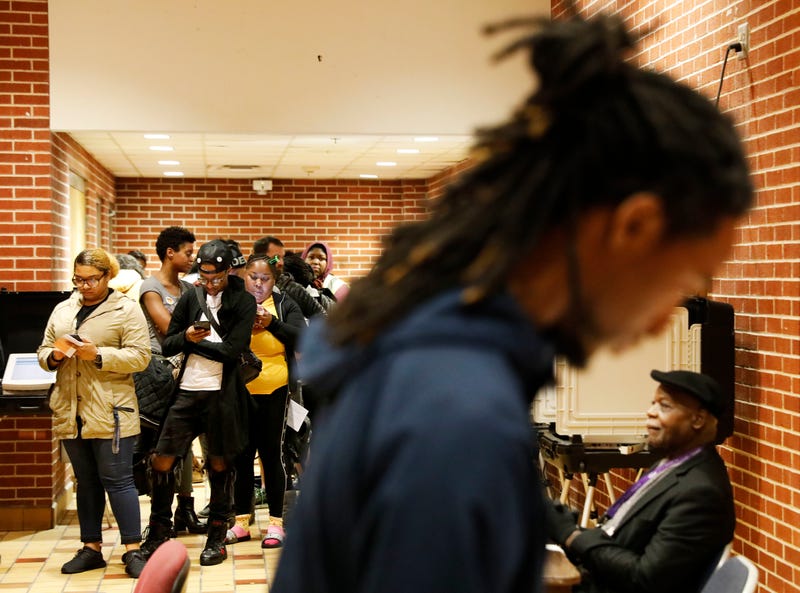 Photo credit Voters wait in line on election day after an order issued in Fulton County Superior Court ordered the polling location to remain open until 10 p.m., a full three hours after polls closed statewide, in Atlanta, Tuesday, Nov. 6, 2018. A judge has extended voting hours at more polling locations in Georgia, where some voters have complained of waiting for hours in long lines. (AP Photo/David Goldman)
By The Associated Press
November 8, 2018 11/08/2018 3:13 am

ATLANTA (AP) — Malfunctioning voting machines, missing power cords and hourslong lines at the polls are being scrutinized by candidates and election officials in Georgia, where the governor's race is undecided while votes are still being tallied.

Multiple lawsuits have been filed in the contentious race, with voting rights groups contending that Kemp has used his office to interfere in the election for his own benefit. He has fiercely denied any impropriety.

At a news conference Wednesday, President Donald Trump said he heard the voting process was "very efficient" in Georgia. But polling places across the state had long lines, and some areas of metro Atlanta that typically lean Democratic experienced problems and delays.

Ontaria Woods arrived at a polling place in Snellville, just northeast of Atlanta, about 7 a.m. Tuesday to vote. More than three hours later, she was still waiting, with roughly 75 to 100 people in line.

"That's the majority of people in this line, African-Americans," she said. "We're begging them, 'Please, stay.'"

With votes approaching 3.8 million, Kemp has just more than 50 percent of the vote, which would give him the majority threshold required for victory. But Abrams and her campaign say they believe there are enough ballots still uncounted to force a runoff. To do that, Abrams needs to pick up about 15,000 votes among an unknown number of ballots across the state, her campaign officials said Wednesday.

Some of the longest lines on Election Day formed at polling places near historically black colleges in Atlanta.

"We have a lot of college students over there, and they like to vote out of precinct," said Richard Barron, director of registration and elections in Fulton County, which includes most of Atlanta.

A court ordered extended voting hours in two polling sites near the colleges. The last voter from those sites cast a ballot about 11:30 p.m. Tuesday, Barron said.

The state elections chief wasn't immune to the difficulties: When Kemp went to cast his ballot, he had an issue with his voter card, but it was fixed quickly.

The same or similar problem affected voters in four large precincts in Gwinnett County— a populous swing county — and at least one in the Inman Park neighborhood of Atlanta, election security expert Harri Hursti said Wednesday. Voters in those places were not able to vote for hours because the electronic poll books used to check in voters were not writing to the smart cards needed to cast ballots, Hursti said.

"When those machines are down, it eliminates the possibility of voting with the touch screens," said Joe Sorenson, a Gwinnett County spokesman.

In Snellville, some machines poll workers use to check in voters didn't have power cords and ran out of batteries. Paper ballots were handed out for about 15 minutes before the issue was resolved.

"It was a human error issue," Sorenson said. "A person who packed that machine didn't pack it properly, and the person who set it up should have noticed it."

Fulton County's Barron said that although Kemp is secretary of state, "he doesn't have any say in county operations."

"A lot of people see things on social media or they are really quick to assign nefarious intentions to people, especially like my staff who are just dedicated public servants," he said. "They assign these intentions or motivations to them that couldn't be farther from the truth. I think it's unfortunate that the distrust in government has reached a point that it has."

Georgia is one of only five states that exclusively uses electronic voting machines that computer scientists have long criticized as untrustworthy because they are easily hacked and don't leave a paper trail. A federal judge in September scolded elections officials for not heeding experts' warnings and continuing to use the aging machines.

Five Georgia voters sued Kemp on Election Day, asking a judge to prevent Kemp from exercising his duties as the state's top elections official for anything having to do with Tuesday's election, including certifying results or administering any possible runoff or recount. The lawsuit says that Kemp presiding over an election in which he is a candidate "violates a basic notion of fairness."

A federal judge set a hearing for Thursday.

Separately, Common Cause Georgia filed a lawsuit Monday seeking special treatment of some provisional ballots. It accuses Kemp of acting recklessly after a vulnerability in Georgia's voter registration database was exposed shortly before the election.

Kemp "has not only failed to remedy the problem, but he has advertised the vulnerability of the system to those who may want to interfere" with voting, the lawsuit said.

Kemp's actions increased the risk that eligible voters could be illegally removed from the voter registration database or have registration information illegally altered, which could prevent them from voting, the lawsuit says.