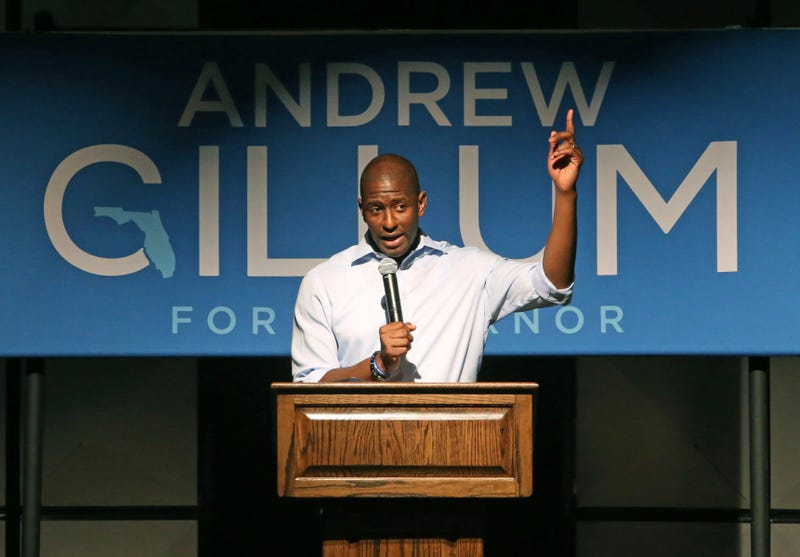 TALLAHASSEE, Fla. (AP) — Voters were deciding Tuesday whether to keep Florida under Republican control with a close Trump ally or elect its first Democratic governor since 1994 — and the first African-American — after a campaign marked by a deadly hurricane and gun violence.

Gillum's path to the nomination was a surprise, winning against four better-funded challengers. Hurricane Michael pulled him off the campaign trail in early October when it left nearly all of Florida's capital without power. He again rushed home Friday, canceling campaign events, after a man shot six people at a yoga studio, killing two before taking his own life.

DeSantis won the primary against better-known and better-funded Agriculture Commissioner Adam Putnam based largely on Trump's endorsement. Trump visited Florida twice in the final six days of the general election to try to boost turnout.

Trump's endorsement of DeSantis is one of the reasons why Anjenys Gonzalez voted for Gillum. The 43-year-old Democrat from Miami-Dade County said protecting people's civil rights is her most important issue. Gonzalez said Trump's administration "has done the exact opposite of upholding our democracy, so anybody he's endorsing clearly is in line with his policies."

In Little Havana, 34-year-old Enrique Tarrio says he chose DeSantis because the businesses he owns have flourished under Republican Gov. Rick Scott. He says DeSantis is "picking up where Rick Scott left off." Tarrio said he worries about Gillum's proposed corporate tax hike.

Taxes also were a key concern for Lou Vallande, who lives in Rockledge on Florida's Space Coast. He said he's not affiliated with any political party but chose DeSantis for governor because he's afraid Gillum would raise taxes.

In Miami Beach, Greg Freeman was among the first in line to cast a ballot for Gillum as the polls opened Tuesday morning. He took a red-eye flight from the West Coast to vote, and cited health care as a major issue because he has a pre-existing condition and has already seen insurance premiums sky-rocket.

"Health care. The ability to tell the truth. Not be beholden to money. Basically, human decency," Freeman said.

More than 5.2 million Floridians had already voted before Election Day — with Democrats casting slightly more ballots than Republicans. More Democrats voted early in 2016 also, but Trump won the state due to a GOP surge on Election Day.

This election — expected to be close — could shake up the political landscape in the nation's third largest state.

Republicans over the past 20 years have created and expanded school vouchers, passed restrictions to abortion, turned away money to expand Medicaid and pushed through the nation's first "stand your ground" law to give immunity to people who use deadly force if they feel threatened.

The last time Democrats won a Florida governor race was Lawton Chiles' re-election in 1994, and Republicans have controlled the Legislature since 1998. But the past two gubernatorial elections have been close.

Scott couldn't run for re-election because of term limits and is instead challenging Democratic U.S. Sen. Bill Nelson in one of the most closely watched Senate races. If Nelson loses, regaining control of the Senate will be extremely difficult for Democrats.

DeSantis, 40, was educated at Yale and Harvard universities before becoming a Navy officer. He won his House seat in 2012 running as a political outsider, but he clearly had larger ambitions. He ran for U.S. Senate in 2016, dropping out when Republican U.S. Sen. Marco Rubio decided to seek re-election.

"We need to protect the economic momentum that we have under Gov. Scott and under President Trump. I will keep it going and I will build on that success," DeSantis said in the closing days of the campaign.

He cast his ballot on Tuesday morning in Ponte Vedra Beach near Jacksonville.

Gillum, 39, was a 23-year-old Florida A&M University student when he became the youngest person elected to Tallahassee's city council. He was elected the city's mayor in 2014. He tells a story about a poor upbringing in Miami, and the lessons he learned about getting a good education from his mother and grandmother.

Gillum told reporters after voting in Tallahassee that he tried to keep his campaign positive, despite attacks from his opponents.

"Us winning tonight I think will send a message to Mr. Trump, and Mr. DeSantis as well, that the politics of hatred of division and separation, that they've come to an end," Gillum said.

The mayor has been hampered by allegations of corruption, based on an FBI investigation into Tallahassee City Hall, though Gillum has said he's not a target of the probe.

The winner could play a major role in the 2020 presidential election. Florida is the largest state with a history of swinging either way. DeSantis could have a chance to return a favor for Trump, or Gillum could help boost the Democrats' nominee to challenge him.

The winner also will shape the state Supreme Court for years to come. Three justices seen as liberal will retire on the same day the governor is sworn in. DeSantis could have the chance to reshape a court that's frustrated Republicans on rulings ranging from abortion restrictions to the death penalty. Gillum could ensure the court remains more liberal.