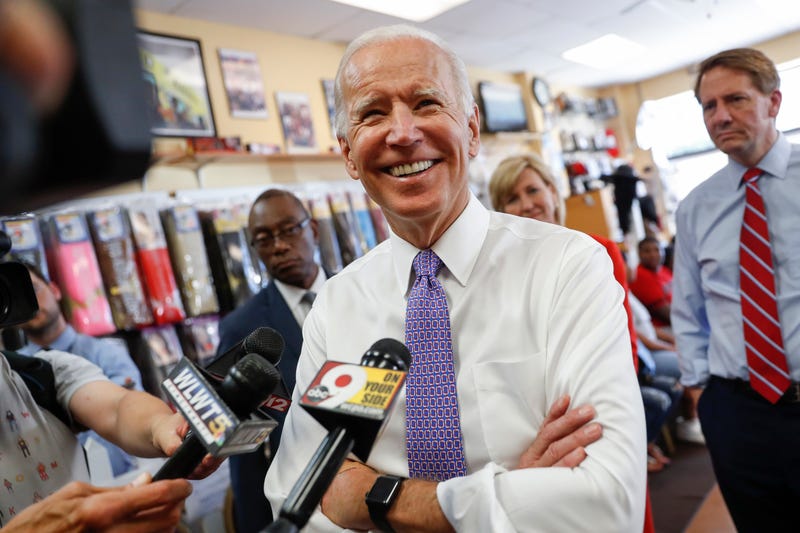 Photo credit FILE - In this June 29, 2018, file photo, former Vice President Joe Biden speaks to the media in Cincinnati. Home to the first-in-the-South primaries, South Carolina is accustomed to the parade of presidential candidates who frequent the state in hopes of boosting their national credibility. But, with eager Democrats’ open 2020 contest, that competition has begun here early, with candidates lining up visits with a frequency accelerated from years past. Biden, who has said it’ll be at least January before he decides about 2020, has been keeping an elevated profile in South Carolina this midterm cycle, even for him (AP Photo/John Minchillo, File)
The Associated Press
October 12, 2018 10/12/2018 11:07 pm

COLUMBIA, S.C. (AP) — Even by South Carolina standards, this is a lot.

There's no set date for the state's pivotal 2020 presidential primary. But that's not stopping a half dozen potential Democratic contenders from swarming the state over the next week, connecting with voters and political operatives.

The first-in-the-South primary can be a make or break contest for White House contenders from both parties. In addition, South Carolina's significant black population offers an opportunity for Democratic candidates to test their messages in a way that's not possible in other early-voting states like Iowa and New Hampshire, which have fewer minority voters.

That's especially important for a party that could field multiple candidates of color and is making diversity an explicit part of its appeal.

A look at what's happening in the Palmetto State, which could be a political ground zero for nearly a year and a half:

Biden has said he won't decide on running until at least January, but he's been keeping an elevated profile in the state. He visits Saturday for events with Democratic gubernatorial nominee James Smith and state Senate hopeful Dick Harpootlian. Harpootlian is a longtime Biden adviser who unsuccessfully tried to persuade him to enter the 2016 presidential race.

Biden, 75, has endorsed Democratic congressional candidate Joe Cunningham and even waded into a down-ballot race, backing the party's pick for state treasurer. Earlier this year, he spoke at an NAACP gathering.

Vermont independent Sen. Bernie Sanders, another possible Democratic contender, is also returning. On Oct. 20, he'll take part in a rally with the state's arm of Our Revolution, an offshoot of Sanders' campaign. He was soundly defeated in 2016 by ultimate Democratic nominee Hillary Clinton, earning just 26% of the vote.

Sanders' visit has made clear that divisions still exist among the state's Democrats following the bruising 2016 primary. The day after his visit was announced, some of the party's young leaders called the trip "extremely selfish" and self-serving, as Sanders hadn't been invited by any candidate on this fall's ballots. One said Sanders would be better off if he "got lost."

State Rep. Justin Bamberg, one of Sanders' biggest South Carolina backers, said the trip was more about continuing to push some of Sanders' top issues, like increasing the minimum wage. "The man has never said he's running for president in 2020," Bamberg said.

A slew of fresher faces are also introducing themselves to South Carolina.

New Jersey Sen. Cory Booker headlines a Democratic fundraiser in Orangeburg next week that will include many of the state's most prominent black leaders and activists. Without much of that backing, it's difficult for any Democratic hopeful to have much success in a state where black voters comprised 61 percent of 2016 Democratic primary electorate.

A day later, California Sen. Kamala Harris makes her first trip to South Carolina, with events in Columbia and Greenville. A few days before the midterm election, former Attorney General Eric Holder is set to speak to the Charleston NAACP, the same group Biden addressed earlier this year.

Oregon Sen. Jeff Merkley, the only senator to back Sanders' 2016 bid, has made several trips so far. He's delivering a keynote to state Democrats' annual convention and attending events with Rep. Jim Clyburn and as an Our Revolution town hall.

A LIBERAL STAR AND A CELEBRITY LAWYER

Massachusetts Sen. Elizabeth Warren hasn't publicized any trips to South Carolina, but recently sent a fundraising email on behalf of state Democrats. A woman who formerly served as her press secretary is the state party's new communications director.

Avenatti, who is representing adult film actress Stormy Daniels in her legal battle with President Donald Trump, has been making trips to Iowa and New Hampshire, where he's met with state-level operatives and sold-out party dinners.

Sign up for "Politics in Focus," a weekly newsletter showcasing the AP's best political reporting from across the United States leading up to the 2018 midterm elections: https://bit.ly/2ICEr3D.