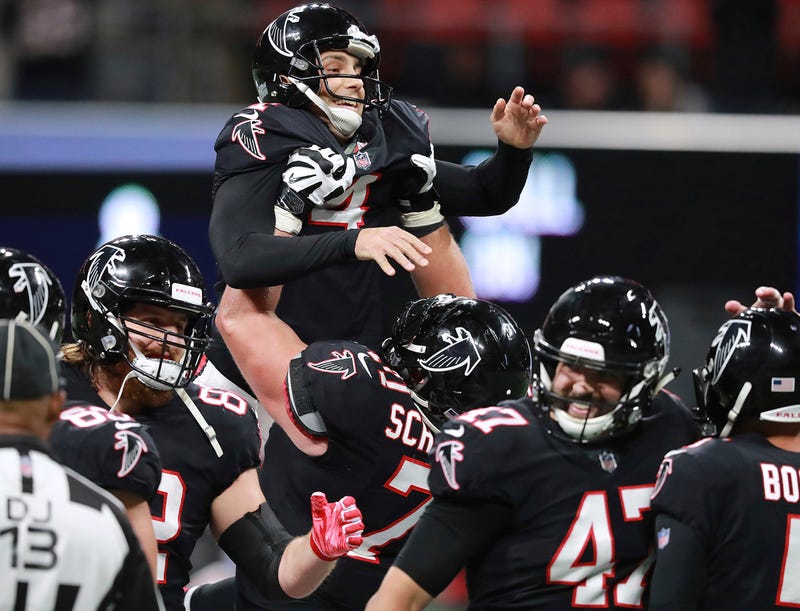 ATLANTA (AP) — The Atlanta Falcons head into a bye week feeling a whole lot better about their season.

Sure, they haven't lived up to expectations in an injury plagued campaign.

But two straight wins give them a reason to be hopeful.

Matt Ryan threw for 379 yards while completing his final 18 passes and the Falcons added another chapter to New York's miserable season, beating the Giants 23-20 on Monday night .

"You'd rather go into a bye week on a win than a loss, that's for sure," Ryan said. "We need some rest. We've got different guys banged up. All of us need to rest and refresh for the second half of the season."

The Falcons (3-4) have five starters on injured reserve, which helped send a team with Super Bowl aspirations spiraling to a three-game losing streak. They snapped that skid with a victory over Tampa Bay, and then kept the winning going against the struggling Giants.

"I don't feel like we're a 1-6 team," said Giants receiver Odell Beckham Jr. "That's what our record is, but that's not the feeling in the locker room."

It was another dynamic performance by Ryan, who was the league's MVP in 2016 when he led Atlanta to the Super Bowl.

While these Falcons haven't played to that level, their quarterback is putting up numbers that measure up to what he did two years ago: a 71.1 percent completion rate, 2,335 yards passing, 15 touchdowns and just two interceptions.

Ryan is only focused on the team's performance.

Some things to keep an eye on after Atlanta's victory over the Giants:

While Matt Bryant recovers from a hamstring injury, Atlanta's kicking appears to be in good hands.

Signed a few days before the game, Giorgio Tavecchio booted three field goals, including a career-best 56-yarder that helped seal the victory and was the longest field goal by a kicker in his first game with a new team in 40 years, according to NFL Research.

"That kick was good from about 65 yards," Ryan said. "He did a great job for us coming in on short notice."

Tavecchio also connected from 40 and 50 yards.

Even though Bryant will surely reclaim his job as soon as he's healthy, Tavecchio set himself up to draw attention from other teams when he goes on the open market again. He kicked last season for the Oakland Raiders.

BIG TROUBLE IN THE BIG APPLE

Going up against one of the NFL's worst defenses, the Giants' offense fell short again.

New York was held to two field goals through three quarters and squandered another scoring chance when Eli Manning's pass on fourth-and-goal from the 1 was swatted away . Two fourth-quarter touchdowns were surely not enough to persuade anyone in the locker room that they've figured out their season-long scoring woes.

"We know we have talent," tight end Evan Engram said. "We're doing things. We're just not putting the big picture together. That is what's frustrating."

The Giants have been held to 20 points or less in five of seven games.

"I can't give you the answer," rookie running back Saquon Barkley said. "We're not executing. We're not finishing drives. That's the gist of our season."

While he doesn't get targeted a lot in Atlanta's passing game, Hall sure has a knack of coming up with huge plays.

Last season, the diminutive receiver hauled in a 40-yard touchdown pass with his first career reception.

Against the Giants, Hall broke free down the middle of the field to score Atlanta's first TD on a perfectly thrown ball from Ryan .

Hall finished with three catches for 63 yards, giving him 10 career receptions. Of those, four have gone for at least 20 yards.

The Falcons have more injury concerns on their offensive line.

Right guard Brandon Fusco went down late in the first half with a right ankle injury. He was helped off the field by a pair of trainers and quickly taken to the locker room on a cart.

The bye week will give Fusco extra time to recover before a Nov. 4 game at Washington. The Falcons will be eager to get him back since they already lost another starting guard, Andy Levitre, to a season-ending injury.

On an otherwise forgettable night, Beckham could at least relish a piece of history .

That makes him the fastest player to reach the milestone in the Super Bowl era . He surpassed Atlanta's Julio Jones, who did it in 56 games.