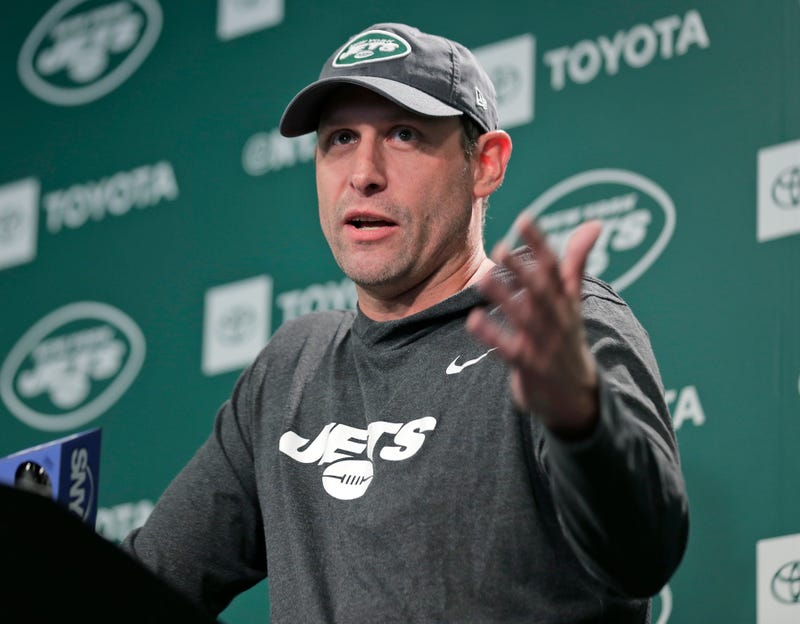 FLORHAM PARK, N.J. (AP) — Adam Gase spent most of his nearly 15-minute news conference batting down reports and rumors, while trying to set the record straight.

The New York Jets coach has been the focus of lots of conversation — most of it not good — on sports talk radio, television and social media since the team fired general manager Mike Maccagnan last Wednesday. The widespread belief is that Gase had something to do with how everything went down, that he "backstabbed" Maccagnan and forced team chairman and CEO Christopher Johnson to make a change.

"That would be false," Gase insisted Thursday during his first news conference since Maccagnan was fired. "That's just not true. Christopher made the decision."

On Monday, Gase took one question about the situation from reporters at the team's facility and said there was no power struggle between him and Maccagnan. Gase acknowledged Thursday that the two didn't always see eye to eye, but nothing unlike other NFL teams' coaches and GMs.

"The majority of the time, me and Mike were always on the same page," Gase said. "You have disagreements. There are always going to be disagreements in this profession, as far as philosophy, what you want to do player personnel-wise, but at the end of the day he had the final decision. That was his right."

Gase was then asked if he expressed to Johnson at any point that he couldn't work with Maccagnan.

One of the rumored sources of tension between the two was the Jets giving running back Le'Veon Bell a four-year, $52.5 million deal in free agency. According to some published reports, Gase didn't want Bell; others said Gase was not happy about paying that much money for the former Steelers star.

"The contract was what it was," Gase said. "I mean, everybody can criticize contracts all you want, but he's here, I'm excited he's here, I think our players are excited he's here and our coaches are. When you get a chance to coach a great player, a guy who has done things that no one has ever done in the league, like we're excited about that opportunity. I'm excited to get him in the offense, so I can start figuring out what else can we do with him. What hasn't he done? What can he be great at in this system?"

Gase also insisted he did not think the Jets overpaid for Bell, who has not attended the team's voluntary workouts this offseason. He is expected to re-join his new teammates for mandatory minicamp next week.

"Discussions are had and whether or not we disagreed on anything if it was financially, that's a completely different story than the person or the player," Gase said. "And that's where a lot of this gets misconstrued. Le'Veon Bell is a great player, he's a good person, he's been in constant contact with me. I enjoyed my interaction with him when he was here, when he came up to visit for his physical and we signed him, when he was here for the beginning of Phase I. He texts me all the time. All that stuff on Instagram, I get it first. That's how I know what he's doing. He's been great with me as far as contact goes, making sure that I know what he's doing, where he's working out at, where he is — whatever part of the United States he's working out in."

There was a recent report that the Jets could even consider trying to trade Bell to get out of the big contract.

Gase is serving as the acting general manager while the Jets begin the process of hiring a new one, with the coach characterizing it as being in the "beginning stages."

Johnson said last week that Gase will assist in the search, but Gase reiterated that it will be the owner's decision. Some have speculated that the incoming GM will likely have previous working ties with Gase, and the coach will have heavy influence on that new hire's decision making.

"I don't know," Gase said. "I don't really hang out with 'yes men,' so if it's somebody I already know, it's probably somebody that's not going to be a 'yes man.'"

Gase was also asked if he thinks he needs to establish a line of trust with the fans who might be wary about how things have unfolded with him during the past few weeks.

NOTES: First-round pick DL Quinnen Williams (calf) was not practicing for precautionary reasons. ... CB Trumaine Johnson was not present during the voluntary practice.