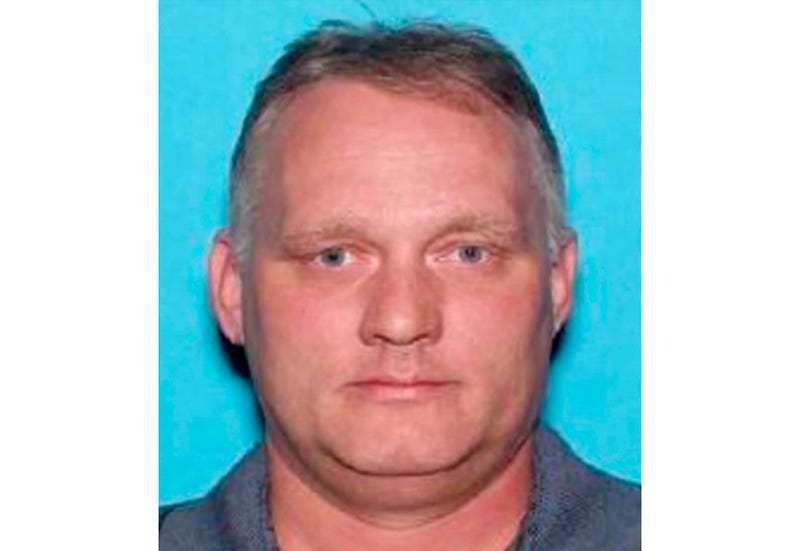 PITTSBURGH (AP) — The Latest on a deadly shooting at a Pittsburgh synagogue (all times local):

Funerals for all but one of the victims of the Pittsburgh synagogue massacre have been scheduled.

They run from Tuesday to Friday.

The first funeral service is for Jerry Rabinowitz and will be held Tuesday at 11 a.m.

A funeral is also set for Cecil Rosenthal and his younger brother, David, on Tuesday at noon.

Both come on the same day President Donald Trump and first lady Melania Trump will visit to "express the support of the American people and to grieve with the Pittsburgh community."

Only services for Irving Younger have not yet been announced.

The president of the hospital that treated the man accused in the Pittsburgh synagogue massacre says he was shouting "I want to kill all the Jews!"

Cohen says he stopped by Bowers' room to see how he was doing. He says he hopes to one day forgive Bowers the way relatives of victims killed in 2015 at the Emanuel AME Church forgave the shooter.

Cohen is also Jewish and a member of Tree of Life synagogue, where the shooting rampage happened Saturday. He said he lives near the synagogue and heard the shots from his home Saturday.

Bowers has been charged with deadly hate crimes. He appeared in court Monday.

This story has been corrected to show the hospital president's name is Jeffrey, not Jeffery and that his comments were made to Good Morning America, not WTAE-TV.

White House spokeswoman Sarah Huckabee Sanders said Monday that Trump will go "to express the support of the American people and to grieve with the Pittsburgh community."

There have been mixed responses to Trump's plan to visit.

Leaders of a liberal Jewish group in Pittsburgh penned an open letter to the president, saying he was not welcome until he denounced white nationalism.

Rabbi Jeffrey Myers with the Tree of Life synagogue made clear he would be welcome, telling NBC that "it would be my honor to always meet a president of the United States."

The man accused in the Pittsburgh synagogue massacre has appeared briefly in a federal courthouse in a wheelchair to face charges he killed 11 people in the attack.

Robert Bowers was wearing a blue sweatshirt in the Pittsburgh courtroom Monday. He was released from a hospital in the morning and turned over to federal authorities.

Bowers spoke with lawyers before the judge took the bench, going over documents and confirming his identity to the judge. He accepted a court-appointed defender.

Bowers was shot and wounded in a gun battle with police Saturday after what is believed to be the deadliest attack on Jews in U.S. history. Authorities say he expressed hatred toward Jews during the rampage Saturday and in later comments to police.

Attorney General Jeff Sessions says a massacre at a Pittsburgh synagogue was not just an attack on the Jewish faith, but "an attack on all people of faith."

Sessions called Saturday's shooting at the Tree of Life Synagogue "an attack on America's values of protecting those of faith." He says it "cannot and will not be tolerated."

Sessions' remarks came Monday during a discussion on the future of religious liberty hosted by the Boston chapter of the Federalist Society.

On Sunday, U.S. Attorney Scott Brady said he has begun the process to get Sessions' approval as required by law to pursue a capital case against Robert Bowers, who authorities say carried out what is believed to be the deadliest attack on Jews in U.S. history.

Sessions says people must be protected in houses of worship. He says the Justice Department will pursue the case with "vigor and integrity."

Democrats on the House Judiciary Committee are calling for congressional hearings on hate crimes and domestic terrorism in the wake of the killing of 13 people by individuals with white supremacist views.

Democrats said the nation has witnessed three acts of terror in the past week, including the murders of 11 Jewish people at a synagogue in Pittsburgh and two African-Americans at a supermarket in Jeffersontown, Kentucky. The Democrats also cited explosive devices sent to former President Barack Obama and other prominent figures.

New York Rep. Jerrold Nadler and other Democrats on the Judiciary panel said in a letter to the panel's Republican chairman that the committee is charged with assessing federal hate crimes statutes, protecting civil liberties and addressing gun violence, adding: "white supremacy ... must be stopped."

U.S. marshals say the Pittsburgh synagogue shooting suspect has arrived at a federal courthouse ahead of an afternoon appearance.

A government car with a wheelchair visible inside could be seen arriving Monday.

Robert Gregory Bowers traded gunfire with police during Saturday's massacre at the Tree of Life synagogue and was shot multiple times. He underwent surgery and survived.

Bowers is scheduled to appear before a U.S. magistrate judge in downtown Pittsburgh at 1:30 p.m. Authorities say he expressed hatred toward Jews during the rampage Saturday and in later comments to police.

A spokeswoman says the Pittsburgh synagogue shooting suspect has been released from the hospital.

Bowers traded gunfire with police during Saturday's massacre at the Tree of Life synagogue and was shot multiple times. He underwent surgery and survived.

Bowers is due in federal court Monday afternoon. Authorities say he expressed hatred toward Jews during the rampage and in later comments to police.

A social media site popular with far-right extremists and where the Pittsburgh synagogue shooting suspect had a profile has been taken down.

In an audio statement on Twitter, co-founder and CEO Andrew Torba called Saturday's shooting at the Tree of Life Synagogue that killed 11 an "act of terrorism." Torba says the site has a zero-tolerance policy for terrorism and violence.

Gab.com says it suspended the account of suspect Robert Gregory Bowers and contacted law enforcement immediately, turning over his account. The site says Bowers had accounts on other social media platforms.

Bowers is due in court on Monday.

Fundraising campaigns are quickly pulling together relief after the Pittsburgh synagogue shooting, including at least one organized by Muslim Americans.

A crowdfunding campaign called Muslims Unite for Pittsburgh Synagogue has raised more than $90,000 for survivors and families.

The activist who started the effort said when he saw the news, he thought "this could have very well been at a mosque or a Hindu temple."

Meanwhile, a graduate student in Washington, D.C., has increased his fundraising goal from $500 to $1 million.

Shay Khatiri's fundraiser had raised nearly $545,000 as of Monday morning. The Johns Hopkins School of Advanced International Studies student says the funds will go directly to the Tree of Life congregation.

Khatiri says he's a political refugee from Iran who has been a recipient of the Jewish community's generosity.

A rabbi who helped alert authorities to the synagogue shooting that killed 11 people says it was because of recent security training that he had a cellphone on him and was able to make the call.

Rabbi Jeffrey Myers of the Tree of Life in Pittsburgh said Monday on ABC's "Good Morning America" that he hadn't always carried a cellphone on the Sabbath.

But he says a security expert had told him in August that he was living in a new era and needed to carry it.

Myers says that he spent 20 minutes on the phone with authorities and that it "felt like an eternity."

Shooting suspect Robert Gregory Bowers is due in federal court Monday. Authorities say he expressed hatred toward Jews during the rampage Saturday and in later comments to police.

Survivors are recounting the terror of hiding in a dark closet during the massacre that killed 11 at a Pittsburgh synagogue and asking why the gunman blames them for the world's problems.

Suspect Robert Gregory Bowers is expected to appear in federal court Monday. Authorities say he expressed hatred toward Jews during the rampage Saturday morning and in later comments to police.

Barry Werber says members of the synagogue's New Light Congregation were in the basement and beginning to pray when they heard crashing coming from upstairs. They looked out and saw a body on the staircase.

Werber says he called 911 but was afraid to say anything for fear of making noise as gunshots echoed upstairs.