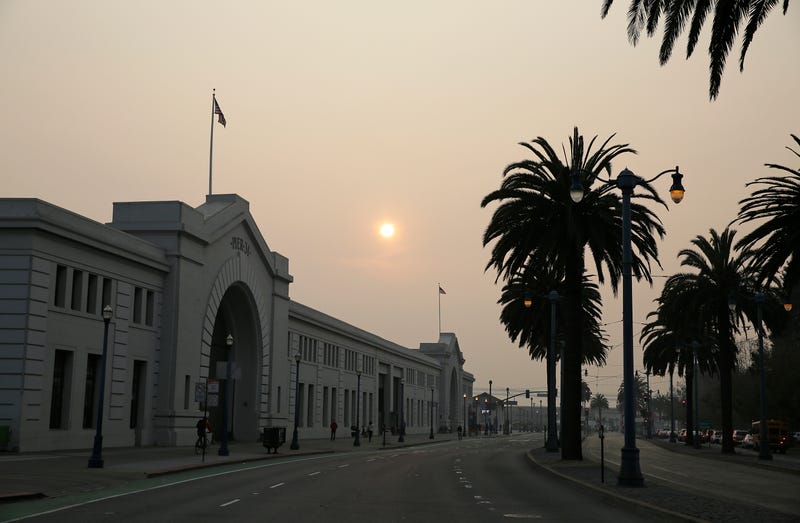 Photo credit Smoke and haze from wildfires obscures the Embarcadero Thursday, Nov. 15, 2018, in San Francisco. Recurring wildfires are sparking concern among medical experts about potentially major health consequences. Worsening asthma, lung disease and even heart attacks in heart disease patients have all been linked with previous fires. But blazes that used to be seasonal are happening nearly year-round and increasingly spreading into cities. That's exposing many more people to choking smoke that contains many of the same toxic ingredients as urban air pollution. (AP Photo/Eric Risberg)
By The Associated Press
November 16, 2018 11/16/2018 3:16 am

MAGALIA, Calif. (AP) — The Latest on wildfires in California (all times local):

Authorities say that 631 people are still unaccounted for after last week's deadly wildfire in Northern California.

Butte County Sheriff Kory Honea said he believes there are people on the list who fled the blaze and don't realize they were reported missing. He said authorities were making the list public so people could see if they're on it, and let authorities know they are safe.

Honea announced the increased count at a news conference Thursday, after having said a day earlier that 130 people were unaccounted for.

He said the first figure was a partial count, and after authorities went back through all 911 calls and other reports of missing persons from the past week they came up with the new number.

Authorities have reported seven more fatalities from a blaze in Northern California, bringing the total number of fatalities so far to 63 in the deadliest wildfire in state history.

The announcement came Thursday as authorities continued to search the devastated town of Paradise for human remains.

More than 5,000 fire personnel were battling the blaze that started a week ago and has displaced 52,000 people.

Authorities also raised the number of homes destroyed by the wildfire to 9,700.

San Francisco's iconic open-air cable cars have been pulled off the streets because of choking air wafting in from a wildfire in Northern California.

The city's transportation agency said Thursday that because of the poor air quality, "all cable cars will be pulling back into the cable car barn."

The San Francisco Municipal Transportation Agency made the announcement on Twitter, saying buses would provide service for the remainder of the day.

The deadly wildfire started a week ago in the Northern California town of Paradise that's about 180 miles (290 kilometers) north of San Francisco. It has sent smoke across the region.

Schools in San Francisco, Sacramento, Oakland and elsewhere have announced they will be closed Friday because of the poor air quality.

The University of Southern California and UCLA are canceling their usual bonfires before Saturday's football game at the Pasadena Rose Bowl out of respect for those who lost homes and lives in devastating California wildfires.

The rival teams announced Thursday that they'll forego the traditional fires at their pre-game spirit rallies.

Wildfires in Northern and Southern California have killed nearly 60 people and burned thousands of homes.

An informal camp for wildfire refugees in a Walmart parking lot in Northern California is going to be closing.

Volunteers who helped bring in free food and clothing said Thursday they are phasing out amenities.

More than 75 tents have popped up at the Chico store to house people evacuated from the fire that destroyed the town of Paradise and surrounding area.

Volunteers say they want people to go to shelters, so clothing, food and toilets will be removed by Sunday.

Betsy Totten, a Chico city spokeswoman, said it's unclear what will be done if people don't leave, but officials don't plan to kick them out.

The site has been popular with evacuees who can't find a hotel and can't stay at shelters because they have pets.

Most schools in San Francisco, Sacramento, Oakland and Folsom will be closed Friday as a deadly wildfire in Northern California send smoke into the Bay Area.

School districts announced the closures Thursday as the region experienced some of the worst air quality since the fire started a week ago about 180 miles (290 kilometers) north of San Francisco.

An Environmental Protection Agency website says the air quality in Sacramento is "hazardous" Thursday and San Francisco's is "very unhealthy." Many people walking around the cities wore face masks.

The wildfire that started a week ago has killed dozens of people and charred nearly 220 square miles (570 square kilometers).

A utility facing severe financial pressure amid speculation that its equipment may have sparked a deadly California wildfire asked U.S. energy regulators last month for permission to raise its customers' monthly bills.

Pacific Gas & Electric Co. told the Federal Energy Regulatory Commission in October that it wants the increase to harden its system against wildfires and deliver a sizable increase in profits to shareholders.

The company says it faces a higher wildfire risk than other utilities and would have trouble attracting investors without a higher profit.

The San Francisco-based utility made the request a month before the Camp Fire broke out Nov. 8 in Northern California and became the nation's deadliest wildfire in 100 years.

No cause has been determined, but PG&E reported an outage around when and where the fire ignited.

A man was shot and killed after a high-speed chase with a police officer in one of the evacuation zones of the deadly Northern California wildfire.

The Butte County Sheriff's Office said in a statement Thursday that the shooting happened at about 11 a.m.

Television stations KHSL/KNVN in the city of Chico reported that the shooting happened in an area near the town of Concow, which is in the zone where more than 50,000 people evacuated.

The sheriff's office says the shooting is under investigation but no other details were provided.

At least 56 people were killed in and nearby the town of Paradise, which was leveled by the fire. Concow is next to Paradise.

The Hollywood Foreign Press Association is giving $300,000 to help the victims of California's deadly wildfires.

The organization best known for creating and organizing the Golden Globe Awards on Thursday announced the donation to four organizations that also include money for victims and families of last week's mass shooting in Southern California.

The funds will go to the victims of the fires in Northern and Southern California. The fires started last week and together have killed at least 59 people, destroyed thousands of homes and prompted the evacuation of hundreds of thousands.

The association formed in 1943 and started the Golden Globes a year later.

It frequently hands out grants, usually to organizations related to the entertainment industry.

President Donald Trump will travel to California on Saturday to meet with victims of the deadly wildfires that have scorched the state.

The White House announced Thursday that it is still arranging details of his trip to California, but that visit people who have been impacted by the fires.

The fires in Northern and Southern California started last week and prompted the evacuation of hundreds of thousands of people and the destruction of thousands of homes.

At least 56 people were killed in and nearby the Northern California town of Paradise, which was leveled by the fire.

Two people were killed by the Southern California fire and a third death in that fire zone is under investigation as possibly linked to the fire.

Pacific Gas & Electric's stock price continues to get pummeled on Wall Street amid concerns about potential losses related to a devastating fire in Northern California.

The stock, which was on course Thursday for a six-day losing streak, was the biggest decliner in the S&P 500 index. It was down 29.5 percent to $18.04 in afternoon trading.

Investors are concerned over whether the power company can weather potential losses related to the blaze that devastated the town of Paradise, killing at least 56 people.

PG&E is facing a lawsuit claiming it is responsible for the blaze that started Nov. 8 and has charred nearly 200 square miles.

The company's stock price has plunged 60 percent since then, wiping out $15 billion of its market value.

Another utility, Edison International, is down about 30 percent in the same period as a separate wildfires burns in Southern California.

U.S. Interior Secretary Ryan Zinke is warning that Southern California mudslides are a risk in the vast area charred by a week-old wildfire in Los Angeles and Ventura counties.

Zinke says federal officials will work with state and local authorities to try to reduce the risk.

He spoke while touring the burn zone of the so called Woolsey Fire that prompted the evacuations of more than 200,000 people, including the entire seaside community of Malibu.

Zinke appeared with California Gov. Jerry Brown, who said he was told by President Donald Trump that the state will get federal support to handle costs associated with the fire.

Zinke also says officials will play close attention to toxic sites that burned to make sure hazardous materials don't get into the watershed.

The fire is 57 percent contained after scorching more than 153 square miles (396 square kilometers).

Classes have been canceled for tens of thousands Northern California university students as smoke from a deadly wildfire continues to drift south, choking the air in Sacramento and the San Francisco Bay Area.

Air quality officials said Thursday the region will experience some of the worst air quality in the eight days since the fire about 90 miles (130 kilometers) north of Sacramento started last week, destroying the town of Paradise.

The wildfire has charred nearly 220-square-mile (570-square-kilometer) since Nov. 8 and is 40 percent contained.

Officials from six Northern California universities say classes are canceled Thursday. Some of the colleges are closing all of their buildings. Cal Estate East Bay says its libraries, health centers and dining halls will remain open.

Bay Area Air District executive officer Jack Broadbent says in a statement that smoke from the fire continues to blanket all nine counties in the San Francisco Bay Area.

Southern California firefighters are battling a new wildfire but there is much less wind than the region experienced over the past week.

The fire burning Thursday near the Ventura County city of Santa Paula is northwest of the huge area scorched by the so-called Woolsey Fire that started last week.

The new blaze is estimated at between 75 and 100 acres (30 and 40 hectares). Although winds are greatly reduced, conditions remain very dry.

In the Woolsey Fire area that affected many suburbs of Los Angeles, some evacuation orders remain in effect but many areas have been repopulated.

The fire area is now measured at more than 153 square miles (396 square kilometers) and estimates of destroyed structures top 500.

Authorities continue to investigate a body found Wednesday in a completely burned home. Two other people were found dead in a burned-out car earlier during the fire.

A firefighter assigned to the Woolsey Fire was struck by a private vehicle early Thursday and hospitalized with injuries that are not life-threatening.

Cool weather is helping fire crews increase their containment of the Northern California deadly blaze that razed a town and killed at least 56 people.

The California Department of Forestry and Fire Protection said Thursday the wildfire that destroyed the town of Paradise is now 40 percent contained, up from 30 percent Wednesday morning.

The blaze has charred nearly 220 square miles (570 square kilometers) since it started Nov. 8 in hills east of Paradise, swept through the town and neighboring communities.

More than 450 people had now been assigned to comb through charred debris in the search for human remains.

Many of the missing in the deadly Northern California wildfire are elderly residents in Magalia, a forested town of about 11,000 north of the destroyed town of Paradise.

More than 450 people have been assigned to comb through charred remains in search of the 130 people who are still unaccounted for.

Already, at least 56 people have been confirmed dead.

A week after the fire struck, police teams drive around Magalia searching for those still in their homes, checking if they need any food and water.

With the death toll at 56, it is the deadliest wildfire in a century. There were also three fatalities from separate blazes in Southern California.