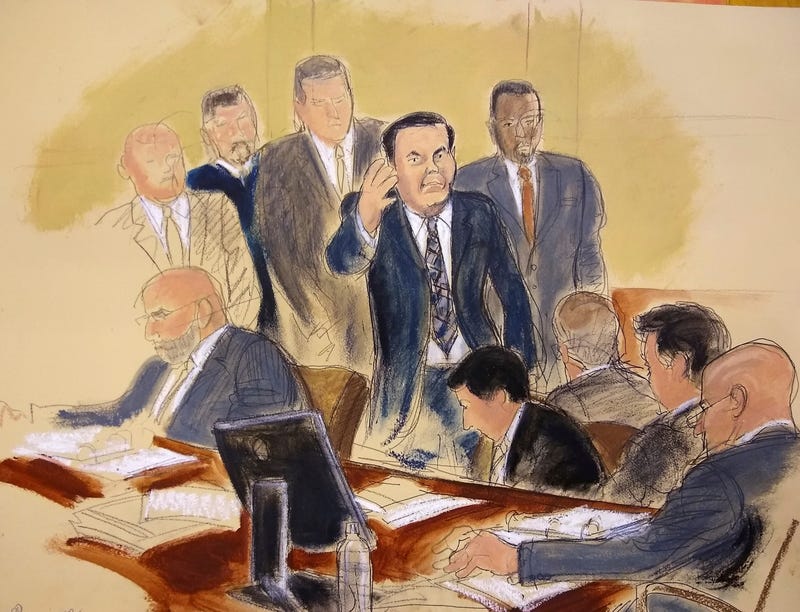 Photo credit Joaquin "El Chapo" Guzman, surrounded by US Marshals, waves to his wife as he enters the courtroom at Brooklyn Federal Court, as his high-security trial got underway in the Brooklyn borough of New York, Tuesday, Nov. 13, 2018. The infamous Mexican drug lord has been held in solitary confinement since his extradition to the United States early last year. Guzman pleaded not guilty to charges that he amassed a multi-billion-dollar fortune smuggling tons of cocaine and other drugs in a vast supply chain that reached New York, New Jersey, Texas and elsewhere north of the border. (Elizabeth Williams via AP)
The Associated Press
November 14, 2018 11/14/2018 12:09 am

NEW YORK (AP) — The latest from the New York trial of the Mexican drug lord known as "El Chapo" (all times local):

A lawyer for Mexican smuggler Joaquin "El Chapo" Guzman told a jury in New York Tuesday his client was not the real leader of a cartel that sent tons of cocaine into the U.S.

Lichtman told the jury Zambada evaded capture by paying millions of dollars in bribes to the current and former presidents of Mexico.

Guzman's trial is expected to last into next year.

A lawyer for the Mexican drug lord known as "El Chapo" says his client wasn't running a violent cartel and should be acquitted at his U.S. trial.

Defense attorney Jeffrey Lichtman said in his opening statement to a jury in New York on Tuesday it would have been impossible for Joaquin Guzman (wah-KEEN' gooz-MAHN') to be in charge of the vast drug-dealing organization since he was either in jail or in hiding the entire time of the alleged conspiracy.

The lawyer says the real boss was another kingpin who has paid bribes to corrupt government officials in Mexico to keep his freedom.

Lichtman is set to resume his opening statement Wednesday.

Guzman was extradited to the U.S. after breaking out of prison in Mexico twice.

Opening statements have begun in the New York City trial of a Mexican drug lord known as "El Chapo."

Fels says they'll see his text messages as he carried out a ruthless drug trafficking organization that funneled hundreds of tons of cocaine to the U.S.

The prosecutor described how Guzman started modestly in the early 1970s by selling marijuana in Mexico, but built his reputation by building tunnels across the Mexico-U.S. border to transport drugs.

His lawyers say he's being framed by cooperators.

A lawyer for the Mexican drug lord known as "El Chapo" says he's ready to defend his client and has nothing to prove.

Eduardo Balarezo spoke to journalists on Tuesday while entering the highly secured Brooklyn federal courthouse where Joaquin Guzman (wah-KEEN' gooz-MAHN') is being tried.

One of the jurors was excused shortly before opening statements were set to begin. The reason was unclear.

The lawyers and judge have been working to select a replacement. It's not known how long that will take.

Opening statements in the U.S. trial of Mexican drug lord known as "El Chapo" have been delayed because of a problem seating a full jury.

One of the jurors selected for the New York City trial of Joaquin Guzman (wah-KEEN' gooz-MAHN') was excused shortly before the trial was set to open on Tuesday.

The reason was unclear.

The lawyers and judge were working to select a replacement from a pool of potential jurors who had previously been considered for the trial but hadn't made the final cut.

It wasn't known how long it would take to get the alternate on the jury so both sides could make their opening statements.

The notorious Mexican drug lord known as "El Chapo" is being tried in New York City amid intense security measures.

The wife of defendant Joaquin Guzman (wah-KEEN' gooz-MAHN') entered a Brooklyn courthouse on Tuesday to watch opening statements at his trial.

The defendant's history of violence has prompted patrols by heavily armed officers outside the Brooklyn courthouse.

The jury is anonymous.

Guzman also has been held in solitary confinement and barred from seeing his wife out of concerns he could pass messages to his cohorts.

The evidence will include the testimony of more than a dozen cooperating witnesses who prosecutors say are risking retribution. There also will be evidence about multiple murders committed in drug wars in Mexico, cocaine smuggling and Guzman's brazen escapes from jail.

His lawyers say he's being framed by cooperators.

A U.S. jury is set to hear an epic tale about the notorious Mexican drug lord known as "El Chapo."

Opening statements at the trial of Joaquin Guzman are to begin Tuesday morning in a New York City courtroom under tight security.

The evidence will include the testimony of more than a dozen cooperating witnesses who prosecutors say are risking retribution by taking the stand. There also will be evidence about multiple murders committed in drug wars in Mexico, about cocaine smuggled in jalapenos cans and Guzman's brazen escapes from jail.

His arrest and extradition to New York City shook up Mexico's drug underworld and remains a big story there.

He could face life in prison if convicted of drug-trafficking charges. His lawyers say he's being framed by the cooperators.