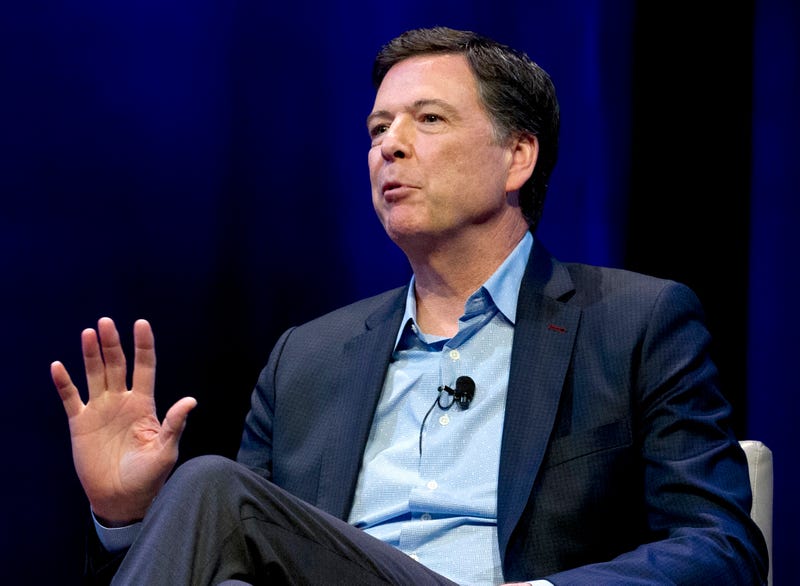 Photo credit FILE - In this April 30, 2018, file photo, former FBI director James Comey speaks during a stop on his book tour in Washington. Comey has challenged in court a subpoena from the House of Representatives. Lawyers for Comey argued in a court filing on Nov. 29, 2018, that he shouldn’t have to appear for a closed-door interview with lawmakers next week. (AP Photo/Jose Luis Magana, File)
The Associated Press
December 1, 2018 12/01/2018 3:11 am

WASHINGTON (AP) — James Comey's lawyer urged a judge Friday to block a subpoena requiring that the former FBI director submit to a private interview before a House panel, arguing that Republican lawmakers want to take shots in a "dark alley."

But a lawyer for Congress said committees are free to conduct investigations as they please and that Comey, who is concerned that statements from a closed-door interview would be selectively leaked, had no right to refuse a subpoena and demand a public hearing.

"No federal district court judge in the history of the republic has granted the type of relief that Mr. Comey seeks," said Thomas Hungar, general counsel for the House of Representatives.

U.S. District Judge Trevor McFadden, an appointee of President Donald Trump, did not immediately rule but said he expected to make a decision Monday. He questioned both sides but appeared skeptical at time of Comey's arguments and suggested that Comey could simply respond to leaks he didn't like by making disclosures of his own.

The Republican-led House Judiciary Committee sent Comey a subpoena seeking a private interview to discuss FBI actions in 2016. That was when the bureau declined to recommend charges against Democrat Hillary Clinton for her use of a private email server and opened an investigation into potential coordination between Russia and the Trump campaign.

Trump fired Comey in May 2017, less than four years into his tenure.

Comey, who has testified publicly on Capitol Hill about both the Clinton and Russia investigations, balked at the subpoena because he said committees were prone to selectively reveal information for political purposes. He was subpoenaed to appear next week.

By insisting that the interview must be done behind closed doors because of the sensitive information at stake, Kelley added, lawmakers are using the subpoena as "both a sword and a shield" so that they can take "shots at the guy in a dark alley" and "let people see what we want them to see."

"They just want to zero in and gang up and do it in a non-public way," he said.

Hungar rejected the idea that improper leaks were tainting the investigation, and in a court filing Friday, described Comey's request as "extraordinary and frivolous."

"Try as he might, Mr. Comey may not condition his cooperation with a congressional investigation on the presence of television cameras," Hungar wrote. "No other witness involved in this investigation has made such a grandiose demand, and this Court should not countenance Mr. Comey's temerity in attempting to dictate the terms on which he will deign to comply with his constitutional obligations."

He said there was no blanket prohibition against committee members or their staffs from disclosing what takes place in closed-door interviews and that there was similarly nothing to stop Comey — if he doesn't like something that was said — from publicly sharing details about his congressional appearance.

"Mr. Comey has an ample opportunity to express his views," Hungar said.