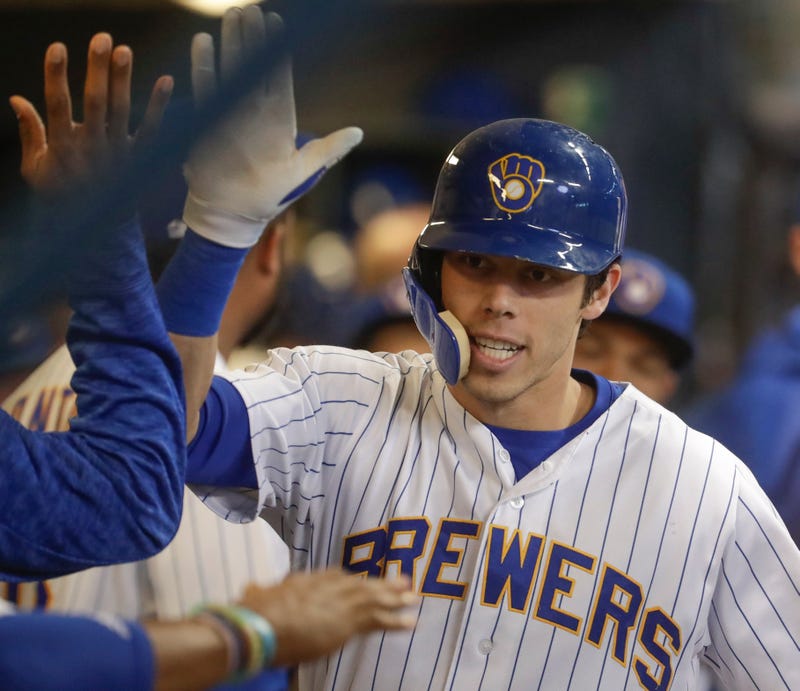 His eye is so good at the plate that the Milwaukee Brewers star is leading the National League in hitting.

Now his younger brother Cameron has been discharged from the Marines, just in time to catch Christian and the Brewers make a final push for the NL Central title.

The Brewers' 6-5 win over the Detroit Tigers on Friday night was the first time Cameron had seen his brother play in about two years. The whole family stayed with Christian in Milwaukee.

"There's a lot of extra room at my place so there's plenty of room for everybody and we should be able to make it work," Christian said before the game.

Cameron even got to throw out a ceremonial first pitch to Christian.

The pitch from the right-handed Cameron Yelich was a little low and outside, but it was an otherwise respectable toss for someone who didn't really play baseball.

"Whenever he's got a good game, I'll text him like 'nice shot dude, blah, blah, blah,'" Cameron said with a laugh.

"It was a surprise. He didn't know he was doing it until an hour or two before so he was a little nervous, but I think he did a great job," he said.

Christian, 26, is the oldest of three brothers. Collin, 24, was also at the game, along with the 22-year-old Cameron.

"It's exciting. It's also emotional to have everybody together for the first time in a really long time," mother Alicia Yelich said as Cameron waited outside the Brewers clubhouse before throwing the first pitch.

A lot has changed since all three brothers were in the ballpark at the same time.

Christian Yelich was already a pretty good player in 2016, when he hit .298 with 21 homers and 98 RBIs for the Marlins. The Brewers acquired him from Miami in a trade this past January for four prospects.

He has developed an MVP-caliber resume in Milwaukee.

Yelich, hitting .322 entering Saturday, is in position to become the first batting champion in franchise history. He was also in the top 10 in the NL in slugging, runs, RBIs and homers.

"But I think there's no doubt now he is one of the 10 best players in baseball," Brewers owner Mark Attanasio said. "So it's really nice to see him mature."

Christian Yelich showers similar appreciation on his brother, who was in the infantry after enlisting in the Marines. Stationed in Hawaii, Cameron had two noncombat deployments to Japan.

Cameron would follow Brewers games on social media. Sometimes he'd watch on his phone, though he often would have to sleep outside in a field without cellphone service as an assignment during deployments.

"I've always just taken great pride in my country," Cameron said when asked why he enlisted. "I think it's a very honorable thing to do,"

Christian described his brother as "selfless" for serving four years in the Marines.

"I think he gained a lot from the experience, and we're all thankful for everybody that serves this country," he said. "To get a greater understanding of what military families go through and the schedule was probably the most eye-opening thing, and I'm glad he's back."

He marked the occasion by hitting a two-run homer in the bottom of the first inning. When he returned to right field in the top of the second, he was greeted by fans yelling, "MVP! MVP!"