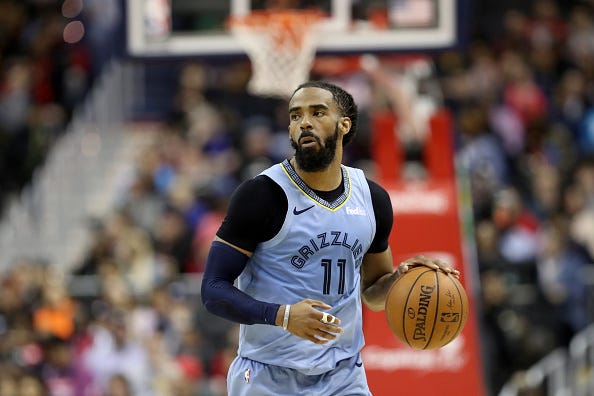 The Memphis Grizzlies traded away the final piece of the franchise’s best years on Wednesday, sending veteran point guard Mike Conley to the Utah Jazz for a trio of players, a person familiar with the deal told The Associated Press.

The Grizzlies swapped Conley for Jae Crowder, Kyle Korver and Grayson Allen. Neither Memphis nor Utah has announced the trade, but Conley confirmed it on Twitter thanking Memphis and expressing optimism about joining the Jazz.

What more can I say about my city! You guys made me the man I am today! Memphis is home. Always! 🙌🏾🙌🏾..Time for another chapter! Excited to give all I have to The Jazz and Salt Lake City! 😁#LetsGetIt #GodsPlan #takenote 💪🏾

ESPN.com first reported the deal, which it says also includes Utah's No. 23 pick overall in Thursday night's draft. The Grizzlies still hold the No. 2 overall pick in the draft.

Conley, 31, was the final piece of the core that led the Grizzlies to seven consecutive playoff berths, including the 2013 Western Conference Finals. Zach Randolph and Tony Allen left in 2017 as free agents, and Memphis traded Marc Gasol to Toronto in February, splitting up a duo that had been the NBA's longest-tenured teammates. Gasol went on to help the Raptors win their first NBA title.

The trade cannot be completed until the new league year starts on July 6.

The move almost certainly means that Ricky Rubio will be elsewhere next season, even after he averaged 12.7 points and 6.1 assists for the Jazz this season. Pairing Conley with rising star Donovan Mitchell figures to give the Jazz one of the best backcourts in the league next season and would seem to bolster Utah’s chances in a rapidly changing Western Conference.

The move also could make Memphis a major player in free agency for 2020, although much of that space hinges on what the team does to fill out a roster this summer.

It’s the second major trade in the West since the NBA Finals ended last week, the first being the move sending Anthony Davis from New Orleans to LeBron James and the Los Angeles Lakers. And the five-time defending Western Conference champion Golden State Warriors won’t have Klay Thompson or Kevin Durant for much, if not all, of next season because of injuries — and it remains a possibility that both of those players will sign elsewhere this summer as well.

The Grizzlies tried to trade Conley before the deadline but couldn’t with the guard’s pricey contract complicating deals. Conley signed a max contract in July 2016 with $67 million more due over the next two seasons.

He leaves with a handful of franchise records, including most games played (788) over his 12 seasons in Memphis. Conley, who turns 32 on Oct. 11, played only 12 games in 2017-18 because of a painful left heel that needed season-ending surgery. But Conley returned this last season to play 70 games and scored a career-best 21.1 points per game. He was just off his career highs with 6.4 assists per game and averaged 1.3 steals per game.