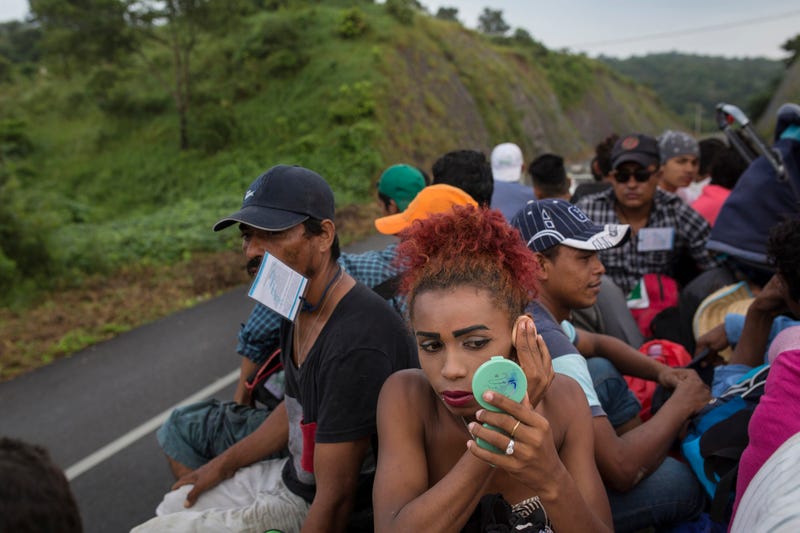 Photo credit In this Nov. 2, 2018 photo, Honduran transgender Alexa Amaya, who part of a group of 50 or so LGBTQ migrants traveling with the migrant caravan hoping to reach the U.S. border, uses a compact to apply makeup while riding in the back of a flatbed truck to Sayula, Mexico. "I know it will be difficult to win asylum," said Alexa, a 24-year-old from Copan Honduras, "but we have to make the attempt." (AP Photo/Rodrigo Abd)
The Associated Press
November 13, 2018 11/13/2018 5:03 am

MATIAS ROMERO, Mexico (AP) — Dozens of transgender women and gay men in the caravan moving through Mexico with hopes of seeking asylum in the United States have banded together for protection — not from the uncertainty of a journey fraught with danger from the gangs who prey on migrants but from their fellow travelers.

Fleeing violence and discrimination back home because of their gender identity or sexual orientation, these LGBTQ migrants have found the journey north to be just as threatening amid catcalls and even physical abuse.

"Sweet little thing!" ''Baby, where you going?" ''How much do you charge?" These all-too-familiar jeers are spewed at them as they make their way with the caravan of several thousand.

Loly Mendez, a 28-year-old who began transitioning to a woman in her native El Salvador, knows all too well the dangers her fellow transgender migrants faced back home: Her best friend, also a transgender woman, was murdered for doing the same.

Then Loly herself began getting threats — "that if my breasts were going to grow, they would cut them off," she said. They were always anonymously delivered, which only made her more fearful and finally drove her to flee.

"In my country there is violence, a lack of work and opportunities," said Loly, who like many of the transgender women in the group preferred using only her first name. "In the caravan there is also violence — against the LGBTQ community."

Loly linked up with the caravan in Tapachula, in southern Mexico, and hopes to work in the United States and save up to start a beauty products company — perhaps in Los Angeles or New York. It's something she has planned for a long time, all the way down to the business' logo, but she's never had the money.

"I am going to a country where I know I will achieve my dreams," Loly said, hopefully.

Reports are common in much of Central America of LGBTQ people being murdered, assaulted and discriminated against, due to their gender identity or sexual orientation.

But getting U.S. asylum is difficult even with proof someone has been the victim of persecution for being transgender, said Lynly Egyes, director of litigation at the Transgender Law Center in Oakland, California.

It often takes days or weeks for transgender immigrants to get a hearing before an asylum officer. If they are allowed to move forward in the process, many are traumatized and struggle to tell their story, Egyes said. They are also much less likely to be granted asylum without a lawyer.

"It is a horrifying process, and not everybody makes it through," she said.

Many of the migrants have said they joined the caravan because it offered safety in numbers. The 50 or so LGBTQ migrants traveling together, most of them in their 20s but some as young as 17 or as old as 60, say they, too, banded together for safety — a sort of caravan within the caravan.

Sticking out in their bright-colored clothing and makeup, the group has suffered verbal harassment, especially from men, and has been the victim of robbery and other aggressions. One recent day as they walked in a row on the highway to Isla, in the Mexican Gulf coast state of Veracruz, a group of fellow migrants passed by on a flatbed truck and showered them with water, oranges, rinds and other refuse.

Fearful of being attacked more violently or sexually assaulted, they stick by each other's sides 24 hours a day, walking and sleeping in a group and even using the buddy system for going to the bathroom.

In Matias Romero, in the southern Mexican state of Oaxaca, rather than sleep outdoors they took over an abandoned hotel damaged in last year's deadly earthquake. Dirty, windowless and with no electricity or running water, it was nonetheless a place to have a roof over their heads and be safe. They bathed by the light of a small lantern, dressed themselves and applied makeup as dozens of men milled about outside.

Each night "the girls," as they call themselves, sift through piles of donated clothing to try to look as sharp as possible. And they face a dilemma: Where to dress and relieve themselves?

"We have problems when it comes time to go to the bathroom," said Nakai Flotte, a transgender woman and activist. "We bathe in the men's, sometimes in the women's, but it's difficult. There isn't one for us."

Flotte was accompanying the migrants to provide support and information about making asylum claims.

The U.S. "should take into account their condition of vulnerability and violence," she said.

However, a decision by then Attorney General Jeff Sessions this year to deny asylum to victims of domestic and gang violence could also have a negative impact on transgender women and men because many are victims of gang violence who are targeted for being transgender.

"I know it will be difficult to win asylum," said Alexa Amaya, a 24-year-old from Honduras, "but we have to make the attempt."

The caravan has traveled more than 1,000 miles (more than 2,000 kilometers) in the month since its initial participants set out from San Pedro Sula, Honduras, and as it traverses Mexico's central highlands it's still about the same distance from its goal of Tijuana, across the border from San Diego. It's unclear how many will make it. A similar caravan earlier this year fizzled to just about 200 who reached the U.S. frontier.

Much of the trek has been on foot, but hitching rides in pickup trucks, minibuses and tractor-trailers has been crucial lately, especially on days when they travel 100 miles or more. For the LGBTQ group, it's been tougher to find those rides.

"A taxi driver kicked us out of his car," said Lady Perez, a 23-year-old from Honduras, adding that sometimes truck drivers who often transport migrants for a small fee have doubled or tripled the price for her group.

Lady began identifying as transgender at age 5, and her father ultimately disowned her. She was subjected to insults and beatings, her boyfriend was killed and she was warned to leave Honduras or else.

"In our country the rights of the LGBTQ community are not respected, and anti-social groups take advantage of that," Lady said.

Walking on the highway in a black miniskirt, red lipstick and black eyeliner, she said many men in the caravan have been harassing her and the others.

"They have denigrated us. Supposedly you're emigrating from your country because of the violence, the discrimination, the homophobia, and it turns out that in the very caravan you face this kind of violence," she said.

In the face of the near-constant harassment, march organizers and human rights workers have sought to provide the group some security in the form of two men in green vests who travel with them and try to ward off any attacks.