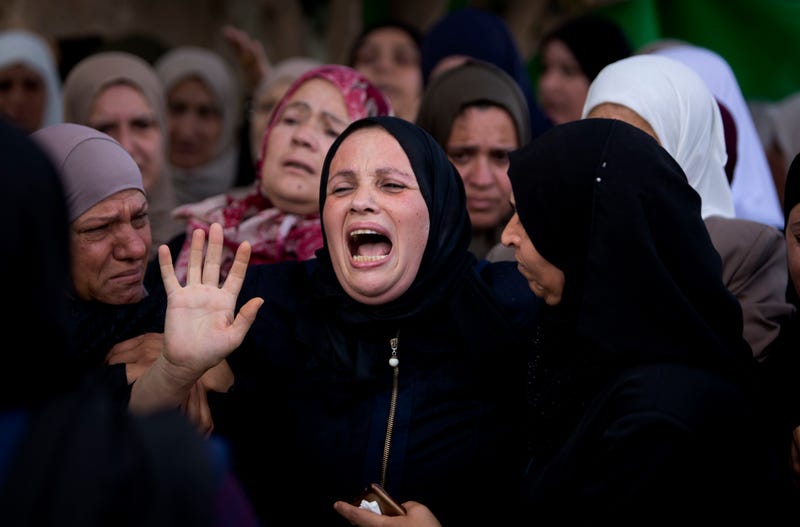 Photo credit Relatives of Aisha Rabi, 48, mourn at the family home during her funeral in the West Bank village of Biddya, Saturday, Oct. 13, 2018. Rabi has been killed after being struck in the head by a stone thrown by Israeli settlers, Palestinians said. (AP Photo/Majdi Mohammed)
By The Associated Press
October 13, 2018 10/13/2018 5:30 pm

BIDYA, West Bank (AP) — Palestinians on Saturday buried eight of their dead — a woman killed when a stone hit her in the head while riding in a car in the West Bank, an attack blamed on Jewish settlers, and seven who were shot by Israeli troops during protests in Gaza the previous day.

It was the latest aftermath of another day of violence in the coastal strip. The Israeli military said 14,000 Palestinians had thronged the border fence areas, burning tires and throwing rocks, firebombs and grenades at soldiers stationed atop earth mounds on the other side of the barrier.

The 48-year-old Palestinian woman and mother of eight, Aisha Rabi, was traveling with her husband and two daughters to their home in the village of Bidya in the northern West Bank when she was struck in the head by a stone early on Saturday.

Her cousin, Isam Rabi, said the family's car was pelted with stones. Aisha was rushed to a hospital where she was pronounced dead. Her husband saw a group of settlers nearby, Rabi said.

Israel said it was investigating the incident and imposed a gag order on the process.

The area is near several ultranationalist Jewish settlements. Last Sunday, a Palestinian assailant killed two Israelis in a nearby settlement. And on Thursday, a Palestinian man stabbed and wounded an Israeli soldier there, raising the possibility of a revenge attack.

Thousands of relatives and neighbors attended Aisha's funeral later Saturday. Her body was wrapped in a Palestinian flag as grievers carried the coffin to the cemetery.

"With our blood and our spirit we will redeem the martyr," shouted the angry mourners. Aisha's brother, Ibrahim Bolad, said there was no doubt, "settlers threw stones at the car."

The Islamic militant group Hamas, which rules the Gaza Strip, condemned her death.

In Gaza, funerals were held for seven Palestinians shot dead by Israeli troops during Friday's weekly protest. Ismail Haniyeh, Hamas' political leader, attended one of the funerals, pledging to keep up the protests until a decade-long Israeli-Egyptian blockade is lifted.

Since March, Hamas has orchestrated near-weekly protests along the security fence dividing Gaza and Israel, pressing for an end to a stifling Israel-Egyptian blockade imposed since the militant group wrested control of Gaza in 2007.

Israeli fire has killed 155 Palestinians since the protests began. An Israeli soldier was killed over the same period.

Of the seven killed on Friday, four died in one location, where the Israeli military said it opened fire on a crowd of Palestinians who had breached the fence and approached an army post. One Palestinian was initially wounded and died later in hospital. No Israeli troops were harmed, the army added.

The army said several Gazans tried to infiltrate into Israel again on Saturday through the fence but returned after being warned by the military. One unarmed Palestinian was arrested and taken in for questioning.

In May, about 60 protesters were killed in a single day, making it one of the deadliest since a 2014 war between the two sides.

The blockade has restricted Hamas' ability to govern and plagued most of Gaza's 2 million residents. Electricity is supplied for roughly four hours a day, unemployment stands at more than 50 percent and tap water is unpotable.

Repeated attempts to reconcile Hamas and the West Bank-based administration of Palestinian President Mahmoud Abbas have all but faltered, increasing the desperation that has in large part fueled the demonstrations.

Hamas seeks a cease-fire with Israel securing an easing of the blockade but accuses its rivals in the West Bank of thwarting the effort. In recent weeks, it has stepped up its campaign, holding nighttime protests and adding new locations, such as along the beach. Hamas says the escalation of protests is a response to the unresolved cease-fire talks.