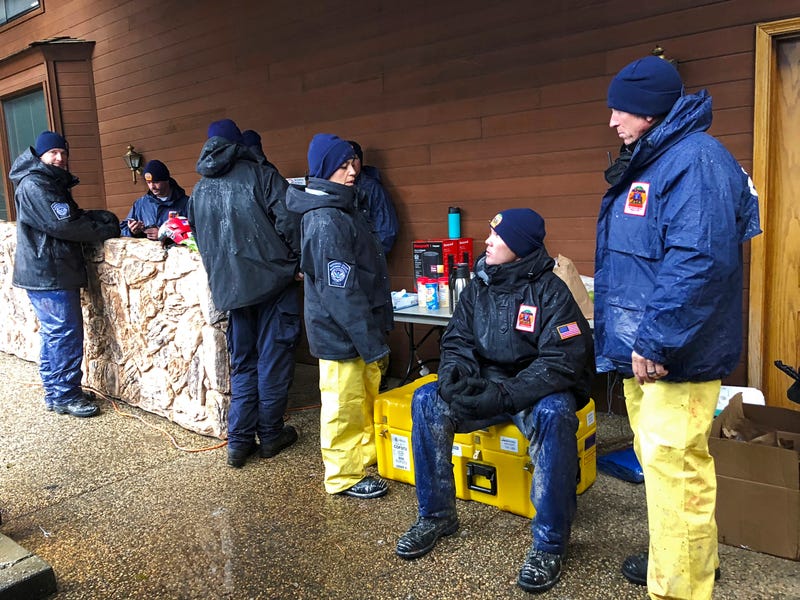 Photo credit CORRECTS NAME TO CHRIS STEVENS INSTEAD OF CRAIG STEVENS - National Urban Search & Rescue Response System Orange County CATF-5 team members Imelda Cordova, third from right, talks to Andrew Ricker and Chris Stevens, far right, as their team takes cover from the rain in Paradise, Calif., Friday, Nov. 23, 2018. High winds and heavy rains are temporarily halting the work of some search teams out looking for remains of people caught up in the deadly wildfire. The Camp Fire, which destroyed the historical mining town of Paradise, is the most deadly in state history, with 84 fatalities as of Friday, according to statistics from the California Department of Forestry and Fire Protection. It's also the deadliest in the U.S. in a century. (AP Photo/Kathleen Ronayne)
The Associated Press
November 24, 2018 11/24/2018 3:35 am

PARADISE, Calif. (AP) — Rain helped extinguish a deadly wildfire in Northern California's Gold Rush country, but the moisture also turned ash into thick paste and hindered the hunt for telltale fragments of bone that could indicate a body.

Searchers resumed their grim task Friday afternoon after a downpour eased up in Paradise, California. They fanned out across the ruins of a mobile home park shrouded in heavy fog, some combing debris with rakes while others lifted up twisted metal to peer underneath or led dogs through the ash.

This particular park had already been searched by humans and dogs, as evidenced by orange spray-paint markings left by search teams to indicate they have canvassed an area. But Craig Covey, who leads a search team from Southern California's Orange County, said they were searching it again because it was the last known address of people who remained missing, many of them elderly.

The searchers wore yellow rain slickers and hard hats to protect against falling branches as they quietly looked for clues that may indicate someone couldn't get out, such as a car in the driveway or a wheelchair ramp. They looked not only for bone, but anything that could be a pile of cremated ashes.

The nation's deadliest wildfire in the past century has killed at least 84 people, and more than 560 are still unaccounted for. Despite the inclement weather, more than 800 volunteers searched for remains on Thanksgiving and again Friday, two weeks after flames swept through the Sierra Nevada foothills, authorities said.

Prior to searching the mobile home park, Covey's team of about 30 worked for several hours Friday morning before stopping and returning to a staging area with hot coffee, food and a small electric heater for warmth. Covey decided the heavy winds and rain had made the conditions too dangerous to keep searching.

Just as the rain saturated the ground, it added weight to towering pine trees that threatened to topple over, known by firefighters as "widow makers." It was Brian Abney's job to watch in case one fell.

"If you start hearing cracking, you better start looking up," he said.

While the rain made everybody colder and wetter, they kept the mission in mind, said Chris Stevens, who wore five layers of clothing to keep warm.

"It doesn't change the spirits of the guys working," he said. "Everyone here is super committed to helping the folks here."

While rain complicated the search, it also helped nearly extinguish the blaze, said Josh Bischof, operations chief for the California Department of Forestry and Fire Protection.

Once the rain clears, state officials will be able to determine if the blaze is fully out, he said.

The Camp Fire ignited Nov. 8 and has destroyed nearly 19,000 buildings, most of them homes. That's more than the worst eight fires in California's history combined, the agency said, with thousands of people displaced.

The volunteers interrupted by rain Friday found other ways to help.

Covey and several team members took two big brown bags full of lunch to 64-year-old Stewart Nugent, who stayed in his home and fought off flames with a garden house, a sprinkler and a shovel. He has been there for two weeks with his cat, Larry.

The first winter storm to hit California has dropped 2 to 4 inches of rain over the burn area since it began Wednesday, said Craig Shoemaker with the National Weather Service in Sacramento.

The weather service issued a warning for possible flash flooding and debris flows from areas scarred by major fires in Northern California, including the areas burned in Paradise.

Shoemaker said Friday afternoon that about a quarter-inch of rain was falling per hour, not enough to cause serious problems. An inch of rain per hour would be more difficult, he said.

The rain was expected to subside by midnight, followed by light showers Saturday, he said.

In Southern California, more residents were allowed to return to areas that were evacuated because of the 151-square-mile (391-square-kilometer) Woolsey Fire as crews worked to repair power, telephone and gas utilities.

About 1,100 residents were still under evacuation orders in Malibu and unincorporated areas of Los Angeles County, down from 250,000 at the height of the fire.

The fire erupted just west of Los Angeles amid strong winds on Nov. 8 and burned through suburban communities and wilderness parklands to the ocean, leaving vast areas of blackened earth and many homes in ashes. Officials say three people were found dead and 1,643 structures, most of them homes, were destroyed.

In Northern California, the workers on the ground tried to keep their minds on the task at hand rather than the tragedy of the situation.

"The guys will never say it's hard," said David Kang, a member of the search team from Orange County. "But it is."