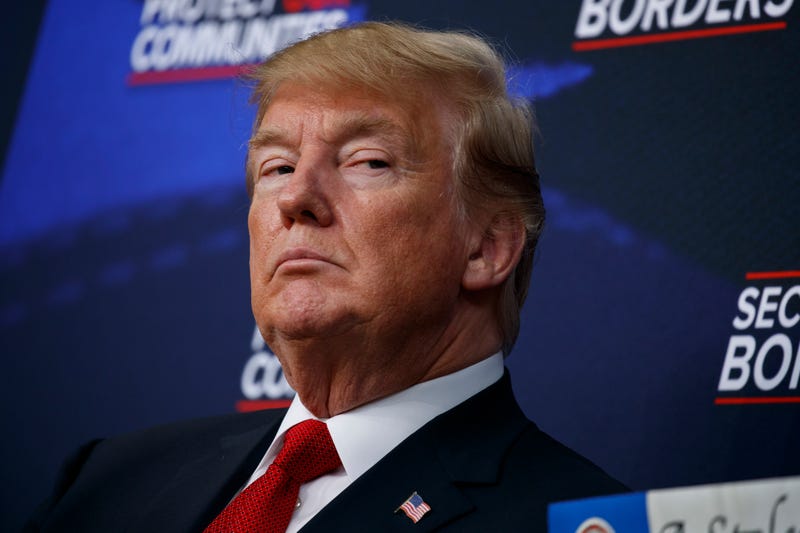 Photo credit FILE - In this June 22, 2018 file photo, President Donald Trump listens during an event on immigration alongside family members affected by crime committed by undocumented immigrants, at the South Court Auditorium on the White House complex in Washington. Federal immigration and health officials were blindsided by President Donald Trump’s “zero tolerance” policy on migrants crossing the southwest border, triggering a cascade of problems as agencies struggled with the fallout from family separations, congressional investigators said in a critical report issued Wednesday. (AP Photo/Evan Vucci)
By The Associated Press
October 24, 2018 10/24/2018 12:08 pm

The investigation by the nonpartisan Government Accountability Office dissects the consequences of launching a major policy change without consulting with the agencies that have to carry it out. The report makes no recommendations as it reconstructs a turbulent episode for the Trump administration.

With the White House considering tougher immigration measures as a caravan of migrants slowly heads north from Central America, the GAO report stands as a cautionary tale.

"Officials told us that the agencies did not take specific planning steps because they did not have advance notice," the GAO found. "Officials we interviewed stated that they became aware of the April 2018 ('zero-tolerance') memo when it was announced publicly."

On April 6, Trump issued an executive order directing an end to "catch and release" at the border, a practice whereby migrants could be admitted into the country temporarily while their immigration claims were pending. That day, Attorney General Jeff Sessions ordered federal prosecutors to adopt a "zero tolerance policy" for border crossers. Parents placed into criminal custody could not keep their children with them, so families were split.

The report focuses on Homeland Security agencies such as Immigration and Customs Enforcement and the Border Patrol, part of U.S. Customs and Border Protection, along with the Health and Human Services Office of Refugee Resettlement, or ORR, which traditionally has had responsibility for providing shelter for unaccompanied minors detained at the border.

The HHS agency had a far different task this time because the children were deemed "unaccompanied minors" after the government had separated them from their parents. Previously the refugee office was used to dealing with minors who arrived at the border alone. There was another important difference: Many children who were separated from their parents were considerably younger than the teens and pre-teens ORR normally attended to.

"Shelters converted space previously used for classrooms for older children to be space for children under age 5, with one shelter adding cribs, smaller tables and chairs, and toys appropriate for younger children," the report noted.

The GAO found at least 103 children under the age of 4.

But the agencies still had a problem: Their computer systems often did not flag when a child was separated from his or her parents. As a result, it wasn't always possible to verify that crucial fact. ORR said that Homeland Security sometimes did not provide the information.

Before the agencies made changes "data systems did not include a designated field to indicate that a child was unaccompanied as a result of being separated from his or her parent," the GAO found.

The report found that 2,217 children who were part of the court case had been released from federal custody as of Sept. 10. About 90 percent of them reunited with a parent, although some were placed with sponsors.

According to a recent report from the American Civil Liberties Union about 250 children are still in government custody.

In a formal response to the GAO report, Homeland Security highlighted progress reuniting families, improvements to its computer systems and better coordination with health officials. HHS did not provide a formal response.

Rep. Frank Pallone, D-N.J., who requested the GAO investigation, said in a statement that it paints a picture of chaos and lack of internal communication within the Republican president's administration.

"The gross failures detailed in this report will be long remembered, but hopefully never repeated," Pallone said.