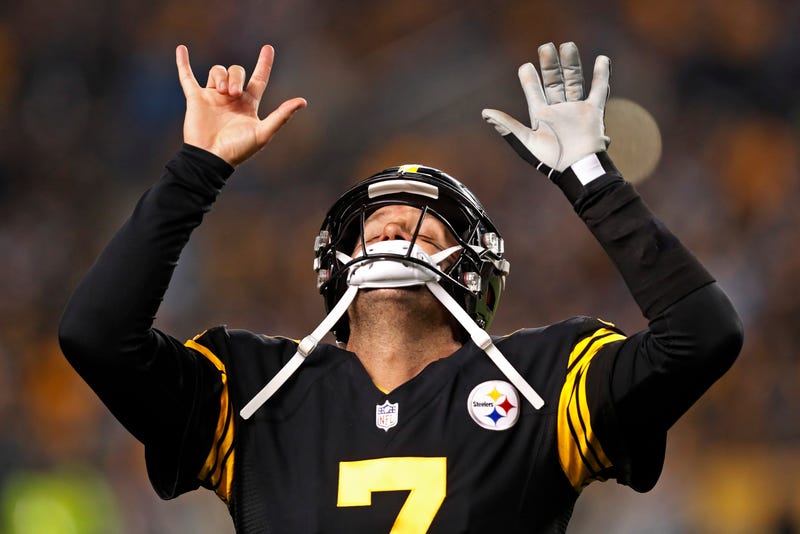 PITTSBURGH (AP) — Ben Roethlisberger's first pass went for a touchdown. His last did the same. And in between the Pittsburgh Steelers quarterback and his red-hot team put together systematic 52-21 dismantling of Carolina on Thursday night that left little doubt about their depth and their talent regardless of whether Le'Veon Bell ever shows up for work or not.

Ten different Steelers touched the ball on offense. Six of them scored. None of them were named Bell. While the three-time Pro Bowl running back tweeted his thoughts from home while waiting — and waiting — to sign his one-year franchise tender, Pittsburgh ripped off its fifth straight victory with stunning ease.

"Really big performance against a really good team on a short week so there is a lot to be proud of," Steelers head coach Mike Tomlin said. "But we are probably not that good."

Maybe not, but Pittsburgh (6-2-1) looked every bit the part of legitimate contender in the AFC, perhaps for the first time this season.

Roethlisberger completed 22 of 25 passes for 328 yards and five touchdowns while posting a perfect quarterback rating of 158.3. James Conner, who has filled in capably during Bell's self-imposed sabbatical, ran for 65 yards and a score before being evaluated for a concussion late.

Antonio Brown added eight receptions for 96 yards — including a 53-yard touchdown in the second quarter — to cap an eventful day that began with the star wide receiver being cited for reckless driving after police clocked Brown's Porsche driving over 100 mph down a busy highway in the northern city suburbs.

"This is what we expected," Roethlisberger said. "We knew we were going to have to put up a lot of points. We did that. The defense, they were playing like their hair was on fire."

Bell has until next Tuesday to sign a contract if he wants to play this season. His teammates have long since tired of talking about Bell's status and at this point.

"I'm not going to comment on someone who's not in the locker room right now," Roethlisberger said.

And why bother? For three hours on Thursday night Pittsburgh looked every bit as potent without Bell as it did with him. If he returns, they insist they'll welcome him with open arms. If he doesn't, they are intent on keeping the train rolling.

The Panthers (6-3) saw their three-game winning streak come to an abrupt halt in a city where they've never won. Carolina fell to 0-4 all-time in Pittsburgh and was never really in it after the Steelers scored 21 points in the game's first 11 minutes.

Cam Newton completed 23 of 29 for 193 yards and a pair of flips to Christian McCaffrey that the second-year running back turned into scores, but Newton's showdown with Roethlisberger never materialized. The Steelers sacked Newton five times and rarely let him get comfortable. McCaffrey finished with 138 yards total offense (77 yards rushing, 61 yards receiving) and accounted for all three Panther touchdowns but it wasn't nearly enough.

"We had a lot of our noses bleeding early on," Newton said. "We've got to stop it and keep things going in our favor. We just got outplayed today."

Newton didn't help matters when he threw off his back foot out of the Carolina end zone while trying to avoid getting sacked in the first quarter. Pittsburgh linebacker Vince Williams raced under the floater and returned it 17 yards for a touchdown to give the Steelers a 14-7 lead they never came close to relinquishing.

Roethlisberger's rainbow to Brown put Pittsburgh up 31-14 at the half and when Roethlisberger found Vance McDonald in the back on the end zone on the Steelers' first drive of the second half, the competitive portion of the evening was over. Pittsburgh's 52 points matched the most ever surrendered by the Panthers in franchise history. Carolina allowed the same total in a 52-9 loss to Oakland on Dec. 24, 2000.

"They did some good things against us," Panthers head coach Ron Rivera said. "We made too many mistakes early on to give ourselves an opportunity to win a football game."

Carolina safety Eric Reid was ejected in the third quarter after being called for targeting when he dived at Roethlisberger's head as the Pittsburgh quarterback was sliding at the end of an 18-yard scramble.

Several Steelers, most of them offensive linemen, took exception with the hit and a brief scrum ensued. Pittsburgh center Maurkice Pouncey said Roethlisberger offered to pay any fines the linemen may accrue for sticking up for him.

Reed, signed by Carolina in September, walked over to Roethlisberger and apologized before being escorted to the locker room.

"I understand the NFL is trying to protect quarterbacks but when they're running the ball they're running backs," Reid said. "I'm not thinking that 'It's Ben, don't tackle him.' There's a guy running with the ball so I'm doing my job."

Roethlisberger and Newton both wore cleats during the pregame that paid tribute to the 11 members of the Tree of Life synagogue that were killed in a mass shooting last month. Roethlisberger's cleats featured the names of all 11 victims while Newton's cleats read "Hatred Can't Weaken a City of Steel."

Panthers: Travel to Detroit on Nov. 18 to take on the Lions. Carolina is 6-2 all-time against Detroit.

Steelers: Visit Jacksonville on Nov. 18. The Jaguars beat Pittsburgh twice on the road last season, including a 45-42 upset in the divisional round of the playoffs.