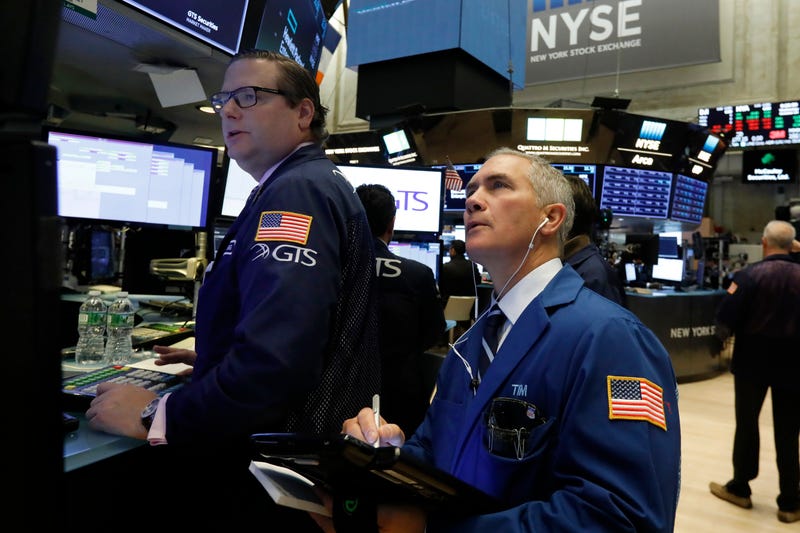 Photo credit Specialist Gregg Maloney, left, and trader Timothy Nick work on the floor of the New York Stock Exchange, Wednesday, Oct. 24, 2018. Stocks are off to a mixed start on Wall Street as gains for Boeing and other industrial companies are offset by losses elsewhere in the market. (AP Photo/Richard Drew)
The Associated Press
October 25, 2018 10/25/2018 2:57 am

BANGKOK (AP) — Shares fell moderately in Asia on Thursday after another torrent of selling on Wall Street sent the Dow Jones Industrial Average plummeting more than 600 points, erasing its gains for the year.

Charts for the entire region were awash with the red that indicates losses, but the declines were mostly in the 2 percent to 3 percent range.

"Coming online with the overtly risk-off backdrop from U.S. markets, investors in the Asian region would be taking the cue to head for the doors," Jingyi Pan of IG said in a commentary.

In New York trading overnight, the Nasdaq composite with its hefty roster of tech stocks bore the brunt of the sell-off, falling more than 10 percent below its August peak, what Wall Street calls a "correction." It slid 4.4 percent to 7,108.40, its biggest drop since August 2011 but is still up 3 percent for the year.

"Investors are on pins and needles," said Erik Davidson, chief investment officer at Wells Fargo Private Bank. "There has definitely been a change in sentiment for investors starting with the volatility we had last week. The sentiment and the outlook seems to be turning more negative, or at the very least, less rosy."

Investors have grown concerned in recent weeks that Corporate America's tax cut-fueled earnings growth this year will fade in coming months amid rising inflation, uncertainty over the escalating trade conflict between the U.S. and China and the likelihood of higher interest rates. Recent signs that the housing market is slowing are fueling speculation that U.S. economic growth will start to slow next year.

Bond prices rose, sending the yield on the 10-year Treasury note down to 3.12 percent from 3.16 percent late Tuesday. The slide in bond yields came as traders sought out lower-risk assets.

Technology stocks and media and communications companies accounted for much of the selling. Banks, health care and industrial companies also took heavy losses, outweighing gains by utilities and other high-dividend stocks.

Most companies that missed earnings expectations or issued cautionary outlooks were punished.

Shares in iRobot plunged 12.3 percent to $80.49 after the robotics technology company said tariffs will reduce its profitability in the fourth quarter.

About 24 percent of the companies in the S&P 500 had reported third-quarter results as of Wednesday. Of those, 57 percent delivered earnings and revenue results that topped Wall Street's forecasts.

High-flying companies like Netflix and Amazon took some of the biggest losses Wednesday. Netflix gave back 9.4 percent to $301.83 and Amazon dropped 5.9 percent to $1,664.20.

AT&T was among the big decliners in the media and communications sector, dropping 8.1 percent to $30.36 after the communication giant's latest quarterly results fell short of Wall Street's expectations.

Boeing was one of the few gainers Wednesday. It rose 1.3 percent to $354.65 after the defense contractor's latest quarterly results topped analysts' forecasts. The company also raised its estimates for the year, citing faster orders for aircraft.

In other trading, benchmark U.S. crude lost 50 cents to $66.34 per barrel in electronic trading on the New York Mercantile Exchange. On Wednesday it edged up 0.6 percent to settle at $66.82 a barrel in New York. Brent crude, used to price international oils, declined 56 cents to $75.61 a barrel.