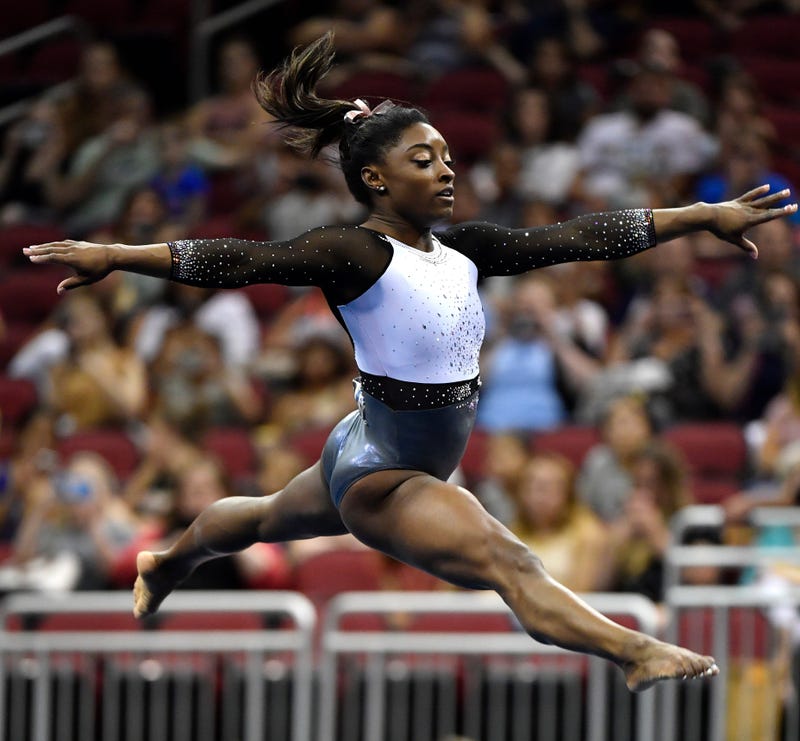 LOUISVILLE, Ky. (AP) — Simone Biles had a lot to feel good about, even with some rare missteps that were quickly forgotten in her latest climb atop another podium.

What mattered most to the world's top gymnast was keeping things moving forward, which Biles did.

The four-time Olympic gold medalist and reigning world champion had an all-around score of 60.000, 2.100 points ahead of runner-up Riley McCusker. Grace McCallum was third at 57.700.

Biles won her 19th consecutive all-around title beginning with the 2013 U.S. Championships. She surged from fifth following the first rotation on the uneven bars into first on the next. She had the highest score in the vault (15.650), though Jade Carey won the event with a two-vault average score of 14.800.

Biles left no doubt in the floor exercise, which generated the most curiosity for what she would add to her top-flight exercise routine.

Biles delivered, unleashing a high-speed punch layout front onto her second flip on her signature move known as "The Biles," a double layout with a half turn. Momentum from the high-energy move sent her out of bounds, though it didn't hurt her score in that segment or overall.

"I definitely wanted to stay in bounds for one routine," said Biles, who smiled at the mistake before getting back at it. "But it's more to work on. I overpowered it a little bit, but I'm kind of happy with it. I'd rather go over than under.

"At least I didn't fly completely off of the floor."

Biles also was third on the balance beam in the first of just two U.S. appearances this year; the second is next month at the U.S. Nationals in Kansas City, Missouri.

Her intense approach to the floor exercise and elsewhere pleased co-coach Laurent Landi and has him confident Biles can grow even more.

"We tried it, and hopefully we can try something else at the nationals," Landi said. "It's mainly for me to see what she can do, to see if it's something we can pushing or something to get away from. It was good."

McCusker, one of Biles' teammates on the gold-medal winning U.S. squad at the world championships, was just as happy with her second-place finish that began with her finishing second on the beam to Kara Eaker.

"I didn't come in expecting anything, just to take it one skill at a time. It was great to start off and hit a beam routine, because that's always a nerve-wracking event to start on, so I was glad I did what I did every day in the gym."

Morgan Hurd, who won the 2017 world championship while Biles took off, won the parallel bars over Sunisa Lee with McCusker and McCallum tied for third. McCallum was pleased on many levels, coming in second to Biles on the floor exercise and improving from seventh at last year's Classic to her best finish at the event.

"I'm really proud of myself," McCallum said. "I've only been doing a full floor routine for a couple of weeks, so it was really nice to make it."

After the meet, McCusker, Hurd and Eaker were among six named to the U.S. Team that will compete in the Pan American Games starting Wednesday in Lima, Peru. Also selected were Aleah Finnegan and Leanne Wong, with Shilese Jones as the non-traveling alternate. The selections are pending approval by the U.S. Olympic and Paralympic Committee.