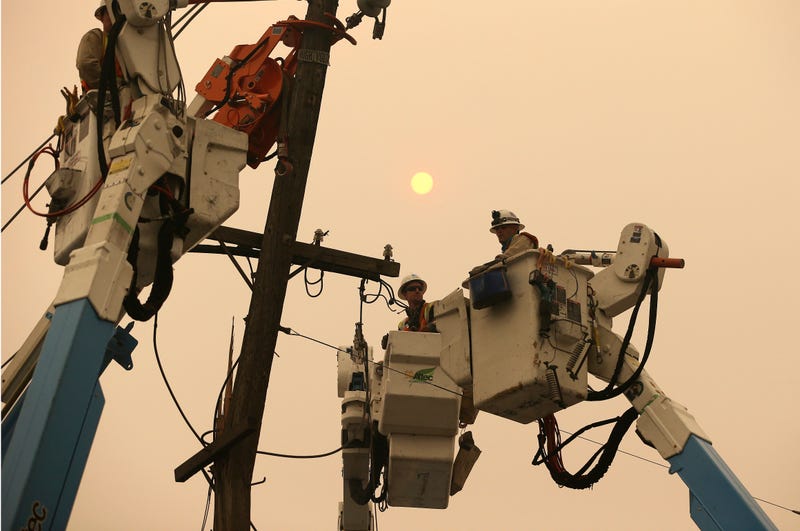 Photo credit FILE - In this Nov. 9, 2018 file photo, Pacific Gas & Electric crews work to restore power lines in Paradise, Calif. PG&E said in a new filing with the state that it determined weather conditions were no longer dangerous enough to warrant a massive power shut off on Nov. 8 - a decision that came as a massive fire was tearing through a Northern California town. (AP Photo/Rich Pedroncelli, File)
The Associated Press
November 29, 2018 11/29/2018 3:34 am

LOS ANGELES (AP) — Some evacuation orders could be lifted early next week for areas devastated by a Northern California wildfire, and residents should be prepared to find bones or bone fragments as they sift through their properties, an official said Wednesday.

The death toll from the nation's deadliest wildfire in a century was steady at 88 people, and 196 are on a list of those unaccounted for, Butte County Sheriff Kory Honea said at an evening press conference.

Honea clarified a previous statement he made claiming that some fire victims might have been "completely consumed" by flames. Experts subsequently informed him that in most cases at least some bone fragments were likely left behind after the firestorm, Honea said.

"There should be remains," he said, adding that people who find bone fragments should not disturb the area and call authorities for potential identification.

Rain moving into the area overnight could delay repopulation plans for next week in parts of eastern and southern Paradise, Honea cautioned. Up to an inch of rain could fall Thursday in the burn zone, potentially flooding some areas and making it harder for crews clearing roads and repairing power lines and other infrastructure.

"It has to be made safe for the general public to get in," Honea said.

If there are no major problems from this week's weather, the early part of next week will be dry, which will be helpful for repopulation, said National Weather Service spokeswoman Cindy Matthews.

The Federal Emergency Management Agency said Wednesday that as many as 2,000 trailers could be used to help house survivors, some possibly as soon as this week. Tens of thousands of people have been displaced by the fire and are seeking help.

The blaze began on Nov. 8 in the parched Sierra Nevada foothills and quickly spread across an area roughly the size of Chicago — about 240 square miles (620 square kilometers) — destroying most of Paradise in a day. Nearly 19,000 buildings, most of them homes, are gone.

Documents filed with the state late Tuesday by Pacific Gas & Electric Co. reveal that flames were already tearing through Paradise when the utility made the decision that improved weather conditions meant it wouldn't have to shut off power to the area as a precaution against wildfires.

Two days before the fire, the utility had warned roughly 70,000 customers across nine counties that it might shut off power due to fire risks from high winds and low humidity.

By 1 p.m. on Nov. 8, the utility determined weather conditions no longer warranted a potential shut-off, according to the Tuesday filing .

The decision came even though a National Weather Service red flag warning remained in effect for Northern California involving "extreme fire conditions" from wind gusts up to 55 mph (86 kph) and low humidity.

The fast-moving fire already had destroyed parts of Paradise and surrounding towns.

"Based on the forecasted information, PG&E no longer anticipated a possible need to de-energize," the filing said. "PG&E immediately informed all stakeholders of the change in conditions and that no lines would be proactively de-energized."

The documents came as PG&E faces lawsuits regarding the cause of the fire that killed at least 88 people and destroyed 13,000 homes.

PG&E has previously reported a power outage occurred on one of its transmission lines around the time the fire began. It also has said a transmission line malfunctioned a short time after the fire sparked, another possible source being investigated by officials.

The power shut-offs are "not deployed as a response to an active fire," spokeswoman Megan McFarland said in a Wednesday email.

However, the utility will de-energize lines during emergencies if requested by state fire officials to protect first responders, McFarland said.

If the utility does discontinue power due to weather conditions, it shuts off distribution lines, not transmission lines that are higher voltage, McFarland said.

Other survivors are being housed in hotels and apartments, some using financial assistance from the government, said Toney Raines, head of FEMA's housing task force.

The order also allows the Paradise Unified School District to continue teaching students at temporary facilities even if the children are now living outside district boundaries.