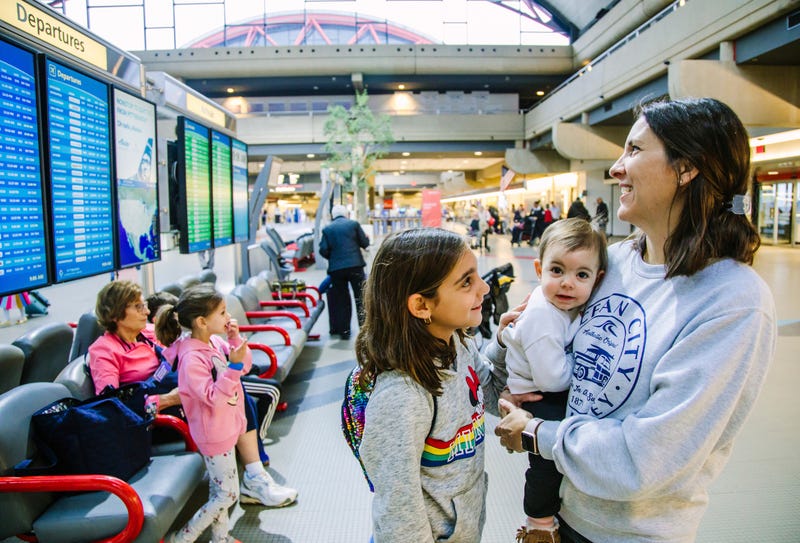 Photo credit Maura D'Alo, right, holds her daughter Maria, 1, while waiting with her family at the Pittsburgh Airport before a trip to DisneyWorld for Thanksgiving on Tuesday, Nov. 20, 2018, in Moon, Pa. Also pictured is daughter Alana, 9, center, Cecelia 5, second from left and mother Kathy O'Tooole. Thanksgiving travelers got help from favorable weather in most of the U.S. on Tuesday, but flight delays piled up at airports around the country by day's end. (Andrew Rush/Pittsburgh Post-Gazette via AP)
November 21, 2018 11/21/2018 2:59 am

Thanksgiving travelers got help from favorable weather in most of the U.S. on Tuesday, but flight delays piled up at airports around the country by day's end.

Wet and frigid forecasts threaten to made driving more challenging in the next day or two.

By late Tuesday, fewer than 180 U.S. flights had been canceled — a low number, all things considered. But more than 3,500 flights were delayed, according to tracking service FlightAware.

The largest number of delays, about 400, was at Seattle-Tacoma International Airport, where dense fog slowed the pace of departures and arrivals. Flights going to Boston and Newark, New Jersey, were also more likely to be delayed, according to the Federal Aviation Administration. So were flights to San Francisco, where visibility has been reduced due to smoke from the wildfire in Paradise, California.

Driving was difficult in parts of New England. The remnants of a recent snowstorm left messy road conditions across much of the region, and the forecast called for more snow on Wednesday followed by blustery winds and high temperatures in the teens on Thanksgiving Day in northern New England.

Rain, with snow in the higher elevations, could slow traffic Wednesday in much of California, Oregon and Washington.

The AAA auto club predicts that 54.3 million Americans will travel at least 50 miles from home between Wednesday and Sunday, the highest number since 2005 and about a 5 percent increase over last year. AAA says 48 million will drive and 4.7 million will fly.

Looking at a longer, 12-day period, the airline industry trade group Airlines for America predicts that a record 30.6 million people will fly on U.S. carriers, up from 29 million last year. That's more than 2.5 million per day.

The airline group expects that Wednesday will be the second busiest day of the holiday period behind only Sunday, when many travelers will be returning home.

Travelers should prepare for long lines at airport checkpoints. The Transportation Security Administration expected to screen about 25 million people between Monday and next Monday, an increase of 5 percent over last year.

The airline group's numbers are bigger because its forecast covers an extra day and it counts connecting passengers again, while TSA only counts those people once when they pass the checkpoint.

TSA says the holiday rush really started last Friday — similar to last year but earlier than in previous years. The Sunday following Thanksgiving is expected to be one of TSA's 10 busiest days ever.