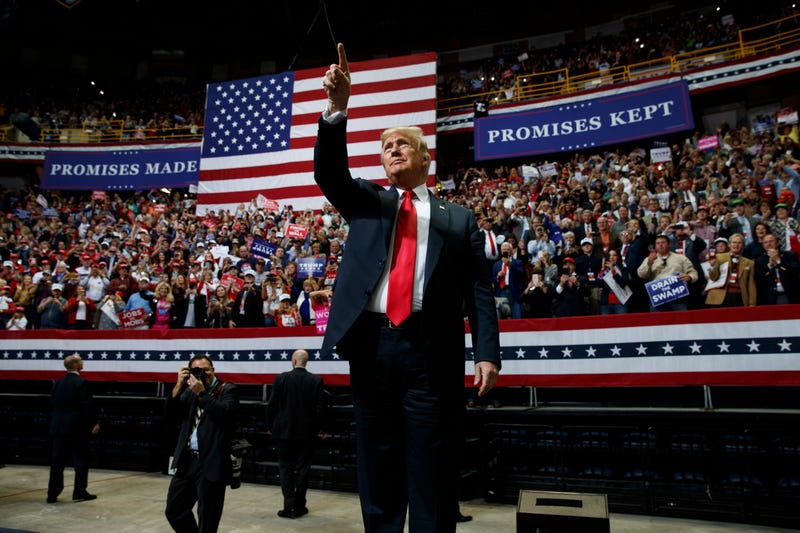 President Donald Trump is urging voters in Tennessee and Georgia to back Republicans in statewide races, warning that Democrats want to destroy the country with high taxes and illegal immigration as well as divisive politics.

As Trump headlined two rallies on the last Sunday before midterm elections, Democrats turned to former President Barack Obama for their closing argument. Appearing in Gary, Indiana, and later in Chicago, Obama warned Democrats not to be distracted by lies and fear-mongering.

Meanwhile, former New York Mayor Michael Bloomberg said he was pumping another $5 million in national advertising into the final two days before the midterm elections. He's urging voters to support Democrats because of his concern about "the direction of our nation."

Singer Lee Greenwood's hit "God Bless the USA" has been a standard at President Donald Trump's events ever since he announced his campaign for president.

For Trump's rally Sunday night in Chattanooga, Tennessee, ahead of midterm elections, Greenwood appeared on stage to deliver the song in person.

Trump expressed surprise after Greenwood sang as the president took the stage, yet Greenwood's participation had been in the news for hours before the evening rally. In fact, a Trump campaign statement earlier in the day noted that the president "will be pleased" to have Greenwood perform in person.

Trump told supporters: "I didn't know Lee Greenwood would be here. That was a surprise."

President Donald Trump is campaigning for Georgia's Republican gubernatorial candidate, Brian Kemp, who is locked in one of the tightest races in the country.

Trump praised Kemp at a rally Sunday in Macon as a "strong man" and "strong personality" and says Kemp will be a great governor.

He's also going after Kemp's Democratic opponent, Stacey Abrams, calling her "one of the most extreme far-left politicians in the entire country."

The Georgia race has garnered attention from a list of high-profile backers, including Oprah Winfrey, who campaigned for Abrams last week.

Trump says that Winfrey was a friend of his until he ran for office but is now urging Georgia voters to listen to his endorsement instead of hers.

Trump has a second rally in Chattanooga, Tennessee, later Sunday. The midterm elections are Tuesday.

President Donald Trump is blasting central American countries, including Honduras and El Salvador, for failing to stop the caravans of migrants trying to make their way to the U.S.

Trump is complaining at a rally in Georgia that "we pay these countries hundreds of millions of dollars" even though "they don't do a damn thing for us."

He says, as he has before, that he wants to cut U.S. aid to the countries, threatening that "we'll be stopping very soon."

Trump has made the caravans and illegal immigration a centerpiece of his closing argument as he tries to rally his base ahead of Tuesday's midterm elections.

Trump is telling the caravans to turn back and insisting they will not be allowed in.

He's again labeling their efforts "an invasion" and says, "We're not playing games."

President Donald Trump says the final sprint before Tuesday's midterm elections reminds him of the days before his 2016 win.

Trump told a rally crowd in Macon, Georgia that "there's electricity in the air like I haven't seen since '16."

Trump told the crowd in Georgia to turn out to vote, joking that he "wouldn't say" the election is "as important as '16, but it's right up there."

Trump was joined by former University of Georgia football coach Vincent Dooley, who thanked the president for keeping his promises.

President Donald Trump appears to be distancing himself from the fate of House Republican candidates two days before the midterm elections.

Trump told reporters as he left the White House en route to a pair of rallies Sunday that he thinks "we're going to do well in the House, but as you know, my primary focus has been on the Senate, and I think we're doing really well in the Senate."

Trump is also telling reporters that Republican enthusiasm is off the charts and that the "level of fervor" is very high.

And he's crediting the dozens of rallies he's held on behalf of candidates, saying that they "have really been the thing that's caused this big fervor" to start and to continue.

Trump will be holding rallies in Georgia and Tennessee on Sunday.

In prepared remarks for a speech Sunday at an interfaith prayer lunch in Chattanooga, Bredesen said Trump will "have plenty of derogatory things to say about me."

Bredesen says politics "is a blood sport — but I've come here to show that there are other ways to campaign and to present your case to the people of Tennessee."

He says, "We should vote people in and out, not shout them in and out."

With two days left before polls close, President Donald Trump is traveling to two traditionally Republican states as he looks to help put GOP candidates over the top.

Trump is throwing his political muscle behind Republican statewide candidates ahead of midterm elections that could dramatically reshape his presidency.

The GOP is facing greater headwinds in the House of Representatives.

Trump's final sprint will take him Monday to Ohio, Indiana and Missouri.

He plans to spend Election Day conducting get-out-the-vote interviews with local media at the White House, where he is set to watch returns come in.

This story corrects a reference to Democratic candidate Phil Bredesen of Tennessee, who is running for the U.S. Senate, not for governor.