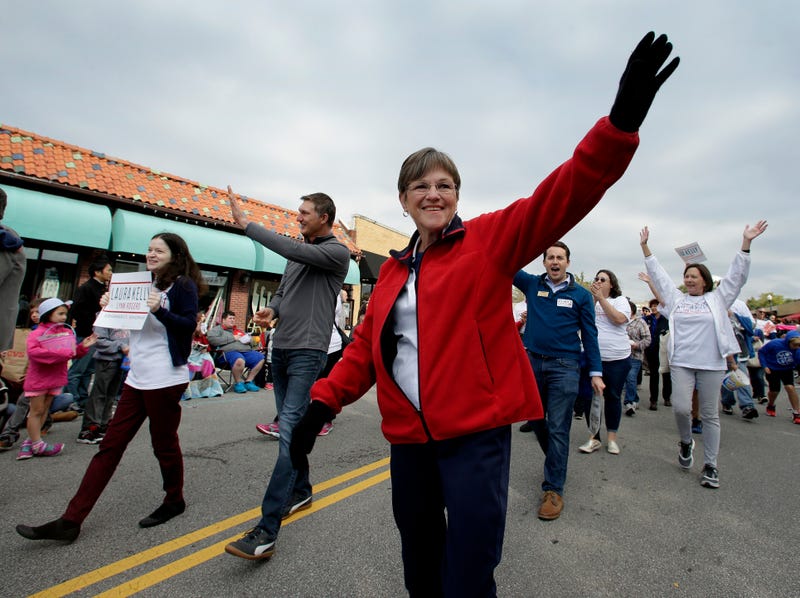 Photo credit FILE - In this Saturday, Sept. 29, 2018 file photo, Democratic candidate for Kansas governor, Laura Kelly, walks with supporters during the Overland Park fall festival parade in Overland Park, Kan. Kelly supports expanding Medicaid coverage in her state to include more lower-income adults without children. But the authority to expand Medicaid rests solely with lawmakers, which is likely to remain under the control of Republicans who largely oppose it. (AP Photo/Charlie Riedel)
The Associated Press
October 29, 2018 10/29/2018 10:56 pm

The Legislature, despite being dominated by Raimondo's fellow Democrats, was reluctant to support it, citing the cost. The governor ended up with a pilot program at just a single college.

It wasn't the only time her agenda had been frustrated by lawmakers.

"The fact of the matter is, every governor wishes the legislature would do everything they want," Raimondo said. "But it doesn't happen, you know. It's the way it works."

Raimondo's experience is a cautionary tale for supporters of the record number of women, most of them Democrats, who are running this year for governor.

Even if many of them end up winning, it will not necessarily translate into a sea change in state priorities. In some cases, they will have to work with a legislature dominated by the opposing party or one that is politically divided. Even lawmakers of the same party don't always fall in line with the governor's plans.

Christine Todd Whitman got a firsthand taste of that as governor of New Jersey.

Despite delivering on a campaign promise to reduce personal income taxes, she nearly had her 1997 re-election derailed by a dispute over auto insurance rates.

Her fellow Republicans in the legislature torpedoed her plan to overhaul insurance regulations, which would have given cost breaks for motorists who were willing to give up their right to sue for pain and suffering after an accident. On the campaign trail, she was hammered by her Democratic opponent for failing to lower rates.

Whitman later worked with Democrats on another proposal that ultimately passed with bipartisan support.

"You are judged on what you get done," Whitman said. "The executive branch is different from the legislative branch in that way. You can't just talk about it; you have to deliver."

Just six women are serving as governor and no more than nine have ever served as governor at the same time, a mark that was set more than a decade ago. More than half the states — 28 — have never elected a woman as governor.

This year, 60 women ran for governor in the primaries, with 16 advancing to the November election. All but four of those are Democrats.

The surge in women running for office has been fueled largely on the Democratic side by the 2016 presidential election and actions by the Trump administration and Republican-led Congress on health care, taxes, immigration, Supreme Court nominations and other issues. Expectations are high among activists that these women, if they win, will usher in sweeping changes at the state level.

But a governor's job is often constrained by outside forces, and promises made on the campaign trail can be particularly hard to keep.

Medicaid expansion is one example. Democrats Stacey Abrams in Georgia and Laura Kelly in Kansas support expanding Medicaid coverage in their states to include more lower-income adults without children.

But the authority to expand Medicaid rests solely with lawmakers, and the legislatures in both states are likely to remain under the control of Republicans who largely oppose it. Medicaid expansion is one of the key parts of former President Barack Obama's health care overhaul and has provided health coverage to roughly 12 million Americans in the 33 states that opted for it.

Abrams and Kelly said they will try to persuade their respective legislatures, nevertheless. Both are veteran lawmakers who have built relationships with Republicans over the years. Kelly said it's her history of working across the aisle that will help her be successful if she becomes governor.

"I have 14 years of established relationships in the legislature and the confidence and the trust of my moderate Republican friends," Kelly said. "They will be there when I am in the governor's office."

Even where their agenda might be thwarted, governors still retain the power to veto legislation they oppose.

In an email to supporters expressing frustration with then-Judge Brett Kavanaugh's nomination to the Supreme Court, Abrams cited the importance of stopping attempts to constrain abortion, marriage equality and voting access. She vowed to be a "firewall" and "fight every single day to make sure that Georgians' hard-fought rights are not stripped away."

In Michigan, Democratic candidate Gretchen Whitmer recalled a 2013 vote when she was in the legislature as an example of the type of legislation she might be able stop as governor.

Male Republican lawmakers were supporting a proposal requiring women to have separate insurance for abortions. Whitmer blasted the legislation, which eventually became law, saying her colleagues continued to "ignorantly and unnecessarily weigh in on important women's health issues that they know nothing about."

In her campaign against Republican Attorney General Bill Schuette, Whitmer says having more women involved in policy decisions will be better for both men and women. For example, she said everyone in a family benefits when a woman earns an equitable wage and has access to quality health care.

In Rhode Island, Raimondo's disappointments have been balanced by a number of successes.

She said her experiences as a mother influenced some of her priorities as governor, such as successfully pushing for all-day kindergarten across the state and increasing access to pre-kindergarten after watching her children thrive in such programs.

"I think that that has made me a better governor," Raimondo said. "I think the point is people deserve a governor who is going to fight for everybody."