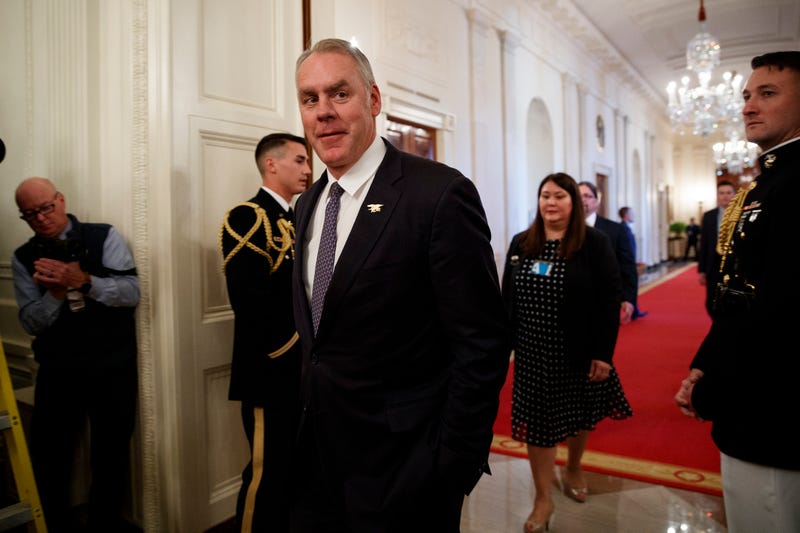 Photo credit FILE - In this Oct. 24, 2018 file photo, Secretary of the Interior Ryan Zinke arrives for an event with President Donald Trump on the opioid crisis in the East Room of the White House in Washington. Zinke says he’s “100 percent confident” no wrongdoing will be found in pending ethics investigations that have stirred speculation he could get ousted from Trump’s cabinet. (AP Photo/Evan Vucci, File)
The Associated Press
November 13, 2018 11/13/2018 1:59 am

The former Montana congressman and Navy SEAL faces a number of probes by federal investigators, including one involving dealings between a foundation Zinke created and the chairman of an energy company.

In an interview with The Associated Press, Zinke said he has spoken in recent days with Trump, Vice President Mike Pence and White House Chief of Staff John Kelly about the probes and they remain supportive. He denied any wrongdoing.

"I'm 100 percent confident that every investigation will always end up in the same conclusion, which is that I follow all rules, procedures and, most importantly the law," Zinke said. "I have no desire to leave. I know I'm effective and doing the right thing."

Capitalizing on their victories in last week's election, Democrats plan to launch their own investigations into Zinke in January, when they take the majority in the House.

Arizona Democratic Rep. Raul Grijalva, who is poised to become chairman of the House Natural Resources Committee, told the AP he wants the committee to investigate Zinke as well as the administration's pro-industry policies, which Grijalva said has profited mining, oil and gas and other companies.

"It's the conflicts that are inherent in that policy — who it favors and the undercutting of basic environmental laws," Grijalva said. He said he intends to expand the committee's staff to have the capacity to handle the investigations.

Grijalva said he's particularly troubled by the Montana land deal, which involves a foundation Zinke created and the chairman of Halliburton, a major player in the energy industry that has frequent dealings with Interior.

At least one of the pending investigations against the Interior secretary has been referred by Interior's inspector general to the Department of Justice, according to AP sources. That move signaled a potential escalation of the investigations.

Zinke said Monday he was not notified of the referral and described communications between federal prosecutors and the inspector general's office as happening routinely. He asserted that the investigations stemmed from complaints by Democrats and "radical groups" opposed to the administration's agenda to increase energy development on public lands.

Within the administration, Zinke said there's a belief that he's drawn so much criticism because he's been effective at "rolling back a lot of the regulations that were adverse to industry."

"The more effective you are, the more fire you get," he added. "The president understands."

Industry leaders and Republicans in Congress have remained supportive of Zinke notwithstanding the stream of investigations.

The president of the oil and gas trade group Western Energy Alliance said there's "no doubt" environmental groups are eager to take down Zinke, after being emboldened by the ouster of former Environmental Protection Agency Administrator Scott Pruitt. Pruitt also had a suite of ethics investigations.

But the Colorado-based group's president, Kathleen Sgamma, said even if Zinke's enemies succeeded, they would be equally disappointed once one of his deputies stepped into the position. She pointed to Zinke's second in command, Interior Deputy Secretary David Bernhardt, a former lobbyist including for oil and gas interests.

"The regulatory agenda will continue," Sgamma said. "The House can make things difficult for Interior officials by taking up their time in oversight hearings, but they don't have any real levers to change course since the Senate remains in Republican hands."