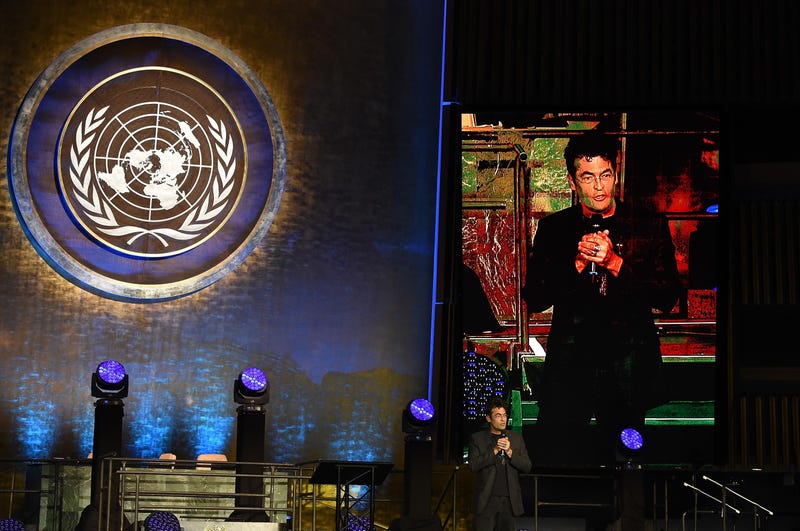 Many artists use nature in their works to not only celebrate the planet’s beauty, but also to highlight the impact humans have on Earth.

Through painting, sculpture, photography and various forms of mixed media, environmental artists are creating thought-provoking pieces which address everything from climate change and pollution to consumerism and biodiversity.

The German artist started as a painter before using natural objects to create installations which transform into “dreamlike realms.” One of his most famous works is the cover design for Peter Gabriel’s OVO album in which Udo collected tree trunks to form a nest-like structure and placed a child in its center.

“By installing plantings or by integrating them into more complex installations, the work is literally implanted into nature,” the 82-year-old said in a statement. “As a part of nature, the work lives and passes away in the rhythm of the seasons.”

In1982 land artist Agnes Denes planted and harvested a 2 acre field of wheat in a vacant lot in Manhattan #womensart pic.twitter.com/vUtuCTC53c

Considered a pioneer of environmental art, Denes’ 1968 Rice/Tree/Burial performance piece, in which she planted rice seeds, chained trees together & buried a time capsule, is considered to be “ the first large scale site-specific piece anywhere with ecological concerns."

But it was her 1982 Wheatfield – A Confrontation - that featured 2 acres of wheat planted in a landfill across from the World Trade Center in NYC  - that is considered her masterpiece.

“It was a triumphant moment in time, a confrontation of human greed, mismanagement and complaisance that have since remained the same or worsened,” Denes said of her artistic achievement.

"It's just one straw, said 8 billion people" With my latest piece, I wanted to find a unique way to showcase the threat that our ocean and future generations are under. It took us 6 months to collect 168,000 straws recovered off the streets of Vietnam with the help of @zerowastesaigon and @starbucksvietnam to build this piece. If you enjoy it, please check out our video on the link in my bio ☝️☝️ #strawpocalypse #laststraw

The Canadian photographer started out as an engineer but has since become known for his hyper-realist style. The 32-year-old has now made conservation and social impact projects his priority. One of his most recent pieces involved collecting 168K straws from the streets of Vietnam to highlight plastic pollution in the oceans.

The British artist is known for his site-specific sculptures made from natural materials (rocks, ice, leaves, rocks) and then documents how they change with the passage of time. “It’s not about art. It’s just about life and the need to understand that a lot of things in life do not last,” the 62-year-old said.

Inspired by Andy Goldsworthy, Shilling also makes installations from natural materials in the environment, which  He then photographs using only ambient light and no Photoshop enhancements. His work has been described as “exploring themes of existence, transience through an ever-deepening relationship with nature.”

A quote from a fellow artist: "Nothing prepared me for the hypnotic & loving way you framed the story & then brought us into an intimate wonder & fascination with the intelligent design of these remarkably wise, caring & sensitive creatures lives" @gmalkin https://t.co/oE6UPdO54d pic.twitter.com/M1T5x6Xmda

The Seattle artist/filmmaker takes photographs made from garbage and other discarded items like computers and phones to showcase the negative impact American consumerist culture has on the environment.

His most recent work is a short film entitled ALBATROSS, which deals with the effects of pollution on the seabirds.

“The immense scale of our consumption can appear desolate, macabre, oddly comical and ironic, and even darkly beautiful; for me it’s consistent feature is a staggering complexity,” Jordan said.

news
Pictures of downtown Minneapolis on day 1 of the Derek Chauvin trial
sports
WATCH: Yadier Molina teaches Astros non-roster invitee not to run on him after taunt
sports
Brandon Brooks has reportedly been discussed in Eagles' trade talks
music
Rita Wilson 'grateful' for her health one year after she and husband Tom Hanks were diagnosed with COVID
music
Vote on the 'Top 7 @ 7' songs with Rob + Holly
news
Shop these 5 women-owned businesses on Amazon for International Women's Day