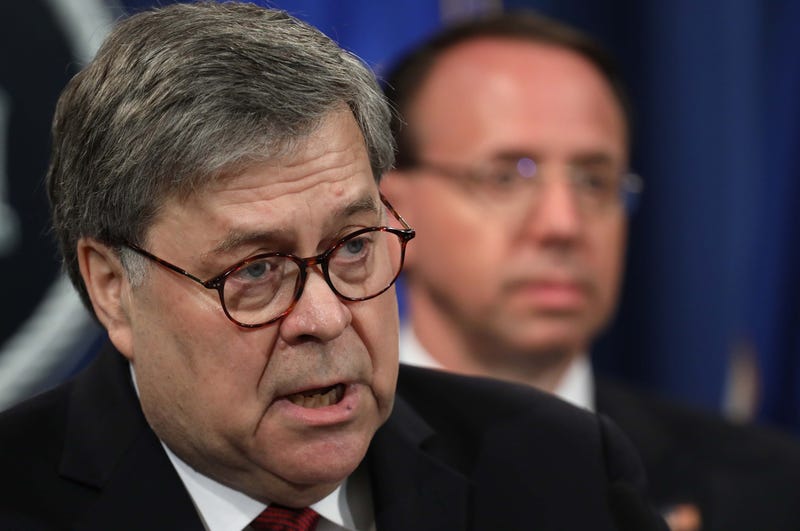 3:18: That's a wrap for today. Barr is scheduled to back before the house tomorrow morning, although there is still a chance that may not happen after he took issue with a plan by chairman Jerry Nadler (D-NY) to have lawyers question him with than members of congress.

He then had this exchange with Richard Blumenthal:

Blumenthal: Did anyone, you or anyone on your staff, memorialize your conversation with Robert Mueller?
Barr: Yes.
Blumenthal: Who did that?
Barr: There were notes taken of the call.
Blumenthal: May we have those notes?
Barr: No.
Blumenthal: Why not?
Barr: Why should you have them?

Lindsay Graham cut things off before it went any further, but certainly made it sound like Mueller would be coming to testify before the committee in the future.

2:46: A smile from Bill Barr! Ted Cruz (R-TX) told him that if he was trying to hide anything in the Mueller report he did a bad job by releasing it. It provoked an audible laugh from Barr who has looked uncomfortable throughout.

2:26: Barr has looked flustered a few times during the hearing, but maybe not more than when Kamala Harris (D-CA), asked if anyone in the White House had ever asked or suggested he investigate anyone. After not answering for several seconds he eventually said "I don't know."

.@KamalaHarris: "Has the president or anyone at the White House ever asked or suggested that you open an investigation of anyone?"

Barr stumbles over his answer before saying he's "trying to grapple with the word 'suggest'" pic.twitter.com/SKpDTzVIbu

1:45: Barr, under questioning from Richard Blumenthal (D-CT) is continuing to try to have things both ways. On the one hand he acts as a thorough lawyer using exacting standards to define crimes of conspiracy and obstruction, on the other he shrugs off whether he knows about the investigations that came from the Mueller report because "there are a lot of investigations."

1:18: Ben Sasse (R-NE) is traveling an interesting road with his time. He wants to know if it's illegal for foreign nationals or foreign government to pay an American citizen for something not related to American politics and then have that citizen work for an American political campaign. Barr just isn't saying definitively whether that is currently legal or illegal, which speaks to some of the larger issues raised by the Mueller report.

1:06: Amy Klobuchar (D-MN) is the first of the 2020 presidential candidates to question Barr. Klobuchar is asking about whether President Trump's insinuation that Michael Cohen's family committed crimes could be considered an attempt to get a witness to change his statement. Barr flatly says no. He says the same of the finding that the President's personal lawyer told Paul Manafort he would "be taken care of" if he didn't flip. To say Klobuchar is incredulous would be an understatement.

1:02: Barr is sticking to his line that he cannot say why Mueller did not choose to make a judgment on obstruction. It's starting to sound like the only person who can answer the question as to why that judgment wasn't made is Mueller himself.

11:51: And we're on break for an hour. Feel free to enjoy these baby goats in pajamas while you wait.

11:41: Barr said he wouldn't characterize what Mueller thought about whether the Office of Legal Counsel opinion that a sitting president could not be charged with a crime. Mueller did however seem to characterize what he thought about that, writing "this Office accepted OLC'slegalconclusion for the purpose of exercising prosecutorial jurisdiction."

11:37: Under questioning from Mike Lee (R-UT) Barr confirmed that, as far as he knows, the investigation began because of Papadapolous's statements. Lee however, is continuing to push on the FISA warrant used to surveil former Trump campaign advisor Carter Page and what role the Steele Dossier played in that warrant.

11:26: Barr is insisting that what Mueller took issue with in his March 24 summary letter was not with the summary itself, but with the way that summary was reported on.

11:19: John Cornyn (R-TX) is also taking up the Steele Dossier and got Barr to admit that he can't say if the dossier was or was not a piece of disinformation put out by the Russian government.

11:10: Patrick Leahy (D-VT) is taking issue with Barr's statement that President Trump "fully cooperated" with the investigation based on Mueller's findings that the President did not testify and attempted to get former AG Jeff Sessions to un-recuse himself and stop the investigation into the 2016 election. Barr is standing by his statement that none of that means the President did not fully cooperate.

11:04: Chuck Grassley (R-IA) is opening up by suggesting that the Steele Dossier was the basis for opening the FBI investigation into the Trump campaign. Worth noting here that according to both Mueller's report as well as memos coming out the House under a Republican majority found that it was not the dossier but George Papadapolous' statements to an Australian diplomat that caused the FBI to open the investigation.

10:53: Feinstein is pressing Barr on a key claim in the Mueller report that President Trump tried to get White House counsel Don Mcgahn to have Mueller removed for "conflicts of interest" and then state that Trump never asked him to do that. But Barr insists that in his estimation what the special counsel found was not sufficient to prove obstruction. Barr, as he did in his letter and press conference is parsing using some legal specifics, saying that the President may have tried to get McGahn to have Mueller removed for conflicts of interest but that didn't mean he tried to end the investigation by "firing Mueller" because another special counsel could have been appointed to replace him.

10:32: Barr is going a bit off-script in his opening testimony including a claim that Mueller never explained to him why he chose not reach a prosecutorial judgment on obstruction despite Barr asking. He also said that Mueller said three times his decision not to charge the President was not just because of Office of Legal Counsel guidance that a sitting president cannot be charged with a crime.

10:20: Diane Feinstein (D-CA), the ranking Democrat on the committee is using her opening to contrast Barr's March 24 letter and his April press conference with specific sections of the Mueller report, all of which senators will likely ask Barr about as the day goes on. But she also used her time to once again call for Mueller himself to testify. If you have eight or ten extra hours to spare you can read the entire Mueller report here.

10:07: Committee chairman Lindsay Graham (R-SC) is opening the proceedings by praising Robert Mueller and running through his many professional accolades. But he's also using his time to once again focus on Hillary Clinton's use of a private email server during the 2016 presidential campaign and former FBI agent Peter Strzok in what may be an indication of what direction Republicans plan to take the hearing.

Attorney General William Barr testifies today before the Senate Judiciary Committee on special counsel Robert Mueller's report on Russian interference in the 2016 election and possible obstruction of justice by President Trump. You can listen live to Barr's testimony here.

Barr's characterization of Mueller's report in both a March 24 letter and an April 18 press conference and the subsequent release of a redacted version of the report caused opposing reactions from Democrats and Republicans. Democrats focused on what they say is obvious evidence of obstruction of justice and Republicans focused on Mueller's finding that the President's campaign did not engage in a criminal conspiracy during the 2016 campaign and his choice not to make a prosecutorial judgment on obstruction of justice, a choice that led Barr to go the extra step of saying in his judgment the President could not be charged with obstruction based on the evidence..

Complicating matters though is a report last night from the Washington post that it is not just Democrats taking issue with Barr's statements about the Mueller report, it's Mueller himself. The special counsel wrote a letter to Barr in March which read in part that Barr's public statements "did not fully capture the context, nature, and substance" of his work. That is sure to provoke questions from senate democrats about what they already feel was a misrepresentation of Mueller's findings.

In his prepared opening remarks released last night Barr plans to say that he had to make public statements that the President would not be charged because the department of justice's only duties are to determine whether or not a crime has been committed and if that crime can be proven by the evidence. And because of the importance of the case for the public some determination had to be reached. Essentially: If Mueller would not reach a conclusion on whether a prosecutable crime had been committed, he would have to in order to uphold the duty of the DOJ.

The hearing is almost certain to provoke some testy exchanges, but they may be heightened by the presence of three senators running for president: Kamala Harris (D-CA), Cory Booker (D-NJ) and Amy Klobuchar (D-MN), all three of whom asked pointed questions of Supreme Court Justice Brett Kavanaugh in the fall.

This is will be the first of two days of testimony by Barr as he is set to appear before the house judiciary committee on Thursday.