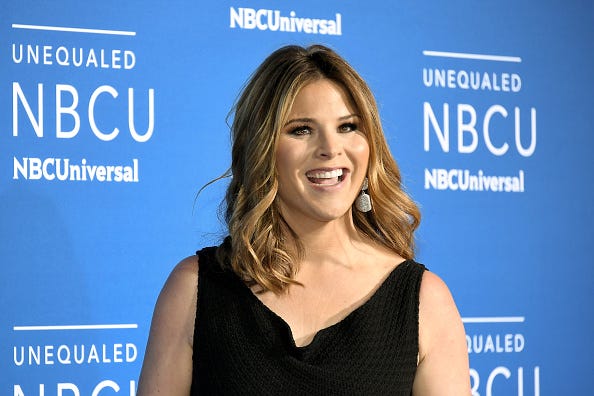 The “Today” show seems to have a serious case of baby fever these days!

Just a week after Hoda Kotb announced that she’s adopted her second daughter, Hope Catherine, Jenna Bush Hager has revealed that she’s well into her pregnancy with her third child.

Monday morning’s show involved conversations about everyone’s holiday weekends, during which Hager announced that her kids, Mila and Poppy, “got something else” in their Easter baskets. A clue was planted among their gifts indicating that they would be getting a new sibling.

Mila and Poppy are VERY excited to have a new little brother or sister on the way and @jennabhager revealed which it’ll be on @hodaandjenna this morning! Link in bio for the details. (📷: @photonate)

“I’m only telling people because Mila and Poppy found out yesterday in their Easter baskets," she said of the big reveal. The girls have apparently been telling everyone the news, so it was time word came from Hager herself.

In terms of how far along she is, Hager said, “Y’all I’m very pregnant, so I don’t know how I hid this.” With a box full of blue balloons. Hager revealed she would be having a boy.

Understandably, hosts of the show have been making jokes left and right about there being something in the water in the studios with all of the baby announcements flying around!