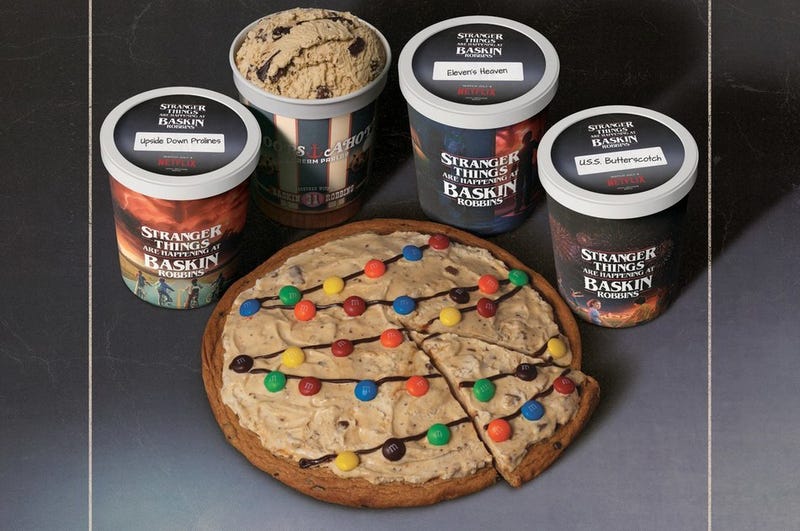 Things are about to get a lot sweeter in the Upside Down.

Fresh off the re-release of New Coke, Baskin-Robbins is piling on the Stranger Things bandwagon, releasing a slew of Stranger Things-inspired ice cream flavors and treats to celebrate the launch of the show’s upcoming third season.

Starting in June, fans can channel their inner ‘80s teen with two new flavors of the month.  Eleven’s Heaven, a waffle cone-flavored ice cream with chocolate-coated sugar cone pieces and a chocolate icing ribbon, and Upside Down Pralines, which features a chocolate-caramel flavored ribbon inside chocolate ice cream with pralines.

In case you are not a fan of the Netflix series, Eleven is one of the main characters and the Upside Down is the scary parallel universe that haunts the cast on the sci-fi show.

The ice cream brand also has a bunch of other sweets to make things even stranger.

There’s nothing to fear in the Upside Down sundae, which is literally turned on its head with all the toppings on the bottom, and a Demogorgon Sundae, which is made in the image of the show’s monster. If it gets too hot, fans can also cool off by enjoying Elevenade Freeze, USS Butterscotch Quarts or a Byers’ House Lights Polar Pizza Ice Cream Treat.

Baskin-Robbins will also whet everyone’s appetite with an Elevenade Freeze National Sampling Day on Sunday, June 9th from 3:00 to 7:00 p.m. at participating locations across the country. West Coast fans will have the added bonus of being able to enjoy a Scoops Ahoy ice cream truck, which is a reference to the ice cream parlor on the show.

If you are looking for collectibles, you can pick up fresh-packed ice cream in four limited-edition containers featuring Stranger Things designs.

"We wanted to give fans a taste of the new season of Stranger Things and are thrilled to partner with Netflix to give customers across the country an experience straight out of Hawkins, Indiana," Baskin-Robbins said in a press release. "Whether you love the show or just love some seriously delicious ice cream creations, we've got something for everyone."

While you can enjoy the show-inspired treats and merchandise starting in June, fans will have to wait a little longer to binge the series as season three of Stranger Things premieres July 4th on Netflix.