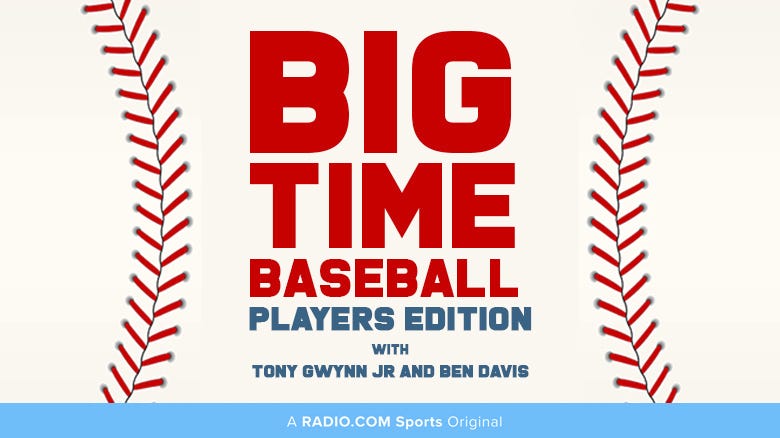 In the first-ever episode of RADIO.COM’s “Big Time Baseball, Players Edition” podcast, hosts Ben Davis and Tony Gwynn Jr. dissect the Los Angeles Dodgers’ dominance, which has been fueled by Cody Bellinger’s MVP start to the season. The Dodgers’ slugger is hitting .394 with 17 home runs and 44 RBI. He leads the majors in batting average, on-base percentage (.478), slugging percentage (.765), hits (67) and runs scored (43).

“The challenge that was issued from [Dodgers manager> Dave Roberts [in spring training> was, ‘Hey, you gotta hit lefties and righties equally,” Gwynn said. “With two strikes, he is just a different hitter. He’s no longer trying to max out on his swing. He’s shortening up; he has a two-strike approach — and this is both against lefties and righties.

“What isn’t spoken about a lot when it comes to Cody Bellinger is not only is he a terrific athlete on the defensive end, but the kid can run. He’s got potential to be a 30-30 guy when it’s all said and done. …. There’s not a player better in baseball.”

Davis and Gwynn also discuss the hot hitting of Christian Yelich, the uncertain futures of pitchers Madison Bumgarner and Zack Greinke and the “tanking” problem baseball appears to have with the Baltimore Orioles and Miami Marlins.

“Time is definitely on [the Orioles’> side with that ballpark,” Davis said. “It’s a beautiful place. But I don’t see how it’s even possible, it’s almost a crime — no offense to the players — to have the ownership group put a team like this on the ball field every day.

“The whole ‘tanking’ thing. You’d think it’s something that it’s OK to do in basketball because you know you’re gonna get somebody that’s gonna be there at the NBA level the following year. …. If you tank and get the first overall pick in baseball — maybe you draft a high school kid — he’s not gonna be there for four or five years!”

The guys wrap things up with Radio.com Sports’ insider Joe Girardi joining them to talk managers on the hot seat and the evolution of catching.