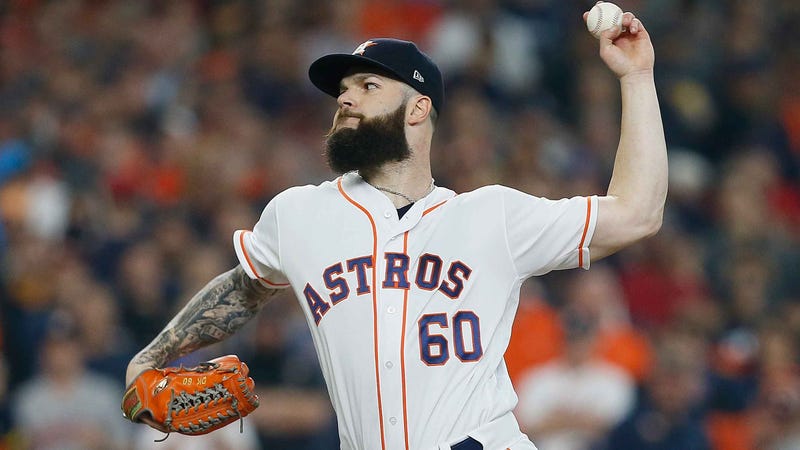 In the latest episode of RADIO.COM's "Big Time Baseball" podcast, Josh Lewin and Jon Heyman discuss the possibility of the first-place Tampa Bay Rays signing Keuchel after breakout pitching star Tyler Glasnow went on the injured list this weekend due to a forearm strain. Keuchel, the former Cy Young Award winner who pitched the past seven seasons for the Houston Astros, remains unsigned.

"The Rays are looking at Dallas Keuchel," Heyman said. "They've been connected to (free-agent closer Craig Kimbrel) already. That shocked a lot of people, but I think that is true as well. They've looked at it. They're not one of these teams that are near the luxury tax threshold as we know. They're at the very bottom of the salary standings as a matter of fact, and it's a credit to them. They've been able to put together such a good team already at such a low payroll."

The Rays enter Tuesday with a surprising half-game lead in the AL East over the New York Yankees, thanks in large part to an MLB-leading 2.96 ERA. Glasnow was a major part of that, with a 6-1 record, 1.86 ERA and 55 strikeouts in 48.1 innings.

Lewin and Heyman also break down Mike Fiers' no-hitter for the Oakland A's, Matt Harvey's regression, Madison Bumgarner's future with the San Francisco Giants and the potential for a Washington Nationals fire sale amid their lackluster 16-24 start.

"I don't think you can rule it out at this point. They're certainly not playing like they expected to. It isn't certain whether they're going to be a contender," Heyman said of the Nationals. "It's kind of reminiscent of the year that Boston thought they would be a contender and wasn't and ended up trading (Jon) Lester and Andrew Miller. I'm wondering if (the Nationals) could trade (Sean) Doolittle and maybe even (Max) Scherzer."

news
How to order a Ferrero Rocher Frappuccino at Starbucks
music
‘RHOC’ star Braunwyn Windham-Burke comes out as gay: ‘I’m not attracted to men and I never have been’
music
Multiple 'Real Housewives of Beverly Hills' stars test positive for coronavirus: Report
news
Fauci: COVID will continue to affect lives unless ‘overwhelming majority’ of people take vaccine
music
Lily Cornell debuts beautiful voice with Alice in Chains cover
news
Why you may no longer be able to bring emotional support animals on flights