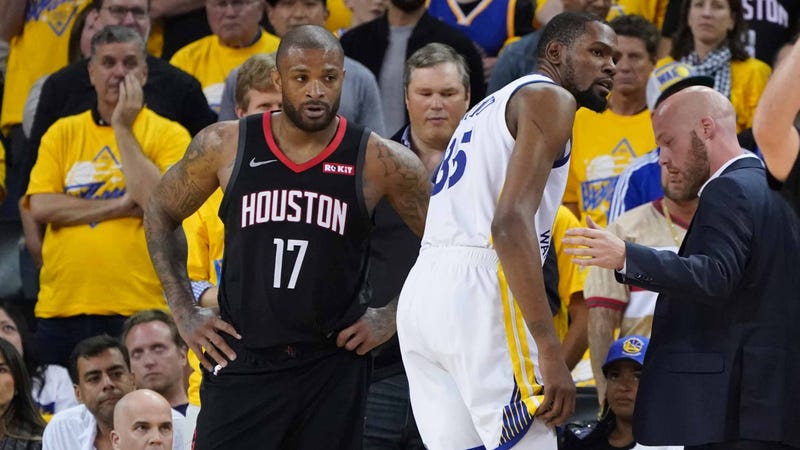 The Golden State Warriors got good news Thursday on superstar Kevin Durant's injury: It's a "mild" calf strain, and they could have him back as early as next week. In the meantime, they will have to finish off the Houston Rockets without him.

The latest episode of RADIO.COM's "Big Time Basketball" podcast breaks down the changing dynamics in this fascinating Western Conference semifinal series. With a 3-2 series lead, the odds remain in the Warriors' favor. But there is a sense that the pressure has shifted to the Rockets.

The Warriors are seven-point underdogs -- the biggest spread they've had under Steve Kerr -- for Friday night's Game 6 on the road.

"Can you imagine the Disaster-ville that it would be down in Houston if Golden State went in there in Game 6 and beat them?" Brian Scalabrine said. "The pressure on the Houston Rockets right now is immense. I can't wait to see how they respond."​​

The conversation turned to the Eastern Conference and the Milwaukee Bucks' 4-1 series win over the Boston Celtics.

Host Matt Steinmetz compared this Bucks team to the 2015 Warriors, the first championship team of this golden era in the Bay Area. And they discussed: How big of a bust was the Celtics' playoff run?