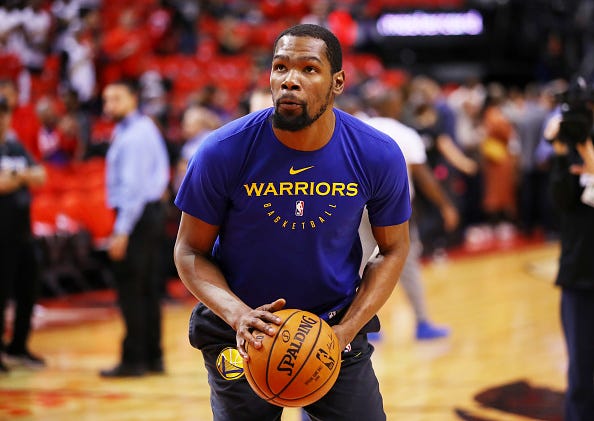 NBA teams are clearing cap space ahead of free agency but there’s much uncertainty as to who will end up where. That includes Kevin Durant, whose Achille’s rupture will keep him shelved for an extended period of time.

Ric Bucher, the longtime NBA scribe and the new Insider for Radio.com Sports joined Brian Scalabrine and Matt Steinmetz to give his insights on the Durant situation.

“What I’ve heard, through various places, is that he’s not really happy with how things went down because of the injury,” Bucher explained.

“There’s an element of, ‘Was I misled as far as injuring myself coming back and playing and having a catastrophic injury like this coming off a calf strain.”

“We don’t know, definitively, exactly what was said, how much was said, how much he was aware of that, but I can tell you that people in the KD camp, people are running for cover because they don’t want to be holding the bag on who led him astray.”

“Because the bottom line is, what Steve Kerr said, ‘We didn’t think he could get injured worse.’ If Steve Kerr was told that, I’m sure KD was told that. And now he’s looking at the prospect of not playing for, possibly, a year and having his free agency upended. I don’t see how that makes him happier with the Warriors than he was before."