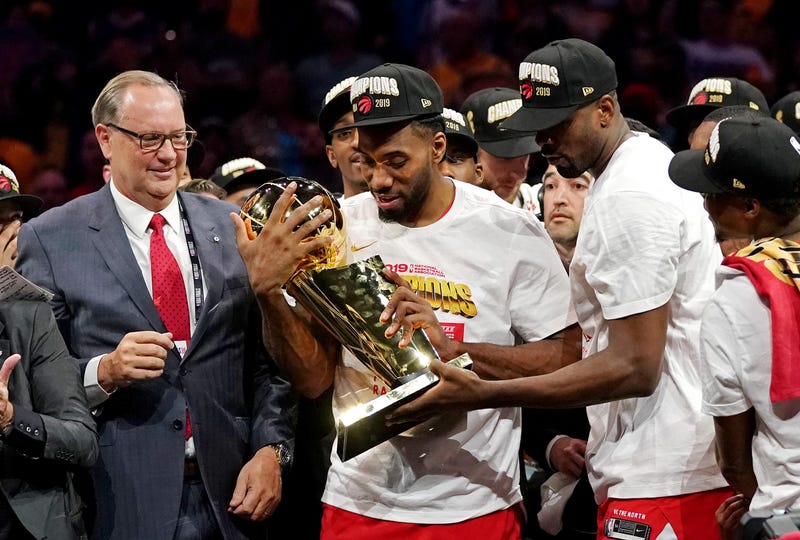 This is going to seem really weird to say aloud, but try it anyway. The Toronto Raptors are NBA champions. The discomfort is certainly not because they were unworthy, but instead because the league, since its inception, has been the tightest membership of any league. The same names pop up through history (Lakers, Celtics, Spurs), saturated runs of dynasties (Bulls, Warriors), and repeat champs (Pistons, Rockets, Heat). Rarely do we have the party crashers, the outliers, the "one great season."

This makes the Raptors' win as interesting as there has been in years for the NBA. Let's count the five most significant ways this may have been the most interesting championship in decades.

1) The Asterisk: The argument that the Raptors' championship needs a qualifier because of the Warriors' injuries is ridiculous. What goes around comes around. In '15 this Golden State dynasty began on the backs of a compromised Cavs team. Cleveland was missing two of its three best players, as LeBron James was forced to drag a unit with Matthew Dellavadova and Tristan Thompson to the finish line. The Warriors never got "an asterisk" for that banner, and neither should the Raps. Yes, Kevin Durant was gone for all but 15 minutes, and Klay Thompson was ultimately gone for crucial Game 3 and the end of Game 6. But those compromising the Raptors' title only do so because they didn't see this title coming and want to rationalize their error. The dynasty ends the same way it starts.

2) The Injuries: Undoubtedly, the Warriors were victims of awful timing. Not only did they lose KD and Klay, but those were the two massive impending free agents on the roster. Even if the Dubs bring them both back (highly unlikely), Golden State would be shorthanded throughout all of next season. The window for the rest of the NBA just opened wide. A squad with Steph Curry, Draymond and spare parts is not a title contender, we just witnessed that. For four years, it has seemed an inevitability everyone else was playing for second place. Now, the league seems as open as ever.

3) The Grind: Steve Kerr alluded to the stress of playing in five straight NBA Finals as a reason for the incredible rash of injuries to befell his team. That may be true, showing why this hasn't occurred since the Celtics of the '60s. The marathon is too long, the season too grueling, the intensity of playoff games too exhausting. When the Warriors won the '17 Finals with KD in such dominant fashion, some said they would rip off a decade of titles. That was never realistic. Yes, the Warriors may be contenders for the next six or seven years with the Splash Brothers and a strong organization, but no roster can keep this up year after year, playing 100+ games annually. This also makes LeBron's EIGHT consecutive Finals in relative full health to be one of the greatest NBA achievements ever.

4) The Claw: Put Kawhi Leonard's postseason up there with some of the most iconic ever. Larry's '84, Magic's '87, Isiah's '89, Michael's '93, Hakeem's '94, Duncan's '99, Wade's '06, LeBron's '16, KD's '17 were historic Tours De Force. Hang this one alongside. From his game-winner against the Sixers to his personal 10-0 run in Game 5's fourth quarter against the Warriors, Kawhi was a wrecking ball in the most important moments. Perhaps he is wired so unemotionally in instances of pressure he can perform at the highest level. Perhaps he is an alien cyborg sent from an intergalactic colony to destroy humans. Either way this one should be in the NBA version of the Louvre.

5) The Belief: Canada has its first NBA title, its first professional championship in one of the four major sports since '93 (Toronto FC dominated MLS a few years ago), and the rest of the NBA's fans should be thrilled. Much of the rest of the league were waiting out the Warriors' run, figuring it wasn't even worth trying to beat them. Instead, Masai Ujiri went all in for a season and it proved brilliant. No, players like Kawhi won't usually be available for a one-year "let's see" rental. But the stranglehold on the title has been broken by an interloper without much basketball history to speak of, outside a towering American market, far from beautiful weather and beaches, which can normally swing free-agent decisions. The Raptors' title, and an absolutely wild NBA Finals, inject even more interest into the NBA, a league that feels like it just had another power booster of popularity especially ahead of a surefire bonkers offseason.

Damon Amendolara, known by his fans as D.A., hosts "The D.A. Show," from 9:00AM-12:00PM, ET, across the country on the nation's largest 24/7 major-market radio network. "The D.A. Show" is known for its unique perspective on sports, tongue-in-cheek sense of humor, colorful listener interaction, and candid interviews with athletes and coaches. Amendolara also appears regularly on NFL Network as part of the "NFL Top 10" documentary film series, CBS television and SNY TV. He is a Syracuse University grad and native of Warwick, N.Y.