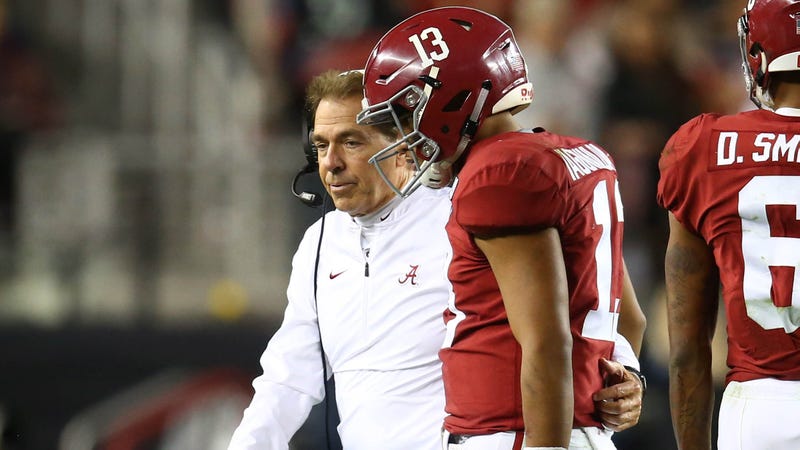 “People can claim now that they saw it coming, but I don’t think anyone saw the rout that we saw last night,” the veteran NFL linebacker-turned-analyst said Tuesday morning on "Taz & The Moose."

“(Alabama) just could not put it together. You got to give credit to Clemson. Their defense was amazing. I think that’s the story of the night. Obviously what Trevor Lawrence did as a true freshman quarterback coming in and just playing flawless was very impressive, but their defense, man, they were on fire.”

Clemson harassed Tua Tagovailoa into two interceptions, including a pick-six on Alabama’s first possession, and allowed just three points over the final three quarters. The Tigers, meanwhile, were on cruise control for much of the second half, as Dabo Swinney won his second national title in three years and handed Nick Saban the worst loss of his tenure with the Crimson Tide.

“No question,” Hawk said. “Everyone always thinks Alabama has the most talent on the field no matter who they’re playing. I think Clemson has an argument for that, no question. (Kirk) Herbstreit even said it toward the end of the broadcast: People are going to study that game and study what Clemson did defensively to try to see how they can slow Alabama down in the coming years. I think (Brent) Venables deserves a lot of credit. And Dabo. They just have a good thing rolling down there in Clemson.”

That likely won’t end any time soon, especially with a true freshman at quarterback. Trevor Lawrence was masterful against Alabama, throwing for 347 yards and three touchdowns with pinpoint accuracy.

“You can draw up a great plan, but last night a lot of times there was some great coverage play by Alabama and he threw the ball where only his receiver could catch it,” Hawk said. “When he’s making throws like that, you got to put your hands up in the air and say, ‘What are we supposed to do? This guy is playing perfect tonight.’”