On the heels of the NCAA denying Hudson a waiver for immediate eligibility after the former Michigan football player transferred to Cincinnati last year, Cincinnati head coach James Fickell called out Jim Harbaugh and Michigan for not supporting Hudson's waiver.

Hudson, an offensive lineman, was appealing for immediate eligibility on the grounds of mental health issues he said he experienced during his two seasons at Michigan. The NCAA denied his original waiver and an ensuing appeal, and Fickell, in recent comments to The Athletic, said Michigan is mostly to blame.

“Here’s what I believe in the whole waiver process: the number one, most important thing, and all the power, comes from the school that a kid is leaving. No matter what. (Michigan) didn’t back the waiver. They can say what they want to say, but the only thing they said that was positive was that if the NCAA chooses to make (Hudson) eligible, then they would accept it — that they didn’t have an angle. They are just trying to cover their ass. And I’m really, completely disappointed in it.

Fickell, a former player and coach at Ohio State who took over at Cincinnati in 2017, said he got a "cold" response from Harbaugh when he called him in the offseason to ask whether he would back Hudson's waiver. In contrast, said Fickell, when Cincinnati landed transfers from Alabama and Ohio State this offseason, both Nick Saban and Ryan Day helped their former players gain immediate eligibility.

“I called him to say that I don’t know what’s going on with all these waivers, but I know James is here,” Fickell said. “Are you guys going to be vindictive against him, or do you want to help this kid? ...

“All (Harbaugh) said to me was, ‘I’m not going to lie. I’m not going to lie. And I don’t know why we’re talking.’ It was really cold. I talked to Nick Saban because we have a transfer from Alabama. I talked to Ryan Day because we have a kid from Ohio State. We have a kid from Michigan, so I wanted to reach out, not to ask about the kid, but acknowledging that this kid has some issues and are you willing to help him? Or what are you willing to do? And it was pretty cold.” 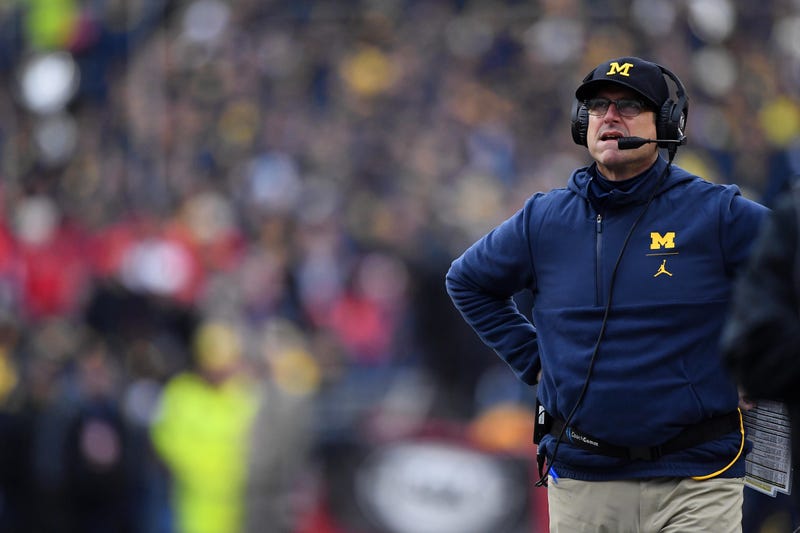 The situation seemed to escalate when Michigan, in a response to Hudson's second waiver request, brought to the NCAA a story of Hudson leaving a liquor store near campus with a "bag of goods," Hudson's mother told The Athletic. She said the story was entirely false.

Fickell blasted Michigan for coming after a player who chose to transfer.

“It’s like a junior-high relationship: ‘You broke up with me, so I’m going to tell everybody that you did this, this and this.’ What grown-up does that?” Fickell said. “They responded with a junior-high comeback. I was shocked. Shocked. That if somebody said something about you, that you would then respond back by trying to bash a 19-year-old on things that were hearsay?

“It sounds a little bit like ‘A Few Good Men.’ Yeah, he was on the first flight out the next morning. That’s why I’m pissed and I want to say something. For you to get in a junior-high battle and say things about a kid, whether you believe him or not, you’re taking shots a kid who is struggling. And who am I to say how much? But he’s struggling, and to say that, it hurt the kid. Big time. It was hard. I know a lot of this stuff should be done behind closed doors, and I’m not calling people out. But when they took a shot at the kid, it was really disappointing. Really disappointing.”

According to The Athletic, Hudson's waiver was denied by the NCAA because a) University of Cincinnati is not within 100 miles of his hometown, and b) there was no documentation of the mental health issues he said he experienced at Michigan. Hudson will be eligible to play again in 2020.

While Fickell also expressed frustration with the NCAA for its handling of the case, he reiterated Michigan set the tone.

“All the power is in the hands of the school a player is leaving. If they want to help, they can help them become eligible,” he said.

Sean Magee, Michigan's director of player personnel and administration for football, denied Harbaugh or UM did anything to undermine Hudson's waiver.

“It’s simply not true,” he said. “This had nothing to do with James as an individual, but again, we weren’t putting ourselves in position over the NCAA to judge who gets a waiver or not. If you look around the country and reasons why stories like this are so prevalent, the NCAA hasn’t shown to this point what the direct precedent is. If people are looking for precedence, you aren’t going to find it.”