Cleveland, Ohio (92.3 The Fan) – Odell Beckham Jr. and Jarvis Landry had to be told by league officials to change out of their cleats at halftime because they didn’t conform to NFL policy or they’d not be permitted to take the field in the second half.

Landry was in gold cleats, Beckham in white with a clown design.

The issue is emblematic of why the Browns are 2-6 following Sunday's 24-19 loss to the Denver Broncos. Perception is reality and the star players appear to be more worried about their shoes and marketing themselves than winning football games.

A team coached with an ounce of discipline would’ve never allowed them to take the field in the first place, but Freddie Kitchens wants to let his players show their personalities, and these are the type of problems that creates.

Kitchens has a team full of individual stars, and that’s about it.

Sunday afternoon in Denver was supposed to save the season. Instead it’s officially shot. Forget playoffs. They’ll be lucky to finish .500.

If you honestly think the Browns are winning out, I have some beachfront property in Denver I’d like to sell you. No team has made the playoffs after starting 2-6 and the Browns hardly look like the team capable of being the first to do it either.

Sports Illustrated declared on the cover of their NFL preview “The Browns are Back!”

Well, it looks like the clown show the franchise has been since 1999 is alive and well, led by Kitchens.

Sunday’s loss marks the fourth straight for the team, and the 12th straight year the Browns have lost at least four in a row. So, at least the Browns remain consistent. Consistently bad.

The playoff drought will go into an 18th straight year and the focus can turn to who will the Browns take in next April’s draft, and who will coach the team in 2020 because it probably shouldn’t be Kitchens.

Brandon Allen, who hadn’t seen an NFL field in the regular season before, looked like a seasoned well-prepared veteran that threw for 193 yards and two touchdowns for Denver against Cleveland’s porous defense.

The Steelers won for the fourth time without Ben Roethlisberger Sunday, yet the Browns can’t win with their premiere talent.

It comes down to coaching, culture and discipline. 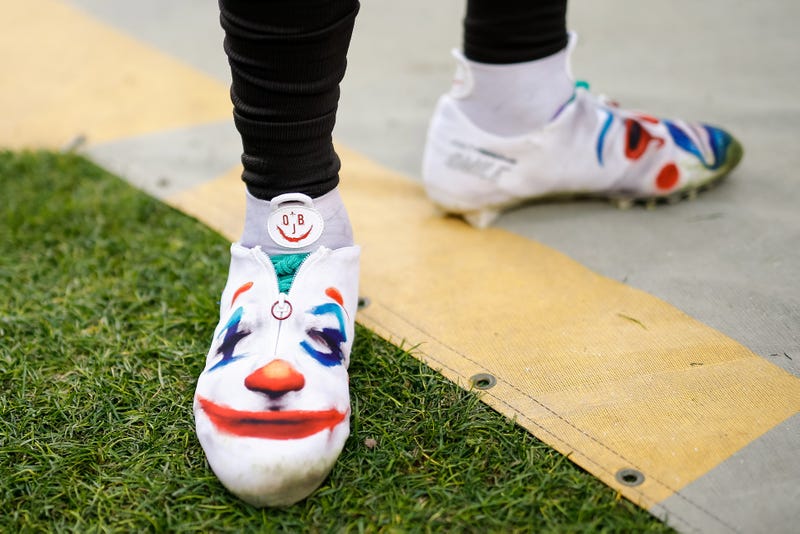 The Browns remain deficient in all three areas because of Kitchens.

Kitchens was handed a goldmine of talent in his first stint ever at any level as a head coach and he doesn’t know how to use it.

The third-and-short and red zone offense is embarrassingly awful. It took until the fourth quarter for Kitchens to realize Nick Chubb should be on the field and not Dontrell Hilliard in those situations.

Baker Mayfield’s numbers were better – 27 of 42 for 273 and a touchdown and no turnovers – but he missed a critical read on fourth down late that saw him throw to Landry over the middle in double coverage, missing Beckham, who was streaking up the sideline with his hand up begging for the ball.

Mayfield does not look like he’s prepared nearly as well as he was last year by the staff during the week, and that too is on Kitchens.

Maybe former offensive line coach Bob Wylie was on to something earlier this year when he ripped Kitchens for taking credit for the team’s success that was the result of the collective work of the staff a year ago.

Beckham finally was able to make a few spectacular catches in the second half, yet they’re both still underutilized. That is on Kitchens.

Five trips into the red zone equaled three field goals, a touchdown and a turnover on downs. Blame Kitchens.

Tight end Demetrius Harris couldn’t control his body to catch a wide-open TD in the back of the end zone, a play they run 100 times a week during practice.

The Browns had 12 players on the field for a kneeldown before the half. A kneeldown!

The lack of attention to detail in their execution remains constant and a problem. Kitchens is to blame for that too.

The season is shot, so showing Kitchens the door now does no good.

But it’s a year and opportunity wasted taking a flyer on someone without the resume to justify having the job in the first place. For that I blame John Dorsey.

Now the miserable march to the end of December begins.

At least the players are comfortable, because that’s what Kitchens felt was most important this year.

If only Kitchens could get his team to pay as much attention to the details week in and week out as they do their cleats, maybe the season would still have some life.