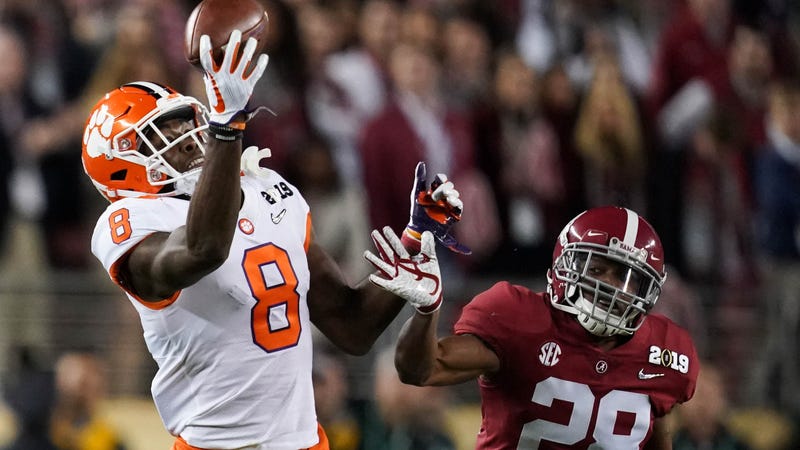 The college football season hasn’t been over for more than a couple of days. Time to start counting down weekends until the 2019 season kicks off on Labor Day weekend.

Here’s a way-too-early preseason top 10, highlighting eight teams that will be best positioned to make a run at the dominating Clemson and Alabama dynasties.

1. Clemson: This one isn’t too difficult. The Tigers dismantled Alabama on Monday night and put the rest of the college football world on notice: The 2019 title is Clemson’s to lose, and it appears it may be that way for quite some time. Freshman quarterback Trevor Lawrence could be the No. 1 pick in April's NFL draft, but rules require him to stay in college two more years. Justyn Smith, who had a phenomenal showing in the playoffs, is back. So is leading receiver Tee Higgins. So is star running back Trevor Etienne, a 20-touchdown, 1,500-total-yard guy. Yes, their otherworldly defensive line takes a hit, but the talent here is still unreal. There’s no reason to think Clemson won’t be back in the title game a year from now.

RELATED: Clemson Is The Undefeated, Undisputed National Champion, and Trevor Lawrence Is a Star

2. Alabama: Clemson did the impossible, making Alabama seem normal. But don’t forget how great their season was before the title game. Quarterback Tua Tagovailoa returns after his Heisman Trophy runner-up campaign. He is joined by his favorite speedy target, Jerry Jeudy, who won the Belitnikoff Award as college football's top wide receiver. Alabama plays a schedule with road games at Texas A&M, South Carolina, Mississippi State and Auburn, all tough places to win. You have to feel a bit sorry for Duke: The Tide start the 2019 season against them and will be looking to get the bad taste of the title game out of their mouths.

3. Georgia: Jake Fromm will be in Year 3 as Georgia’s starting quarterback. He loses three of his favorite targets and reliable running back Elijah Holyfield. But almost the entire offensive line return and should be one of the best in the country. Kirby Smart's Georgia has recruited as well as virtually any program and should be primed for another run at the playoffs.

4. Ohio State: Ryan Day succeeds Urban Meyer, who says he is retiring. It used to be a concerning move when a career assistant was hired to take over a huge program – think Bob Davie at Notre Dame or Will Muschamp at Florida. Now we’re seeing more success in that department – think Dabo Swinney at Clemson or Lincoln Riley at Oklahoma. Ohio State needs to replace a great quarterback with Dwayne Haskins bound for the NFL. Tate Martell or Georgia transfer Justin Fields or should be more than capable of leading the Buckeyes offense. A young defense loses potential No. 1 pick Nick Bosa, who didn’t play the second half of the year anyway, and Dre’mont Jones, but should be improved with another year of experience for the returning players.

Two things I wouldn't be shocked if they happened in 2019:

5. Oklahoma: Have a Heisman winner and go to the playoffs. Rinse and repeat. Lincoln Riley faced this situation a year ago, and helped develop Kyler Murray to replace Baker Mayfield and again reach the final four. The receiving corps will be as good as any group, short of maybe Clemson's, and a defense that was bad in 2018 at least will bring back a ton of experience in 2019. (If Gil Brandt goes 2-for-2 this offseason and Murray returns, move OU up one spot.)

6. LSU: Safe to say that Ed Orgeron’s second stint as a college head coach is going better than his first did. Joe Burrow will be back at quarterback, leading an offense that should be one of the best in the SEC. The defense loses some stars to the draft but brings back All-American safety Grant Delpit. Orgeron has kept the talent pipeline flowing in Baton Rouge. Tigers fans should expect another 10-win season.

7. Notre Dame: The Fighting Irish got laughed at nationally following their semifinal loss in the Cotton Bowl, but a lot of those laughs faded after seeing what Clemson did to Alabama. Defensive stars Jerry Tillery and Julian Love are headed to the draft along with Drue Tranquill, who was the heart of the defense, but Brian Kelly got a huge boost when Julian Okwara and Khalid Kareem decided to return to school for 2019. Trips to Georgia, Michigan and Stanford won’t be easy. Notre Dame’s offense will benefit from starting the year with Ian Book the clear No. 1 at quarterback, though finding a home-run hitter to replace Dexter Williams will be tough.

8. Florida: A bit surprised Dan Mullen didn’t get more love in “Coach of the Year” award voting. He helped guide the Gators to a 10-3 record after inheriting a four-win team. No, they were never in title contention, but knocked off LSU and Michigan and got a win at Mississippi State against a ranked Bulldogs team. They lose a stud at each level of the defense, so getting to the SEC title game in 2019 is a big ask, but expect the Gators to continue to improve and be a tough out for any opponent.

9. Oregon: It’s up to the Ducks to carry the torch for the Pac-12 in 2019. The conference needs a lift in the worst way. Oregon gets a surprise return by quarterback Justin Herbert, who many thought would have been the first quarterback taken in this year's draft, and brings in a relatively monster recruiting class. They open against Auburn in Dallas: A win there would put them in prime position to make a run at a playoff spot.

10. Michigan: Chase Winovich, Rashan Gary, Devin Bush and David Long are all gone from a physical, shutdown defense, but the young talent is there and quarterback Shea Patterson should be even better in Year 2 in Ann Arbor. Can they develop quickly and make a run at a Big Ten title? With Urban Meyer leaving and Ohio State traveling to the Big House in November, it feels like now or never for Jim Harbaugh to finally knock off the Buckeyes.