Let's give them an "A" for effort.

The country needed that broadcast of the NFL Draft Thursday night. There were no parties or tailgates but in our current secluded world it was the be-all, end-all of sporting events. This wasn't a contrived video game competition or game of H-O-R-S-E. This was real-time, real-life. It was as close to the world of sports as we're going to come.

In other words, we will take what we can get even if what we got was the kind of awkward you thought not possible for America's most beloved sport. (Who knew we could have so much sympathy toward Roger Goodell?)

All in all, it was four-plus hours of ... something. Think "The Dundies" from the show "The Office" without the margaritas as "Chilis."

In that spirit, the best way to break this whole thing down is to simply hand out our virtual atta-boys:

THE 'CRINGIEST OF THE CRINGY AWARD'

This one is easy. Goodell. There were the weird wardrobe changes. The mystery of who exactly was handing hin those cards for each pick and if there was actually any writing on any of them. And, worst of all, the commissioner's insistence on turning to his television before every pick and encouraging each team's fans to cheer, boo or whatever. It didn't work when the Draft kicked off and continued to fall flat each and every time the commish's half-hearted plea came about. Think a band asking a room of none to clap along. There you had it.

Roger Goodell gave fans the opportunity to boo him during the virtual draft. I’m way into that. pic.twitter.com/OS4yKBJlMf

That was locked up before the Draft even started: The Burrows family. Since we knew Joe Burrows was going to be the first pick there was a deluge of shots showing just the quarterback and his parents sunk into their living room couch waiting for the Bengals' call. Making the scene even more comfortable was that fact Burrows decided to honor the moment by wearing sweatpants. 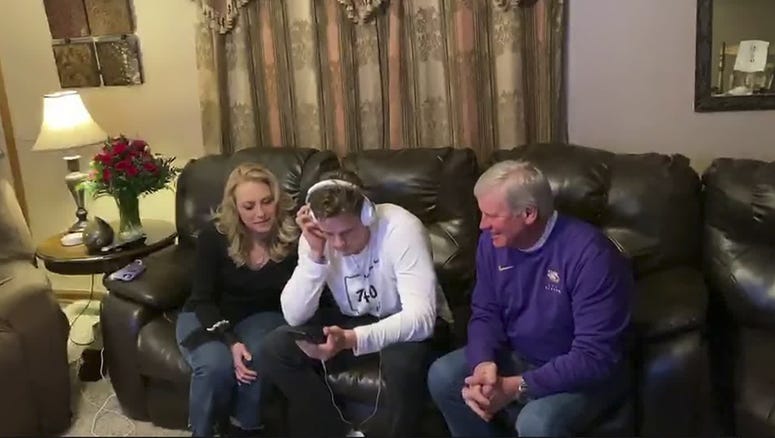 A close second probably went to Jerry Jones' setup, which gave off the vibe that there was a velvet rope five feet in front of him.

There is a lot to pick through here. You had Daniel Jeremiah's enormous "Saw 3" gears in the back of his head. There was the flurry of humblebrags from folks like Michael Irvin (3 Super Bowl trophies), and Sal Palantonio and Josina Anderson (well-placed Emmy Awards). Diana Russini went product-placement with a "Lowes" helmet. Jeff Darlington looked he was pushed into a corner. Ed Werder distinguished himself as the only correspondent holding a microphone (without gloves, nonetheless). Dan Graziano's beard made him look like "Ben" from "Ozark." But it was a subtle move by Louis Riddick that locked up this honor: The early 1980's handheld Mattel football game propped up over his right shoulder. Well done.

This has to be a tie. Of course, both winners are tied to the Patriots. First, there is a combination of New England GM Nick Caserio and head coach Bill Belichick. Between the white walls in Caserio's home office and the enormity of Belichick's table (which hosted three laptops), there was a ton of wasted space.

Here’s how it went down inside our virtual #PatsDraft rooms. pic.twitter.com/1xQdCQr0B1

THE 'THROW CAUTION TO THE WIND AWARD'

This is a no-brainer: Jon Gruden. Not only did he seemingly be the one coach who was circulating in a party of people through his work station, but he also brazenly displayed the Raiders' entire draft. board for all to see.

Jon Gruden has the Raiders entire draft board behind him on the live feed.

You might want to tell him, Raiders fans! https://t.co/WTYwuDBfJ3

THE 'KIDS ARE ALRIGHT AWARD'

At first it was a cute image of Miami head coach Brian Flores hanging with his two sons while calling in his team's pick. But then the kids of virtually every coach and executive started appearing. Some were teenagers who looked like Goodell were slipping them a few bucks to jump in the shots, while others seemed genuinely excited to the point they were high-fiving their dads to celebrate the drafting of an offensive lineman.

@bustedcoverage kids want to get back to Fortnite and TikTok pic.twitter.com/kLjOCTYVjr

This one goes out to all the players who lost the opportunity to dress up and throw their body at an NFL commissioner. Tua Tagovailoa respected the moment with a very well-thought-out suit, although his father's sad trombone reaction killed the mood a bit. 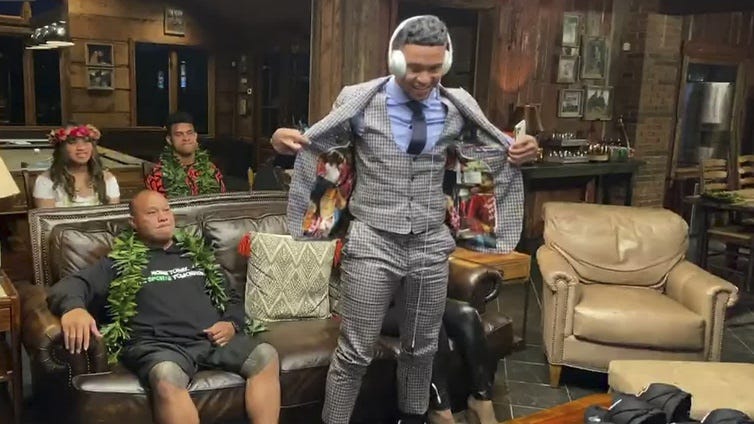 Henry Ruggs III went the other direction thanks to his bathrobe ... 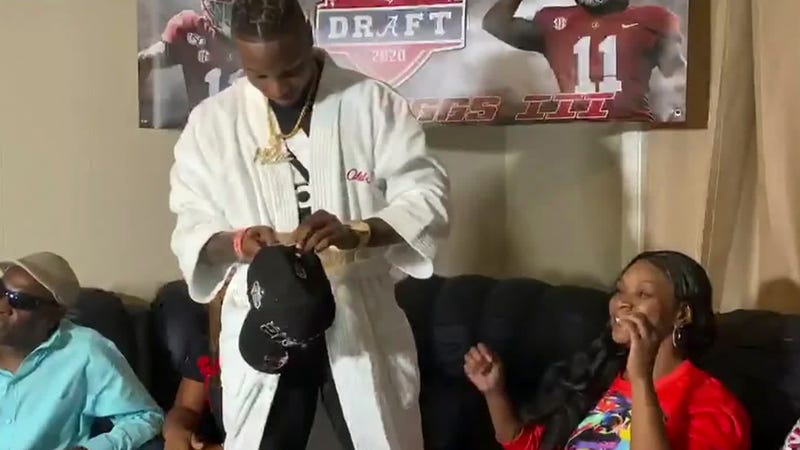 There were also those moments the impatience of quarantine was impossible to hide, highlighted by CeeDee Lamb ...

New Cowboys WR CeeDee Lamb knows to make sure to keep everything away from the defense #NFLDraft pic.twitter.com/nEaCi4iMOL

I’ve said before I thought Kliff Kingsbury looked like Ryan Gosling, and now this pic looks very similar to the house in Crazy, Stupid, Love. pic.twitter.com/9erhUZ8tkF

Vic Fangio is blocking his fireplace

Doesn't everybody have a surfboard in their living room?