They say true faith is to believe in something that you do not see.

That definition is the only way anyone could have much faith in the Patriots offense right now.

Sunday night in Houston the Patriots dropped to 10-2 on the season and behind the Ravens in the race for the No. 1 seed in the AFC playoff picture thanks to a 28-22 loss to the Texans that wasn’t really as close as the final score and had-a-chance onside kick would indicate.

New England actually trailed 21-3 late in the third quarter at NRG Stadium and 28-9 late the fourth as Tom Brady’s offense once again struggled to find any real productive consistency.

It’s a good thing that the Patriots actually proved less than a year ago that an NFL team can struggle after Thanksgiving and find a new identity come playoff time on the way to a Super Bowl ring.

Otherwise, the sky would be falling in Patriot Nation these days as New England’s Brady-led offense continues to drag down the team.

Despite facing the NFL’s 25th-ranked pass defense and 31st unit in terms of third downs, once again Brady was left screaming in frustration on the game field and sideline rather than in celebration. It was competitive emotion that was indeed quite warranted.

Trailing 14-3 at halftime, Brady had completed just seven of 19 throws in the first 30 minutes for 82 yards with an interception for a passer rating of 28.8. Even at the age of 42, when your pass rating is below your age you have a pretty big problem.

“The routine plays aren’t routine anymore,” NBC analyst Cris Collinsworth said of the Patriots passing attack, lamenting the unit’s lack of a big-play outside target or a dominating inside presence like now-retired tight end Rob Gronkowski.

Brady, a guy who used to break records with his performances, has seemingly been a disappointed broken record when talking about his offense all season. His mood, something that’s been a bit of a talking about point in recent weeks, was measured in his postgame press conference when he seemed to have few relevant answers for the questions thrown at him.

“Just execution,” Brady said of the reason for the continued ineffectiveness of the offense. He then sidestepped a query regarding whether it was indeed execution rather than a lack of ability.

“It doesn’t matter,” Brady said. “We didn’t get the job done. A loss is a loss. Try to learn from it and move on.”

But it does matter moving forward. New England has four games to play, including Sunday evening’s AFC Championship Game rematch with Patrick Mahomes and the surging Chiefs at Gillette Stadium. There is also a pre-Christmas meeting with the Bills, a team that held the Patriots to just 16 points in their first matchup in Buffalo and is hanging around just one game back of New England in the AFC East.

Brady’s Patriots are what they are right now. It’s a struggling offense with no obvious answers on the horizon.

Purported savior Isaiah Wynn has been back at his starting left tackle spot for weeks.

And the offense remains questionable. 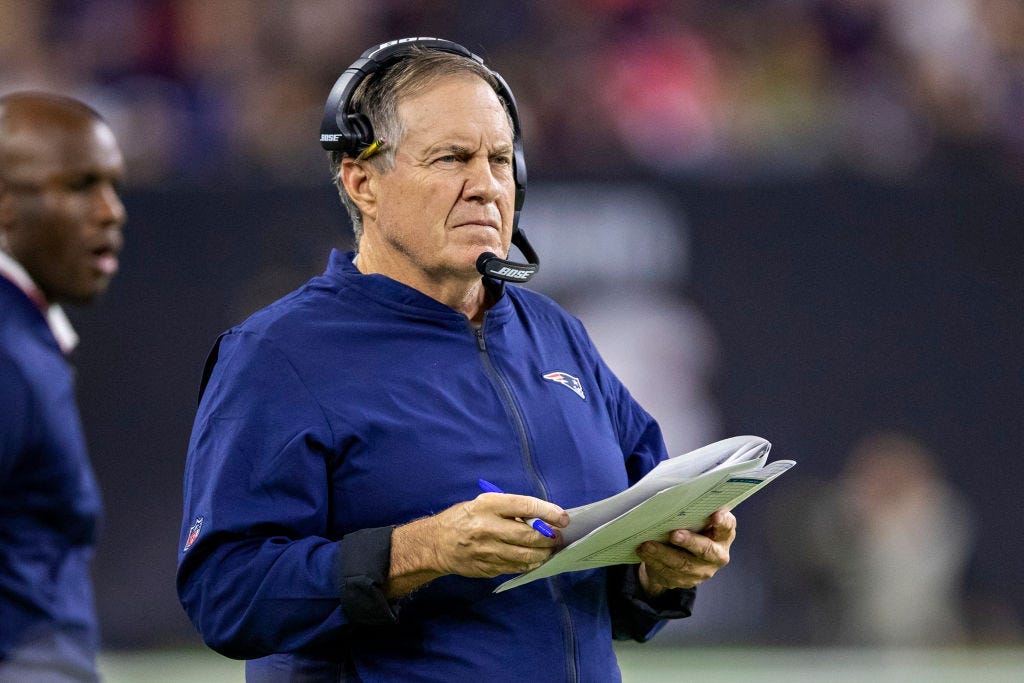 10 Thoughts on Patriots' Loss in Houston

Mohamed Sanu has had time to get up to speed with the New England offense with little to show for it. Sunday night the man New England traded a second-round pick for was a non-factor. Actually he was a disappointment, catching three balls for 14 yards. He had an particularly poor two-play stretch in the third quarter as the Patriots were clawing to stay alive in which he caught a third-down throw short of the sticks and then dropped a would-be first down on the ensuing fourth-down try.

First-round pick N’Keal Harry was also a net negative Houston, failing to fight for the ball on his first-quarter slant route that resulted in the Bradley Roby interception. Harry barely played from that point on.

Even the running game that has been on a minor uptick of late, leading the way for New England’s opening drive to a field goal in Houston, hasn’t produced nearly the boost needed for it to become the backbone of the offense that it became last postseason.

Aside from the never-say-never dream of a stunning return for Antonio Brown – yes, AB was indeed tweeting about a return to New England during the Patriots struggles in Houston – there’s not obvious reason to believe the Patriots offense that’s been lackluster through three-quarters of an NFL season is going to change its stripes down the stretch.

“What it’s been all year,” Brady said of his mindset this point regarding his team’s current lot in life. “Just try to do the best we can do out there and see if we can do a better job in all areas. See if we can get to a good place and put ourselves in a good position.”

The Patriots obviously have the coaching to get the job done, something Belichick and offensive coordinator Josh McDaniels have proven endless times in endless ways over the years.

New England clearly has the leadership at the quarterback position to get the job done, something that Brady has proven endless times in endless ways over the years.

But does the overall offense have the talent to go where the team wants to go in the coming weeks and months?

“Like I said, we’re battling," Brady said. "We’re trying as hard as we can and hopefully we can make enough plays and be the best we can be. It all remains to be seen. You can make a bunch of predictions and so forth, but that is not what it’s about. It’s about going out there and doing it.”

That from a man who declared just a couple days earlier regarding his Michigan Wolverines’ chances in their rivalry battle with Ohio State that, “hope is not a strategy, but I’m hopeful.”

Patriots’ fans now have to hope that Brady’s hope for the New England offense isn’t as equally misguided.

Because hope and faith are all that the Patriots passing attack seems to be able to hang its hat on right now.