The present for Alex Jimenez's 14th birthday was a good one.

His parents were offering to fly Jimenez down to Bradenton, Fla. The destination was notable due to what awaited the teenager: A chance to meet up with old family friend Brock Holt.

Holt was in the midst of his first full professional season after being taken in the ninth round by the Pirates the previous June. Just a few years before the infielder had been playing for Alex's father, Julio, the coach for Stephenville (TX) High, with the manager's son serving as the bat boy. They were going to go to watch their favorite baseball player play, go out to dinner with the former Stephenville star, and then swing over to Wizarding World of Harry Potter at Universal Studios, which was scheduled to open one day after Alex's birthday.

And to cap it all off, Alex was allowed to bring one friend.

"When we were in junior high me and Jarrett, we were best friends," said Jimenez, now 24 years old and a Marquette University law student. "He was always at my house. We were always swimming, playing video games or something like that. My parents said I could bring one person and that one person for me was Jarrett."

"Jarrett" was Jarrett Stidham. Patriots' quarterback Jarret Stidham. You may have heard of him.

Stidham was a logical choice. He was Alex's best buddy. They both shared an intense passion for Harry Potter (going on to shave off a few hours on waiting for the exhibit's trademark ride by skipping the line). And Stidham was no stranger to Holt, having routinely hung out with the much older Stephenville star at the Jimenez home.

So after watching a 9-7 Bradenton win over Jupiter, the entire crew met up with Holt for a dinner, with the Celtics' Game 7 NBA Finals loss to the Lakers playing in the background.

Yes, almost exactly 10 years ago Brock Holt -- one of the most popular baseball players to come through Boston -- was helping blow out candles at a Bradenton restaurant with the young man who has emerged as the most talked-about athlete in the New England sports market. Two kids from Texas. Nine years different in age. Linked in more ways than they could have ever imagined.

"It’s been a cool little journey for those two, for sure,".Jimenez said. "We definitely looked up to (Holt). Brock used to come watch us play when he was in the minor leagues with Pittsburgh when we were in middle school and he would be like, ‘Man, that Jarrett is good.’ Jarrett was so much more advanced than everyone else. All of my friends we all looked up to Brock a lot. He was obviously a great athlete but he was so cool with us. He was always down to earth and humble. It was like he was one of us."

"Jarrett would be over at the Jimenez’s house sometimes whenever I was over there," recalled Holt. "I knew he was a really good athlete. I’ve always been a fan of his and paid attention to what he was doing. You’re more likely to come out of (Stephenville) as a football player than you are as a baseball player. We weren’t really known for baseball. I knew he was a talented quarterback so I paid attention to what he was doing in high school and where he was going in college and if the games were televised I would always try and watch him play. I have always rooted for him and been a fan." 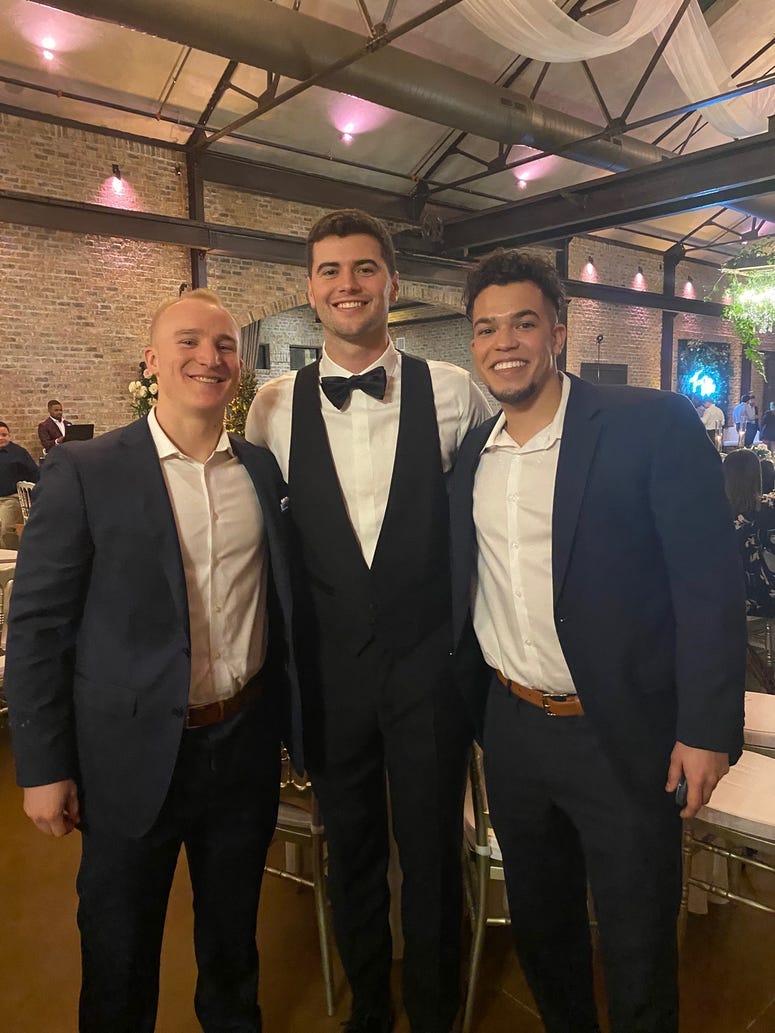 Stephenville is a semi-small town in the middle of Texas, joining a few other locations in the state in dubbing itself "The Cowboy Capital of the World." For place boasting just more than 21,000 inhabitants, it has had its fair share of success stories. Golfer Ben Hogan. Actress/comedian Ruth Buzzi. And Jewell, the singer, lived on a ranch there for a while.

But when it came to professional athletes, the pickings were slim. There was NFL quarterback Kevin Kolb and Holt. And for Jimenez and Stidham only one of those two hung out for video game sessions and pool parties.

"He and my dad are super close," Jimenez said. "I think Brock looks at my dad as a second dad and he looks at me like a second brother. My family and his family, we look at each other as family. When Brock was in high school and I was the bat boy he would invite us to hang out. We were hanging out with high school kids and I was just 6 or 8 years old. It’s so cool looking back because I really looked up to those guys. They were awesome, the whole team.

Holt might have landed in a similar place as Stidham, but their Stephenville stories weren't all that similar.

The former Red Sox and current Brewer had abandoned the be-all, end-all that was high school football.

"Just like you watch Friday Night Lights, that’s what it’s like. Everybody lives for high school football in Texas. Things shut down on Fridays and people get fired up," Holt explained.

I played my freshman year but I hung up the football pads early on. I wasn’t big, man. I loved football. I still love football. I love to watch it. I love to throw the football, run routes, and catch the ball. But I love baseball a lot more. I just wasn’t built to play football. I was a late-bloomer. I mean, my freshman year I was tiny. Maybe 100 pounds. I could run, catch the ball, and get open. But I just wasn’t built to play football. Baseball is what I loved, wanted to do and tried to do. Baseball was the reason I quit. I wanted to play baseball, but I loved football. It just wasn’t in the cards for me. It’s worked out so far."

Stidham? Like Holt, he loved baseball, and like Holt, he was really good at it. But when it came to making that decision heading into the final three years of high school, he was choosing to remain in the spotlight that was playing quarterback for the Yellow Jackets.

"We were in a national baseball tournament but (Stidham) didn’t go so he could go to a football camp. I remember him saying, ‘I’m sorry I’m not going to be there for you guys but this is my dream.’ He went there and look where he is now. Obviously that football camp and all that work he put in is really paying off." 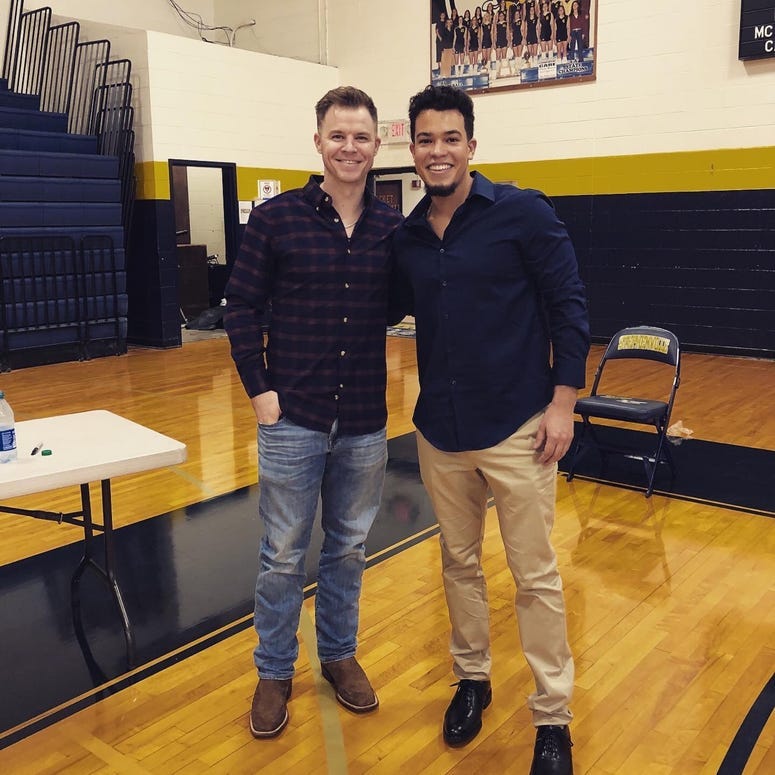 They were two different paths, but in large part due to their shared friendship with the Jimenez family, Holt and Stidham never drifted too far apart.

Last December when Holt was in town to have his number retired at Stephenville High he made it a point to stop by the Jimenez house on Christmas night. And last summer he made it a point to set up Stidham and his buddies batting practice passes and tickets to Fenway Park as part of the quarterback's bachelor party.

And then there was the recent playful back and forth on social media.

"Any time he’s over at the house he’s always asking how I’m doing. It’s not always about him when it really could be because of all of his accomplishments," Jimenez said. "He’s just a really good, genuine, down-to-earth guy. We’re super proud of him.

"And Jarrett is a lot of like Brock. He’s super down-to-earth. He’s just a really good dude, too. It’s crazy. I used to play driveway basketball with this kid and now he’s Tom Brady’s successor. That’s crazy."

Nobody is blind to the pressure Stidham is about to face. But one person he knows he can lean on is that baseball player from his hometown who just so happens to know a little something about the ins and outs of playing in the sports pressure-cooker that is Boston.

"I’m excited for him," Holt said of Stidham. "I know he can be successful. He’s a super-talented kid who works his butt off. It’s a tough situation to be put in but for him, but he can’t look at it as the guy coming in after Brady. Nobody is Tom Brady. You just have to play our game and do what you have been doing your whole life and your whole career. I think he will be successful."

The infielder added, "I hope Jarrett gets a chance to prove what he can do. Shoot, I’m rooting for him. It’s a good place to be, a good place to play. New England sports, Boston sports, it’s as good as it gets. I’m pumped for him and his career. I’m looking forward to watching what does."