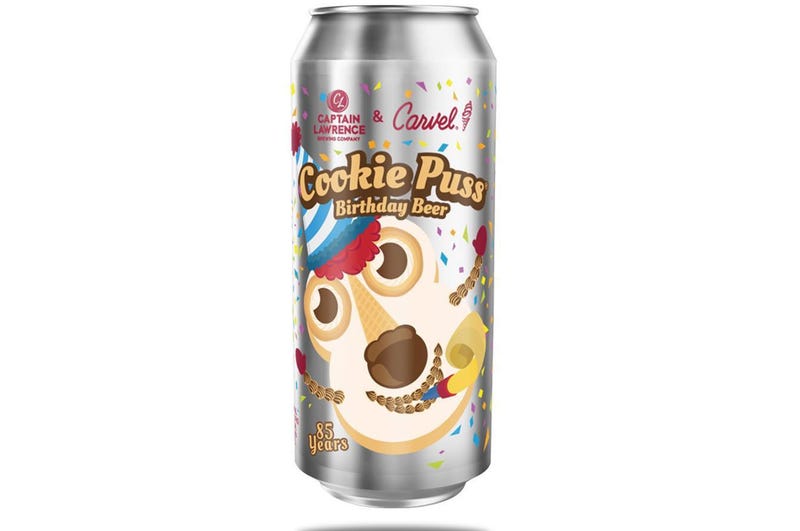 Carvel, of Fudgie the Whale fame, is about to have a big birthday. The ice cream chain that made its name providing birthday cakes for others is turning 85 years old on May 2. And they’re celebrating with a drink. A Cookie Puss drink to be specific.

Earlier this year Carvel partnered with New York’s Captain Lawrence brewery to create two Cookie Puss beers in very limited quantities available exclusively at the brewery in Elmford, New York. But Cookie Puss and his beer are back from Planet Birthday and now they’re going to be available up and down the east coast.

The beer itself is a vanilla milkshake IPA—it’s made with Carvel ice cream and milk sugar, giving it a fuller, creamier body than most IPA’s you’ve likely had.

The wider release was first teased back in February and Carvel and Captain Lawrence were gearing up for St. Patrick’s Day with a Cookie O’Puss Stout, and this week preorders went live. You’ll be able to pick up pints of the Cookie Puss IPA starting on May 2.

Carvel beers have proven to be wildly successful in the past, selling out quickly. So this is likely not the last we’ve seen of this partnership. “We may even already have something up our sleeves,” Carvel president Scott Colwell told Food & Wine. We’d drink a Hug Me the Bear beer. Just saying.