Several Kentucky residents who have contracted coronavirus or been in contact with someone who has tested positive are being forced to isolate themselves with tracking devices.

Two of the individuals tested positive for COVID-19 and the third was a presumptive case, reported the Courier-Journal.

The three Lousiville residents were court ordered to wear ankle bracelets after it was discovered they had been in public against the advice of doctors and refused to self-quarantine.

Stipulations of the order require that the individuals stay home for 14 days and any violations could result in an arrest and criminal charges.

Judge Charles Cunningham issued two of the health-related civil orders upon hearing one of the coronavirus patients was “walking around” and another was out of the house after a call was placed to their residence.

"The home incarceration program is well-suited for this," said Amy Hess,  Metro Louisville’s Chief of Public Services. "It provides us with the proper amount of distancing. We can monitor activity after (the monitoring device) gets affixed to them … to make sure they're not further affecting the community.”

She added: "We would prefer not to have to do it at all.” 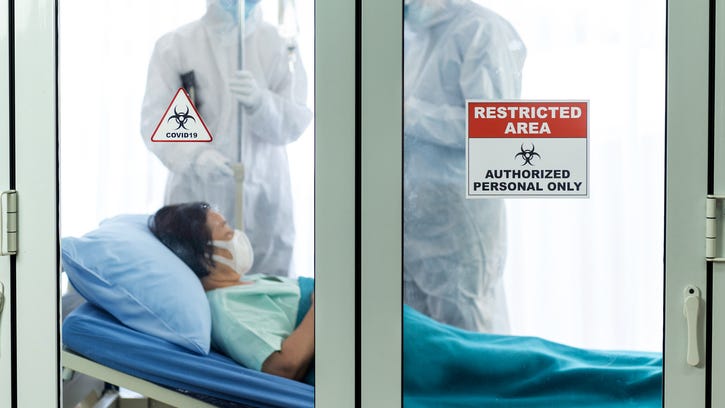 Nurse Battling Coronavirus Says the Pain Is ‘Worse Than a Gunshot’

To further highlight the seriousness of the ongoing spread of the virus, a corrections officer who was sent to attach the monitoring device on one of the individuals has since recorded a high fever and is being tested for COVID-19, according to a rep for the Fraternal Order of Police Lodge 77.

Some have brought up ethical concerns with people who have not been charged with a crime being forced to wear monitoring devices.

But Kentucky law states that county officials have jurisdiction to isolate infected individuals who refuse to shelter at home, the outlet reported.

As of Friday, Kentucky has recorded 831 positive cases of coronavirus, with at least 37 deaths.